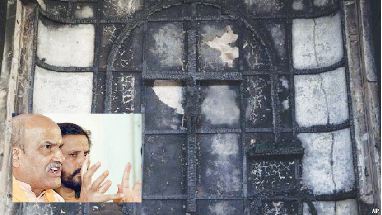 INTOLERANCE: The Amit Shah kind of intolerance was demonstrated by Pramod Muthalik, whose supporters vandalised churches in Karnataka. Muthalik’s supporters also vandalised a pub and assaulted the women there and compares Gauri Lankesh’s murder to a dog’s death

BJP ruled states in particular have not prevented attacks on the minority communities by so-called gau rakshaks and other fanatic groups like Karnataka leader Muthalik’s Ram Sene, and people have been harassed for merely criticising Modi

Studying the last three reports on India released by Human Rights Watch (HRW) (covering a period from 2016 to 2018) shows a pattern of government failure to control growing attacks on Dalits and religious minorities, often led by vigilante groups claiming to be supporters of the ruling Bharatiya Janata Party (BJP) (with the perpetrators sometimes even being felicitated), curbs on free speech, ill-treatment of tribal groups and crackdown on protests.
“Indian authorities have proven themselves unwilling to protect minority religious communities and other vulnerable groups from frequent attack,” said Meenakshi Ganguly, South Asia director at Human Rights Watch, in a statement in 2017, adding that “there needs to be a serious effort to prevent future attacks and to prosecute all those responsible for the violence.” Unfortunately subsequent years show that nothing has changed.
“In 2016, students were accused of sedition for expressing their views; people who raised concerns over challenges to civil liberties were deemed anti-Indian; Dalits and Muslims were attacked on suspicion they had killed, stolen, or sold cows for beef; and nongovernmental organisations (NGOs) came under pressure due to India’s restrictive foreign funding regulations,” says the 2017 report.
The HRWatch report consistently shows that the judiciary that has had to step in time after time both to protect various sections of society and to chastise authorities for misguided action or lack of required action. We bring you excerpts focused on treatment of minority groups and issues related to freedom of expression

2017 Report
Hindu vigilante groups attacked Muslims and Dalits over suspicions that they had killed, stolen, or sold cows for beef. The violence took place amid an aggressive push by several BJP leaders and militant Hindu groups to protect cows and ban beef consumption.
In March 2016, a Muslim cattle trader, Mohammed Mazlum Ansari, 35, and a 12-year-old boy, Mohammed Imteyaz Khan, were found hanging from a tree in Jharkhand state, their hands tied behind their backs and their bodies bruised. In August, a man was killed in Karnataka state by members of a nationalist Hindu group while transporting cows.
In July, four men in Gujarat were stripped, tied to a car, and publicly beaten with sticks and belts over suspicions of cow slaughter.
The government’s continuing failure to rein in militant groups, combined with inflammatory remarks made by some BJP leaders, has contributed to the impression that leaders are indifferent to growing intolerance.
A 2016 report on caste-based discrimination by the UN special rapporteur on minority issues noted that caste-affected groups continue to suffer exclusion and dehumanization. In January, the suicide of Rohith Vemula, a 25-year-old Dalit student, drew renewed attention to entrenched caste-based discrimination in Indian society, and sparked nationwide protests by students and activists calling for reforms in higher education.
In June, a special court in Gujarat convicted 24 people for their involvement in the mass killing of 69 people by a Hindu mob in Gulberg Society, a Muslim neighbourhood in Ahmedabad, during the 2002 Gujarat riots. While pronouncing the verdict, the court called the killings the “darkest day in the history of civil society.” But some victims’ families, lawyers, and rights activists criticised the acquittals of senior BJP leaders and a police official.
Several cases of lynchings made headlines throughout the year where the victims were mostly Muslims. One of the cases of communal violence came to light in early December when a migrant Muslim labourer from West Bengal was hacked to death and burnt by Shambhu Lal Regar, who alleged him of carrying out “love jihad.”So-called love jihad, according to Hindu groups, is a conspiracy among Muslim men to marry Hindu women and convert them to Islam.
2018 Report
Mob attacks by extremist Hindu groups affiliated with the ruling BJP against minority communities, especially Muslims, continued all year amid rumours that they sold, bought, or killed cows for beef. Instead of taking prompt legal action against the attackers, police frequently filed complaints against the victims under laws banning cow slaughter. As of November, there had been 38 such attacks, and 10 people killed during the year.
Two people died in caste clashes between Dalits and members of an upper caste community in Uttar Pradesh in April and May. Between April and July, 39 people reportedly died from being trapped in toxic sewage lines, revealing how the inhuman practice of “manual scavenging” — disposal of human waste by communities considered low-caste — continues.
In June 2017, a fight over train seats turned ugly with religious slurs, accusations of being deshdrohi (antinational) and carrying beef triggering a mob attack on four young boys returning home from Eid shopping in which 16-year-old Junaid was killed.

In July, even after Prime Minister Narendra Modi finally condemned such violence, an affiliate organization of the BJP, the Rashtriya Swayamsevak Sangh (RSS), announced plans to recruit 5,000 “religious soldiers” to “control cow smuggling and love jihad.”
2019 Report
Mob violence by extremist Hindu groups affiliated with the ruling BJP against minority communities, especially Muslims, continued throughout the year amid rumours that they traded or killed cows for beef. As of November, there had been 18 such attacks, and eight people killed during the year.
In July, the government in Assam published a draft of the National Register of Citizens, aimed at identifying Indian citizens and legitimate residents following repeated protests and violence over irregular migration from Bangladesh. The potential exclusion of over four million people, many of them Muslims, from the register raised concerns over arbitrary detention and possible statelessness.
Dalits, formerly “untouchables,” continued to be discriminated against in education and jobs. There was increased violence against Dalits, in part as a reaction to their more organized and vocal demands for social progress to narrow historical caste differences.
In April, nine people were killed in clashes with police after Dalit groups protested across several north Indian states against a Supreme Court ruling to amend the SC & ST (Prevention of Atrocities) Act. In response to a complaint of alleged misuse of the law, the court had ordered that a senior police official should conduct a preliminary inquiry before a case is registered under the law. Following the widespread protests, the parliament passed amendments to the law in August, overturning the Supreme Court order.
In July, police in Ahmedabad city raided an area, home to 20,000 members of the vulnerable and marginalized Chhara tribe, a denotified tribe. According to residents, police allegedly brutally beat up scores of people, damaged property, and filed false cases against many of them.
Tribal communities remained vulnerable to displacement because of mining, dams, and other large infrastructure projects.
In September, the Supreme Court upheld the constitutionality of the biometric identification project, Aadhaar, saying the government could make it a requirement for accessing government benefits and filing income tax, but restricted it for other purposes. Rights groups raised concerns that Aadhaar registration requirements had prevented poor and marginalized people from getting essential services that are constitutionally guaranteed, including food and health care.