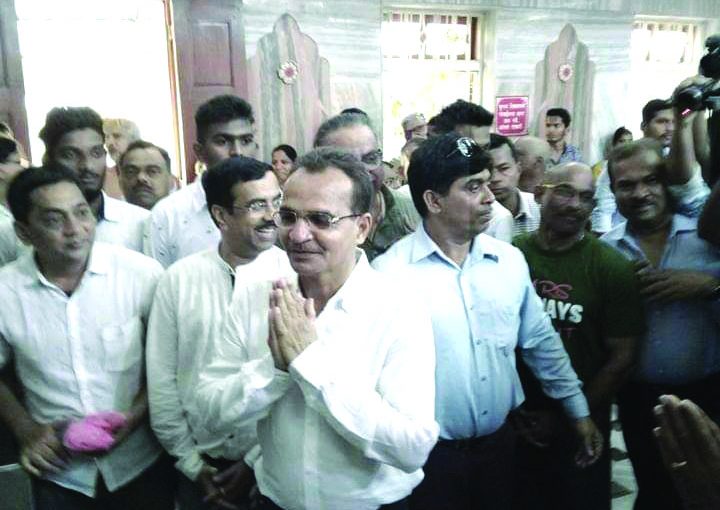 Atanasio (Babush) Monserrate is back with Hosh and Josh: Started his day at the Mahalaxmi Temple seeking blessings from Goddess Mahalaxmi (Goddess of Wealth) before going to the North Goa Collectorate offices to file his nomination papers for Panjim by-elections coming up on May 23; Well-wishers with him include Babu Kavlekar, Ravi Naik, Girish Chodankar, Uday Madkaikar and others

The question arises. Can yesterday’s villain be today’s hero anew? It certainly looked like it. As if 3 are back again for one of Panaji’s most familiar faces in politics — Atanasio (Babush) Monserrate. From the sound of it he also believes he is a Catholic Hindu for he was present with a large crowd of Congress party folk and well-wishers at Mahalakshmi Temple on Friday morning to seek the blessings of whatever gods and goddesses there be before proceeding to file his nomination papers before North Goa Collector and District Returning Officer R Menaka for the forthcoming Panaji By-Elections on May 23, 2019.
After offering his prayers at the main temple dedicated to Goddess Mahalakshmi (Goddess of Wealth) he also visited the smaller shrines of Lord Shiva and Lord Ganesh and afterwards greeted various Congress politicians new and old who had turned up to offer him their good wishes. Former Goa chief minister Ravi Naik as well as Girish Chodankar (president of Goa Pradesh Congress Committee) were to be seen amongst the large retinue of well wishers.
Addressing media people who awaited him at the grand peepal tree courtyard of Mahalakshmi temple, he briefed them a little, saying that if he wins the Panaji by-elections his main agenda would be to tackle unemployment and development first. To a query about whether he could clean up politics, seen as a dirty cesspool by many citizens today, he was clearly flummoxed and at a loss for words and had no clear reply.
The independently- wealthy strongman of Taleigao has called the shots in Taleigao and played his own games of convenience with former chief minister of Goa, Manohar Parrikar, as friend and foe at various times. He has a reputation for whimsical party-hopping and is largely credited for driving the haphazarded concretisation of his own home turf as also Panaji, during his past tenure as Town & Country Planning minister. As also in more recent times in league with Goa Forward chief Vijai Sardesai with whom he recently parted company to re-join the Congress party to fight the Panaji by-elections.
Judging by what he says it is clear Atanasio Monserrate won’t put environmental concerns on the top of his list of priorities when it comes to Panaji’s development as a smart city. It is left to be seen if Ponjekars vote him into power against competition from AAP’s candidate Valmiki Naik, Goa Suraksha Manch’s Subhash Velinger, Utpal Parrikar (who is likely to be officially declared as BJP’s candidate any one of these days) and others who may join the fray at the last minute. Needless to say Ponjekars must vote for the most educated candidate of them all on the subject of urban development without sacrificing environmental concerns.