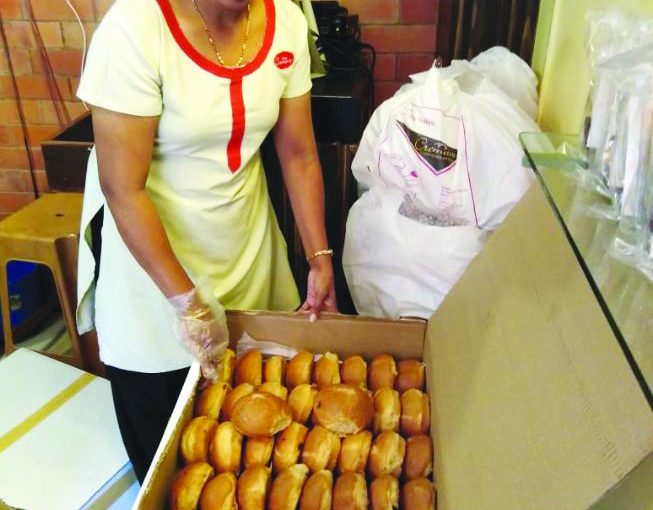 THE SPIRIT OF EASTER IN PANAJI! It was Maundy Thursday of Holy Week and we went in search of hot cross buns at our favourite destination, Cremaux — the original outlet at Panaji market. Here were the best hot cross buns in town and after all these years still selling a generous hot cross bun at `5. Owner Vincent Dias refuses to raise the price and we are grateful to him! Pic shows a friendly Leena doing the honors of opening the first boxes of hot cross buns which had arrived by 11am…some bought by the dozens and yes, you were welcome to buy just one hot cross bun if you wished, no problem. (Pics by Tara Narayan)

I AM referring to Dr Oscar Rebelo’s thoughts vis-à-vis pulpit politics which appeared in some sections of the media. The Church has already apologized for Fr Conceição’s sermon. Dr Rebelo took this opportunity to criticize at the end of his letter AAP leader Elvis Gomes, his fellow Christian, bringing politics into the picture instead of talking more about the sermon.
This has created a rift against AAP in the electorate which might affect the voting trend. I believe that Fr Conceição might have uttered those words without any bad intentions, he had to speak to a known crowd which might not have been able to understand or be well versed in politics.
What Fr Conceição said is not as damaging as statements made by Amit Shah asking Catholics, Muslims and minorities to vacate the country. The BJP has been making several statements earlier on religious and other political aspects but the Church never gave any importance to that.
— Stephen Dias, Dona Paula

NO REGRETS
I don’t regret and never will in my entire life. After the declaration of the last Assembly election results I was so happy when Vijay Sardesai won. I thought now the fighter is in the Assembly to box Parrikar’s ears! I was so happy that, being close to the Holy Spirit Church, I ran and knelt down to thank God.
In no time, the earth below my feet collapsed and I had no words, except “If I had a gun license, I would shoot Vijay Sardesai point blank.” Media brought that in headlines and some even asked me if I regret? Till today, I say the same thing, I don’t regret what I had said.
These days many people ask me if I was so angry then why I am silent now during the Lok Sabha elections? My answer is simple, I don’t have any trust in politicians any more. But of late I’m hearing one name that people say can be trusted. I’m studying the details of the person.
The Congress has lost its senses and so they chose a retired person. Less said the better. BJP MP is as good as any watchman who knows nothing so leave him alone. I know elections are near and time is short. My eyes are watching and ears are hearing about the quality of Elvis Gomes.
I heard he is a family man who has trained his children to be good citizens and good citizens are what we all look for.
— Dr Francisco Colaço, Margao

INDIAN ELECTIONS
It is truly the greatest show on Earth, an ode to a diverse & democratic ethos, where 700 million+ of humanity vote, providing their small part in directing their ancient civilization into the future.
It is no less impressive when done in a neighbourhood which includes de-stabilizing & violent Pakistan, China, and Burma.
It’s challenges are immense, more so probably than anywhere else, particularly in development & fending off terrorism — but considering these challenges & its neighbours, it is even more astounding that the most diverse nation on Earth, with hundreds of languages, all religions & cultures, is not only surviving, but thriving.
The nation where Hinduism, Buddhism, Jainism & Sikhism were born, which is the second largest Muslim nation on Earth; where Christianity has existed for 2000 years; where the oldest Jewish synagogues & Jewish communities have resided since the Romans burnt their 2nd temple; where the Dalai Lama & the Tibetan govt in exile reside; where the Zoroastrians from Persia have thrived since being thrown out of their ancient homeland; where Armenians, Syrians & many others have come to live; where the Paris-based OECD said was the largest economy on Earth for 1500 of the last 2000 years, including the 2nd largest, only 200 years ago; where three Muslim Presidents have been elected, where a Sikh was Prime Minister & the head of the ruling party a Catholic Italian woman, where the past President was also a woman, succeeding a Muslim President who as a rocket scientist is a hero in the nation; where a booming economy is lifting 40 million out of poverty each year & is expected to have the majority of its population in the middle class already, equal to the entire US population, by 2025;
where its optimism & vibrancy is manifested in its movies, arts, economic growth & voting, despite all the incredible challenges & hardships;
where all the great powers are vying for influence, as it itself finds its place in the world.
Where all of this is happening, is India and as greater than 1/10th of humanity gets ready to vote, it is an inspiration to the entire world.
— V Mitchell, New York

LOW TURNOUT
Rahul Gandhi has de-coded the BJP-RSS agenda, latching on Amit Shah’s objectifying of India as ‘sone ki chidiya’!
Very true. Look at BJP ‘gifting Goa’ to their businessmen friends. Adani is ‘gifted’ the Port Trust AND rivers with new bridges to transport his polluting coal at the cost of locals’ health! Mining leases handed to those involved in illegal mining resulting in mining closure. One more casino ‘calmly’ slithers into the Mandovi — all owned by BJP favourites. The relaxation of CRZ rules to just 50 mt of HTL so that his ‘favourites’ can make a killing for a few million rupees — till the beaches are dead and Goa is dead!
Yes, the ‘golden bird’ is being shared amongst BJP cronies and no one can stop them!
Modi promised Goa Special Status in 2014 but failed to deliver. The vitriolic outbursts from BJP/RSS over the Delhi Archbishop’s letter, show why. Goa and its people have a distinct identity/culture different from the rest of India and deserve Special Status to maintain the same. Goa has a significant Christian population. The BJP are afraid this will send a wrong signal that communal harmony is achievable. In fact, they are working to destroy these characteristics of Goans forever.
Here is where all Goans need to think clearly, before all is lost. Do we want Goa to be Goa or UP? You have the power!
— R Fernandes, Margao

WHAT A FALL!
Jet Airways — 20,000 go jobless; BSNL — 54,000 given layout orders, more to follow. HAL cannot pay salaries. Videocon out. ONGC seeing its worse performance. But Modi and Jaitley tell us how the economy boomed under their rule.
— Vivek Tiwari over social media