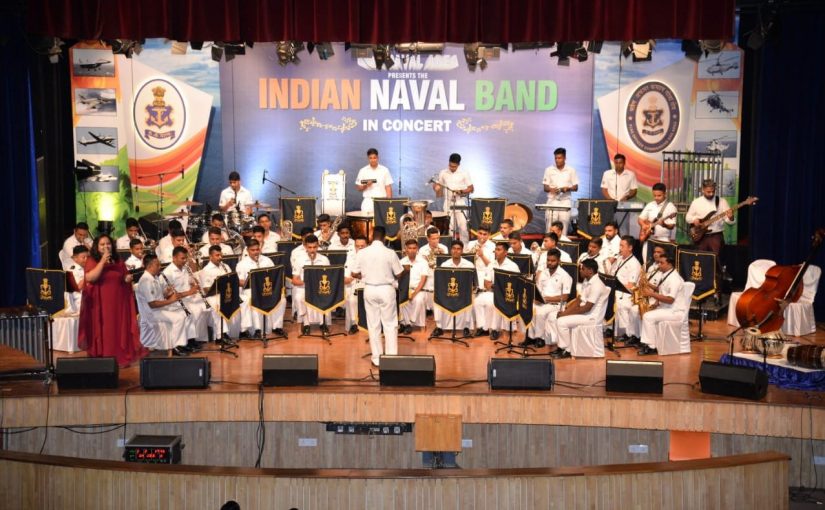 NAVAL BAND DELIGHTING ALL! After the stunning first time rock concert at Tilak Maidan Stadium, the Indian Naval Symphonic Band exhibited another splendid performance on April 25 at Ravindra Bhavan, Vasco. The symphony was conducted by Commander VC D’Cruz, a Goan and an alumnus of Trinity college of Music, London. After starting with a stirring rendition of Vande Mataram, the Naval musicians enthralled the crowd with music from Mozart, Brahms and other famous composers. They later also played famous Hindi and English songs that delighted the audience. Goa’s own Sonia Shirsat mesmerized the crowd with her melodious voice. The band concluded with the patriotic song “Tri Service”

GOA CEO Kunal remarked that the number of faulty EVM’s replaced during the one day Goa Polls was ‘well within the permissible limits’! This is strange. These EVM’s have not been received by the CEO for the first time: they were received and tested. After testing they cannot go faulty. When we purchase electronic items, they may fail at start up due to damages during transportation: why for the EVM’s which should have been tested? Buttons were not working? Not acceptable. Imagine if such was the quality of the satellites being put into orbit?! Or ventilators or other critical medical equipment?
The worst ‘defect’ was the one reported wherein the votes went to a particular candidate even though the other buttons were pressed. If this was so, then where is the sanctity of the EVM’s? Since these are microprocessor based units, the same can be programmed such that after say, 1000 votes, all the remaining, or every 2nd vote or any pre-condition, votes are logged onto one candidate. Has every single EVM been tested with mock drills for 10,000+ combinations of six buttons?
— R Fernandes, Margao

EVM SHAME
The very embarrassed Election commission officials in Goa need to hang their heads in shame due to the glaring faltering of the EVMs and VVPATs at the elections held in the State on April 23. Goa’s Chief Electoral Officer Kunal was responsible for ensuring that a system would be in place that allowed people to exercise their most precious right of all, the right to vote in a free and fair election, free of fraud and intimidation. In the world’s largest democracy, with a technological edge superior to many other countries, the EC has not lived up to Mr. Kunal’s bragging for over a month that meticulous steps had been taken to ensure that the EVMs and the election process would be flawless.
On the contrary, many EVMs and VVPATSs were found to be faulty, maliciously defaulting votes only to the BJP regardless of the individual vote cast and had to be replaced. Hundreds of frustrated and angry people went home having been denied their right to vote despite giving up their precious time to do so.
It is dismaying that despite crores of tax payers’ money being spent on this election, the people’s faith in the election process has been shaken beyond repair. The judiciary needed to step in and order a probe as to how those EVMs and VVPATs faulted bringing utter disgrace to the election process.
It is no secret that under Narendra Modi, the Independence and sanctity of the EC has been compromised. If the EVM’s are not 100% secure, we should return to the ballot paper like all major democracies around the world.
It is well known that EVMs can be manipulated, hacked or malfunction for technical reasons. Elections in a democracy are meaningless and a futile process unless they are fair and absolutely transparent reflecting the wishes of the people.
Organising free and fair elections is sacrosanct and more important than the result itself. If the reports are true that the flaws with the EVM machines were defaulting the votes to the BJP regardless of the choice made, then the results announced on the 23 May will be of questionable legitimacy and people will be understandably aggrieved that they may have been denied or robbed of their right and desired outcome!.
— Aires Rodrigues, Ribandar

BJP’S OWN TERRORIST
India’s self-styled “Nationalist” political party namely BJP in particular has been deliberately promoting, giving shelter even for some of the most rabid known communal hate-spreading religious Monks / Babas / Sadhus / Gurus / Sadhvis and other controversial leaders tickets to contest elections to finally give top positions (not just in some states but even at the centre) despite of having a number of criminal cases pending against them in different police stations/courts of our country to carry forward its most destructive hidden agenda and turning them into national heroes overnight for its own political gains.
Now, after successfully turning known controversial religious leaders like Yogi Adityanath, Sakshi Maharaj etc into major national heroes, if not famous poster boys, the BJP leaders have now recently recruited Sadhvi Pragya Thakur (an accused in the 2008 Malegaon bomb blast who is still facing trial in court and who recently has got bail on medical grounds) and have already appointed her as their party candidate from Bhopal.
The said Sadhvi Pragya after joining the BJP now knows for sure that she will definitely be acquitted of all charges sooner or later and due to which is already seen trying to fool everyone playing the victim card by mischievously blaming an upright daring Anti-Terrorist Squad (Mumbai) officer, the late Hemant Karkare (who died whilst facing bullets in the 26/11 Mumbai terror attack and whose family was later rightly bestowed with the highest award for his daring act) of torturing her in police custody and for falsely trying to implicate her in the 2008 Malegaon bomb blast under some political pressure.
She has even gone to make one of the funniest statement of all time to toe the BJP line by openly saying that cow dung and gau-mutra (cow’s urine) cures cancer like a big qualified doctor.
What message is the BJP trying to convey to the world by appointing such type of insane self-styled religious heads/leaders as its brand-ambassadors and whose head is full of nothing but only of “Gobaar” or cow-shit?
— Jerry Fernandes, Saligao
IPSCDL should prioritise
tHE Imagine Panaji Smart City Development Limited needs to prioritise the urgent works that are fundamentally required to be done so as to act as a base for the Smart City Mission.
Important among these works are: Cleaning and deepening of the drainage system in a scientific manner. A very comprehensive way to tackle this issue is to calculate at say heavy downpour the amount of water that collects and then deepen the drains proportionately so that no accumulation of water does not takes place. The Indian Meteorological Department can be referred so that say at four inches of rainfall per day, the amount of water on the entire surface area of Panaji city can be accurately known based on the total surface area of the city. This will definitely prove to be a very scientific way of tackling the issue.
Also the depth of drains has to be determined on every street so that at the level of draining into the Mandovi, at high tide, back flushing does not prevent draining from occurring. Slabs covering the drains should allow draining properly and just before monsoons, all the drains should be at least cleaned to prevent flooding.
The next basic step would be the repair of all the roads. Demarcation of parking places along the road should be painted in white, as also zebra crossings. Streamlining of traffic is another issue that needs immediate attention by taking appropriate measures.
The cleaning of the St. Inez creek should be taken up on a priority basis so as to reduce the accumulated sewage in the creek. During the rainy season, dilution of the amount of sewage, will make the task easier. Also relocation of the people who do not have pucca houses should be done so that amount of sewage is greatly reduced. So far only half-hearted attempts have been made to clean the St. Inez creek. A garbage treatment plant on the lines of the Saligao garbage treatment plant should be set up in a suitable location to cater to the garbage generated in the city. The installation of the Smart cameras or CCTV at the 59 locations short listed can be deferred as this is not such an urgent issue and the Rs 181 crore allocated for this purpose can the used for more fundamental urgent works.
— Elvidio Miranda, Panaji