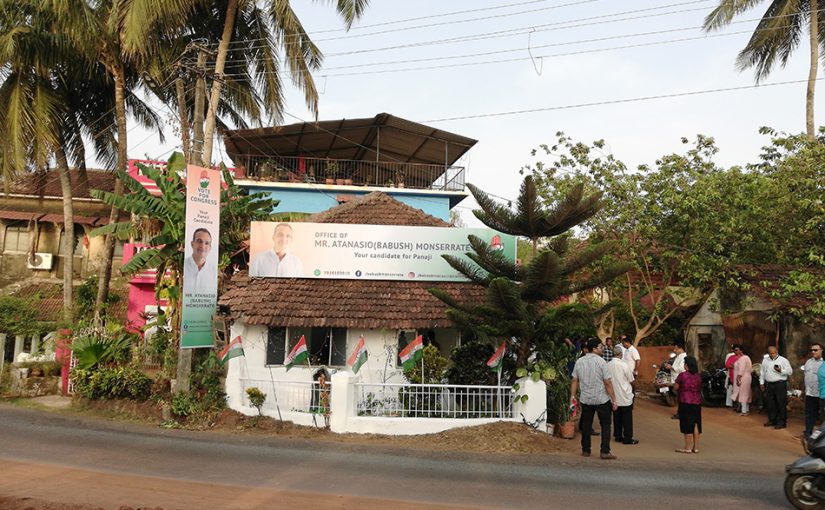 AMBUSH: Babush seems to be set to oust the BJP from Ribandar which has traditionally supported the saffron brigade. Ribandar is the most neglected part of the Panjim constituency which has been a BJP fiefdom for 20+ years

With the BJP vote divided between former RSS chief Subhash Velingkar and the official BJP candidate, Sidharth Kuncalienker, Congress candidate Babush Monserrate has the best chance of capturing the Panjim seat. He has the advantage of getting the Congress vote of around 5,000 besides his own votes of about the same quantity. In the last election Babush lost by a narrow margin of less than 1,000 votes but this time there is no Parrikar to campaign for the BJP candidate. Since Panjim has been neglected for over two decades, voters may favour Babush who has not only promised to move the casinos from the Mandovi river (which other candidates have also promised) but more importantly find jobs for the youth in Panjim

Panjim is the capital city of Goa. It had the good fortune of being represented in the Legislative Assembly by the late Chief Minister Manohar Parrikar.
Ponjekars naturally expected Manohar Parrikar to give priority to solving the problems faced by the citizens. On the contrary, despite all the talk of Parrikar’s great legacy, the condition of Panjim has continued to worsen during the last two decades that Manohar Parrikar has been the chief minister. Though it was during the tenure of Manohar Parrikar that the door-to-door segregated collection of garbage started, there is still no landfill or waste treatment plant. It’s a disgrace that garbage that is collected is dumped even on the Campal parade ground.
During the last 20 years the old Panjim, which I came to first in 1979, has disappeared. On the surface the new Panjim might look more impressive with brand new high rise buildings. But the ground reality is that the expansion of Panjim has taken place without any concern for available infrastructure. Normally a good city should have a lot of open spaces because open spaces are the lungs of any urban area. The sleepy Panjim of the ‘70s has no doubt become a bustling commercial hub. But without water and power, and roads are constantly being dug up for one reason or other. The location of IFFI in Panjim has only added to the chaos. It came at the cost of the destruction of the oldest stadium in Goa, the Dayanand Bandodkar football stadium, where the Bandodkar Football Championship was held.
What Panjim has inherited after two decades of Parrikar raj is a stinking pot-holed, congested, noisy, degraded city. A city which has been taken over by migrants with slum colonies springing up not only along the banks of the St Inez nullah but even in upmarket Altinho. The hard reality is that the bold and beautiful and the rich and the powerful cannot survive without the services of drivers and, most importantly, maids living in the slums.
The situation has worsened because of the relocation of the bold and the beautiful from other parts of the country and the rest of Goa to Panjim which has made it grow vertically.

And the casinos of course have killed the Mandovi river — the lifeline of the city that gave it its unique charm and atmosphere as you entered the city along Dayanand Bandodkar road.
Tomorrow, May 19, 2019, Panjim will once again have an election to select a replacement for Manohar Parrikar in the Legislative Assembly.
It is not for us to suggest whom you should vote for. But we can and will look at the track record of the various candidates contesting for the honour of becoming the Panjim MLA. We will look at what kind of promises they have made in their manifestos. And most importantly which of the candidates is best equipped or most likely to live up to the promises they have made in their manifestos.

VELINGKAR VS THE BJP

The battle primarily seems to be between Goa Suraksha Manch candidate Subhash Velingkar and Congress candidate Babush Monserrate. This is because most Ponjekars see Subhash Velingkar more than Sidharth Kuncalienker as the inheritor of the legacy of Manohar Parrikar.
The Saraswat Brahmins who were the core of Manohar Parrikar’s supporters will chose Velingkar over Sidharth. It is not a coincidence that Velingkar has been targeting Sidharth even claiming that the CM Pramod Sawant and Sidharth together looted the Goa Infrastructure Development Corporation (GIDC).
Velingkar has called the ‘Smart City’ that Sidharth heads, a most dumb idea because of the manner in which it was executed.
The BJP manifesto does not inspire much confidence as the party has miserably failed to fulfil the needs and the expectations of the people of the capital city.
Velingkar exudes confidence, while even the BJP leaders and workers do not seems to be supporting the candidature of Sidharth.

AAP candidate Valmiki Naik is accepted as an honest, sincere candidate. He is the first candidate to swear an affidavit that if elected he will not jump to the BJP for the sake of power.
The affidavit is significant as several Congress as well as MGP MLAs have defected to the BJP since the last elections and Goan MLAs as a whole have a poor track record of party loyalty.
AAP has done a very good job in Delhi in the fields of education, health care and the in providing basic requirements like water supply and power. Their ‘mohalla clinics’ have proved to be extremely successful at providing health care at the grassroots level.
Unfortunately, the halo around AAP, witnessed during the 2017 elections, is no longer visible. Many of the middle and upper middle class supporters of AAP, like Dr Oscar Rebello, seem to be disheartened or disillusioned with AAP. Elvis Gomes has perhaps not proved to be very effective at rallying his troops.
Valmiki is from Panjim but critics say he has been away for a long time in the US. Even if Valmiki wins, people are questioning whether he can deliver on his promises. An independent MLA who is the only representative of his party, may not get the support of the government in implementing his aspirations for the city.

Of all the manifestos released by various candidates, the longest is that of Congress candidate Babush Monserrate. Babush has done another U-turn and swears that he will stick to his original resolution of getting the casinos out of the Mandovi river within 100 days of getting elected.
Babush has also promised to clean up the St Inez creek. Babush will not scrap the smart city project but make sure that the CCP which he controls will monitor smart city projects for the inclusive development of Panjim.
Interestingly, Babush is the only candidate who has committed himself to creating job opportunities for unemployed youth in the capital city. The capital city, being the commercial hub and housing the head offices of both government and private organisations, can and does provide a lot of job opportunities. Unfortunately, the majority of jobs in the capital city go to migrants. It might be relevant to note that Babush has been contributing to the empowerment of youth.
It is a matter of record that he has been paying school and college fees of many boys and girls from impoverished families. Babush, contrary to the image being projected by the BJP, has a particularly soft heart for the girl child. Babush has announced in his manifesto that he would be implementing his own ladli laxmi scheme under which every girl child would be given `1 lakh. This is in addition to the one lakh the girl child is entitled to the under the Ladli Laxmi Scheme.
Panjim needs someone dynamic. Panjim needs someone with the will power to implement what he or she promised. Panjim needs someone who is anxious to prove himself. It has always been the dream of Babush that he should represent the capital city.
Unlike the other candidates Babush has the personal support of a dozen Congress MLAs. The Congress party itself has 5,000 odd supporters in Panjim city. In every election in the last two decades the Congress candidate has got at least 5,000 votes. Babush on his own has a vote bank of another 5,000 votes if not more. Since Babush is contesting on the Congress ticket he can probably expect a minimum of 10,000 votes of the 20,000 registered voters in the Panjim constituency. Even if we assume that the turn out is 80%, the BJP votes will be split between Velingkar and Sidharth. AAP is unlikely to cross its margin of the last election. Which is why we believe that Babush is most likely to be the next MLA from Panjim.

If Babush wins there may be a change in the government. Babush’s greatest achievement seems to be uniting the Congress party. If Babush wins the Congress can and will (with Girish as the president of the GPCC) make an attempt to topple the BJP government. Babush has the personal support of at least six MLAs and has a good equation with Vijai Sardesai. It was Vijai Sardesai who brought Babush into the BJP coalition and made him the vice president. Since the BJP induced the split in the MGP Vijai seems to have lost his confidence in the BJP. In any case his loyalty was to Parrikar and not to the BJP. Hence, no matter what happens at the Centre, the victory of Babush might motivate the Congress to topple the BJP government in the State.