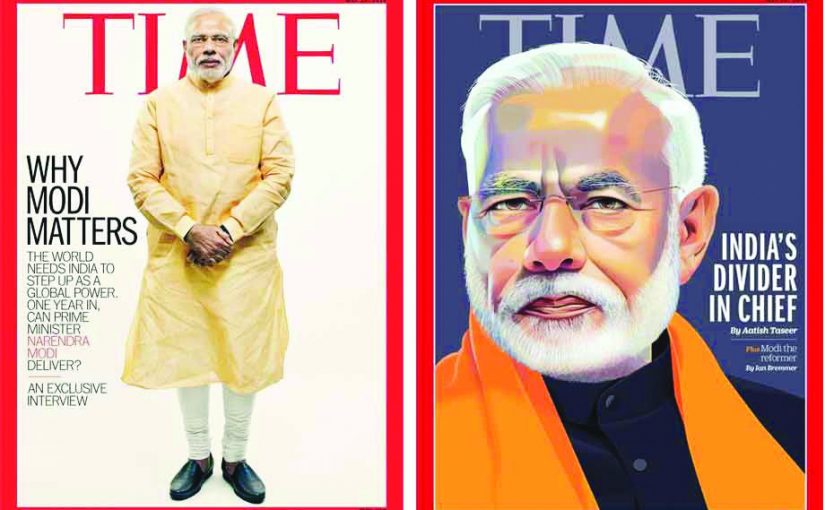 CHANGING PERCEPTIONS: The BJP should introspect on why and how the narrative on Prime Minister Modi has dramatically changed in the international media, from then-US president Barack Obama praising Modi in a TIME article in 2015 to the ‘divider in chief’ cover in 2019

The internationally reputed Time magazine has put Modi on the front page of its global editions, labelling him India’s Divider-in-Chief. Interestingly, the author who has accused Modi of polarizing the country on caste and communal lines is the son of Indian journalist Tavleen Singh, a staunch supporter of Narendra Modi. The article also takes a critical look at the disastrous economic reforms like demonetisation and GST

The article, written by novelist Aatish Taseer, wondered if India would be able to ‘endure another five years of a Modi government’.
The Time magazine cover story has been written by novelist Aatish Taseer, according to whom “hope is off the menu” in the 2019 Lok Sabha elections. | TIME
The Time magazine has described Prime Minister Narendra Modi as India’s “divider in chief” on the cover of its May 20 issue. Modi’s picture was on all international issues of the magazine except the United States edition.
The cover story, written by novelist Aatish Taseer, has the headline: “Can the world’s largest democracy endure another five years of a Modi government?” A second article, by Ian Bremmer, treats Modi far more positively, suggesting that Modi is “India’s best hope” for economic reform.
The magazine had placed Narendra Modi on its cover in 2015 too, with the title “Why Modi Matters”. It had also carried an interview with the prime minister.

Taseer starts his article saying that in 2014, India became the “first of the great democracies to fall to populism”. According to him, Modi won those elections riding on hope but this time “whatever else might be said…hope is off the menu”.
The article says that Modi’s ascension in 2014 showed that “beneath the surface of what the elite had believed was a liberal syncretic culture, India was indeed a cauldron of religious nationalism, anti-Muslim sentiment and deep-seated caste bigotry”.
Taseer describes Modi’s record on women’s issues as “spotty”. He also criticises the appointment of Rashtriya Swayamsevak Sangh ideologue S Gurumurthy to the board of the Reserve Bank of India, and calls Uttar Pradesh Chief Minister Adityanath a “hate-mongering priest in robes of saffron”. Taseer describes the candidature of Malegaon blasts accused Pragya Singh Thakur in the Lok Sabha election from Bhopal as an example of “the spectre of extreme nationalism and criminality” becoming inseparable.
“As India votes this month, the irony of those words is not lost on anyone,” the novelist says about Modi’s slogan “Sabka Saath Sabka Vikas”.
“Not only has Modi’s economic miracle failed to materialise, he has also helped create an atmosphere of poisonous religious nationalism in India…,” he adds. “Basic norms and civility have been so completely vitiated that Modi can no longer control the direction of the violence.”

‘Modi the person most likely to deliver’

In another article, political scientist Ian Bremmer acknowledges that Modi can be blamed for “fanning flames of hostility” toward Muslims, but says, “India still needs change, and Modi remains the person most likely to deliver.”
Bremmer cites improved relations with China, the United States and Japan, but also mentions the prime minister’s development agenda domestically that has “done the most to improve the lives and prospects of hundreds of millions of people”.
According to Bremmer, the Goods and Services Tax streamlined a complex tax system and “unprecedented amounts of money” went towards infrastructure under Modi’s regime. He also praises the role of Aadhaar in reducing fraud, the Ujjwala scheme and the healthcare insurance scheme.
Modi also benefits from a lack of a credible alternative, Bremmer writes. “Modi has the instinct to dominate and the thin skin of other strongmen, but he also has a genuine track record in providing the kind of reform that developing India urgently needs,” he adds.