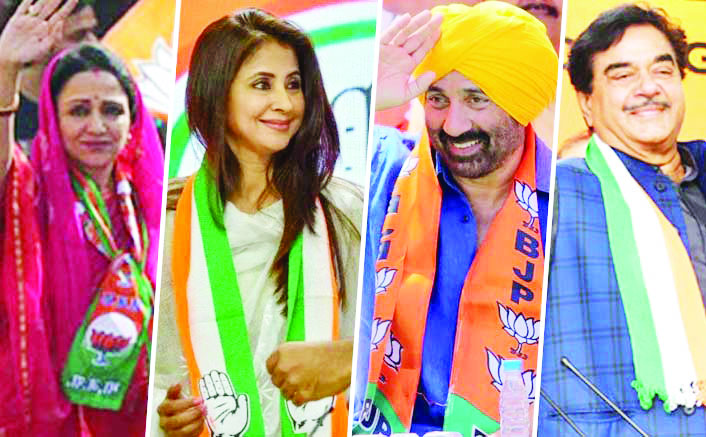 This time it is not about the silver screen but about real-time performance in the political turf as many popular celebrities have made their debut in Lok Sabha Elections 2019. While Bollywood Celebrities like Sunny Deol from BJP performed excellently from his constituency Gurdaspur (Punjab), Gautam Gambhir from BJP also played his first innings from East Delhi with a higher run-rate. Meanwhile, major setback were for the first time contestant Urmila Matondkar of Congress Party as she lost from Mumbai North (Maharashtra) constituency against Gopal Shetty of BJP Party.
Let’s take a deeper look at how a few celebrity contestants from various constituencies performed in the General Elections 2019:

Sunny Deol
Sunny Deol from BJP has made his entry in politics like a hero and gave a tough fight to Sunil Jakhar of Congress Party. Sunny Deol won the Gurdaspur seat by a huge margin. Now, that is some performance by Sunny Deol who is contesting for the first time against the experienced politician, Mr. Jakhar.

Prakash RAJ
The much talked about actor, Prakash Raj too found it difficult and lost the seat to PC Mohan from BJP who won the Bangalore Central (Karnataka) seat by a big margin.

Poonam Sinha
Poonam Sinha’s first time entry to politics was not all good as Mrs. Sinha of SP lost by heavy margin from the Lucknow (Uttar Pradesh) Seat. Meanwhile, it was Rajnath Singh who won the Lucknow seat without ease.
Urmila Matondkar
All is not good for the Bollywood actress, Urmail Matondkar who was contesting for the first time. The actress of Congress party lost by a heavy margin in Mumbai North (Maharashtra) constituency against Gopal Shetty of BJP Party.
Meanwhile, other celebrities like Hema Malini of BJP won by whopping number of votes in Mathura and have a tough fight to Kunwar Narendra Singh of RLD. While, Kirron Kher from BJP also won from Chandigarh Constituency.

Actor-turned-politician Sunny Deol is one of the stars fielded by the BJP in this election, and his star power has paid off. Deol, who is making his political debut, has cornered over 54% of the votes polled in the Gurdaspur constituency so far. Then again, he is the third member of his family to enter politics, after his father Dharmendra and Hema Malini. Punjab Congress chief Sunil Jakhar, meanwhile, trails with 40. 24% vote share. Jakhar had won the seat in the 2017 by-polls, which was necessitated after the death of Vinod Khanna in April that year.

Deol, popular for his role in patriotic films like “Border”, had played up the BJP’s poll agenda of national security Iin the campaigning phase. He was also seen wooing the voters by holding aloft a handpump, recreating a scene from his hit film “Gadar: Ek Prem Katha”, and at other times he mouthing popular dialogues from his films such as “Dhai kilo ka hath” and “Hindustan zindabad hai, zindabad rahega”. In fact, earlier this month, Jakhar had accused him of having no understating of Punjab issues, going so far as to say “politics is a serious business and not a time pass activity”, but the voters clearly feel differently.
Gurdaspur is one of the few constituencies in the state where the BJP has a lead. In most of the other seats, the Congress is currently leading. As per the India Today-Axis My India post-poll survey, Congress is likely to win 8-9 seats in Punjab, while the BJP alliance will be able to gain 3-5 seats. The Shiromani Akali Dal (SAD) is a major partner for the BJP.
Punjab was among the last states to vote in the Lok Sabha elections in the seventh and last phase on May 19. The state sends 13 Members of Parliament to the Lok Sabha. Polling for all the seats took place on May 19 and the voter turnout came close to 66%, albeit lower than the 2014 Lok Sabha elections.
The 2019 poll outcome will also decide whether the SAD, which had faced a backlash over the desecration issue, will be able to make up for the lost ground. In the 2017 Assembly polls, the SAD was relegated to the third spot, bagging just 15 seats of the 117 assembly segments. In the 2014 Lok Sabha polls, while the SAD-BJP combine had won six seats, AAP and the Congress had bagged four and three seats, respectively.