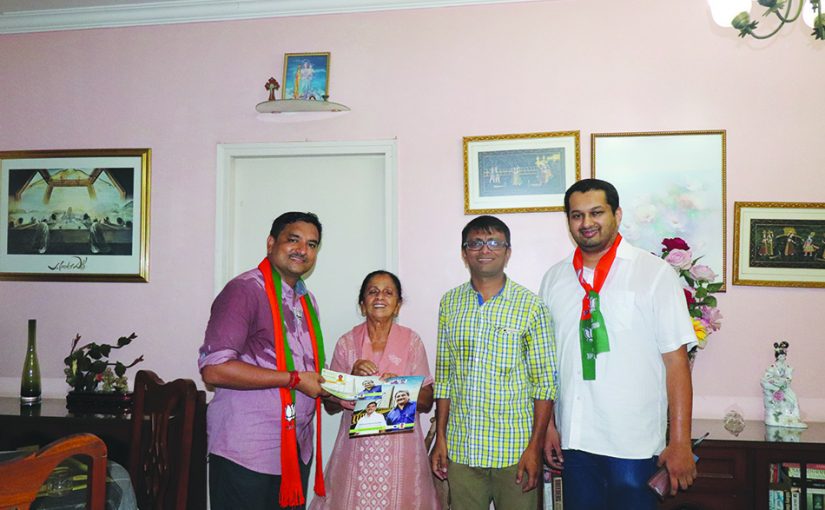 COLLUDING TO FLOUT ALL RULES

CAMPAIGNING: Utpal Parrikar joined BJP candidate Sidharth Kuncalienkar as he campaigned in Milroc colony, Ribandar earlier this week. A goodwill gesture that comes at a good time for Kuncalienkar and the BJP who are facing the elections without the presence of Manohar Parrikar for the first time in almost three decades

Just thought I’d place a few facts about the new Terminal Building coming up at the Captain of Ports (CoP) Jetty on information I received from the CoP Office and other authorities under the Right to Information Act for information of the Citizens of Goa and particularly those from Panjim.
Initially, the Jetty was renovated and the purpose of building the same was “to act as an interface for foreign going vessels at Panaji Port for crew changes, supply of bunkers etc“. Whether its being used for this purpose or not is a big question. This Jetty was built within PTS 7 Chalta No. 2 of Panjim City Survey.
Now, we have a new Terminal bulding Ground + 3 coming up at the same Jetty. The objective of the Terminal building is “to integrate the canopy/control room and the jetty, to control the access for boarding of vessels by ship/shore personnel and to maintain strict check at this point.” The issue here is whether or not permissions are required for the building by the CoP.
Well, the CoP is of the opinion that as per the Indian Ports Act 1908 Chapter II Sr. No. 3, any development in the water body comes under the purview of the Captain of Ports, and only NOC for sewerage, electricity and water supply will be required.
The question is whether this area comes in the water or on land under Panjim City Survey.
As per the minutes of meeting held in the Chief Secretary’s Office, it is shockingly noted that the area where the building is to come up does not bear any survey number. Incidentally when the Jetty was being built the Survey Plan was produced with the land bearing PTS 7 Chalta No. 2 (part).
However, the GCZMA clears the Project citing the Survey number i.e. PTS 7 of Chalta No. 2 (Part) provided all permissions are obtained from the other Authorities. The GSPCB is of the opinion that the “activity” for construction of Terminal Building does not come within the purview of the Water Act and Air Act. Hence the Board cannot issue any NOC for such purpose. They however asked the COP to ensure that the said activity does not result in any kind of environmental pollution.
As per the NGPDA, since the Project is fully in water and there is ’no reference’ to Chalta Number and PTS number by the Captain of Ports, it has no jurisdiction in the area. It appears that the NGPDA cannot read its own Development Plan as this area is clearly indicated in the Outline Development Plan of Panjim (ODP). Moreover the area comes within the Conservation zone clearly indicated in the ODP. However the NGPDA choses to ignore its Conservation Committee.
Incidentally it is interesting to note that the NGPDA did forward the file during the time of construction of the Jetty for approval from the Conservation Committee attaching therewith the survey plan and property card. The height of this building which comes under the Conservation (Commercial) area is 14.00 mts.
The CoP then writes to the CCP that since the construction is in the water body it comes under the purview of the CoP and therefore NOC would be required only in future for water, sewage etc. Conveniently, the CCP agrees and requests the CoP to approach them after completion of the building.
Is Panjim city being administered by the authorities who are obliged to do so or is it only ruled by commercial vested interests? This is worrying indeed and the reason that Panjim has deteriorated to this extent, and it can only get worse as there appears to be no rule of law!
— Patricia Pinto, ex-Councillor, CCP

A NEW LOW!
THE BJP has set a new low in politics: Promise all that the people want and more and coolly renegade. They are the current holders of Masters of U-turns certificate!
The local Goan inhabitants want their culture and land to be preserved. For Panaji to regain its past glory of cleanest city in Asia. Sustainable tourism/commercial activities, no overcrowding or monstrous buildings. Water, a clean Mandovi, and wells and taps. IT industry jobs for locals. No acquiring land from locals or communidades. No IItians required!
The crooked casino lobby comprises notorious north Indians born with a bribing spoon. This is a fact. They want exclusive use of the Mandovi to do as they please. They do not want local employees. They want roads alongside jetties and to construct huge concrete buildings to house their offices, etc. They are quite happy encroaching public roads, cluttering up pavements and open spaces.
They have the backing of Central BJP and other political parties too. They want to build multi-storeyed buildings beyond what the law stipulates to accommodate their non-Goan staff and they will pay anyone for their protection. They will ensure scarce water and power first reaches their staff and pay for the same.
There have been many early morning two-wheeler accidents by casino staff driving rashly! And non-Goan traders view every open space as “dancing moneybags!” Take the politician. They will do anything for vote banks. Remember the Trojan horse, Goa Forward?
All over Goa, water is becoming scarce. The Mahadei controversy is unsettled and local BJP is treated as a non-entity by Central BJP bosses. Water is the key to life but alas our politicians have favoured builders, hoteliers, mine lease owners, industrialists to flout primary water laws — and wells are drilled far, far down so that the water table has vanished or is varnishing rapidly. None of the political manifestoes speak about this. AAP says a bit but not about banning the drilling of wells and protecting traditional wells.
Elections means once a person is elected he/she is king for five years. You can cry yourself hoarse later. The GF is a living example. No one is signing any affidavits that post-elections they won’t hop over to winning party — except AAP candidate! There must be some accountability of promises made in manifestoes but not fulfilled ….along with a time frame.
If casinos are not removed from river Mandovi within 100 days, then what will happen? Strangest is the promise of `1 lakh to every girl child! What is this if not part of vote bank scheme? Can a citizens committee come up to hold politicians responsible and accountable? Can we make all politicians sign an affidavit?
— R Fernandes, Margao

AUDIT SMART CITY WORKS
Amidst allegations of a credible nature of corruption in Smart City works, it would be pertinent for high-level auditing to be conducted. The money being used is the money of hard working tax payers, who pay taxes and as such accountability at the highest level has to be apportioned.
Social media has brought to light huge corruption in the installation of 223 electrical poles with fixtures on the Atal Setu bridge. The amount estimated is very high and auditing of the entire expenses relating to the Mandovi bridge should be thoroughly investigated and strict action should be taken by the Anti Corruption Bureau for irregularities. It would not be wrong to state that huge money made by the accused could be used to finance poll expenses as well as line the pockets of those indulging in corruption.
Voters should reflect and cast their vote for a non-corrupt candidate!
— Elvidio Miranda, Panaji

FOOD FOR THOUGHT
AAP sees the no-holds-barred attacks against each other by the BJP and Congress as mere shadow boxing – because in fact the two parties enjoy a good relationship!
AAP convenor Elvis Gomes said issues such as the alleged rape are raked up only during elections to divert attention from all round failures of the government vis-à-vis basic issues like ODF and water scarcity. Even Panaji is not free from open defecation.
He added that Panaji is facing water scarcity, along with other areas in Goa and the BJP and Congress (that have ruled over Goa for decades) are shamelessly asking for votes again without giving account of their failures. National games are not visible as a subject of discussion anywhere and there is no indication about who will pay the `10 crore fine.
— Pradeep Padgaonkar, AAP, Goa

KUNCALIENKER MUST COME CLEAN!
The BJP top brass made it a high profile issue to pressurize the Panjim Congress candidate to reveal his criminal antecedents. Now a noted advocate and activist says he has concrete evidence that the BJP Panjim candidate has purchased 260 acres (1,040,000 square mtrs) of land at Dodamarg in Sindhudurg district costing a whopping `7 crore which I doubt he has included as his immovable assets in his affidavit during his nomination. The BJP Panaji candidate should come clean on this allegation or else take responsibility and agree that he failed to file a complete affidavit revealing all the value of all his immovable assets.
Where did the ex-Panaji MLA make all this money from? It is known that he is the Vice-Chairman of the GSIDC which could have been the source of alleged kickbacks. Will the BJP Panaji candidate have the moral rectitude to own responsibility for this sin of omission on his affidavit?
— Stephen Dias, Dona Paula