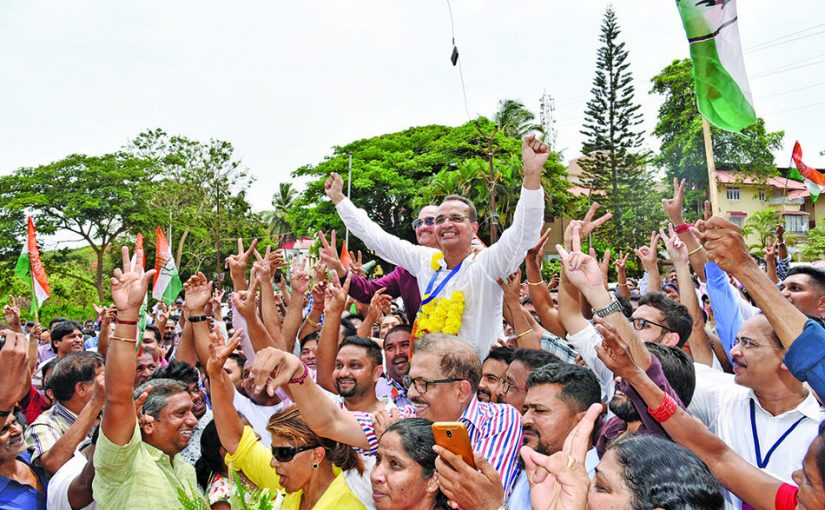 VICTORY: A triumphant Babush Monserrate takes out a victory rally after proving that the Parrikar magic no longer works in the capital city Panjim. Babush won the Panjim seat, which was held by the BJP for 25 years, by a margin of about 1,750 votes

The body language of the candidates said it all. While Babush looked extremely confident and relaxed, his main opponent Sidharth looked disheartened if not defeated. Sidharth’s wife Sonia would have made a better candidate.

Atanasio (Babush) Monserrate, as expected, has knocked out Sidharth Kuncalienker of the BJP. The Parrikar factor did not play a part as Ponjekar’s are finally giving vent to their ire over the state of Panjim city.

During a debate on Prudent Media for the first time one of the poor families had the guts to openly say that Parrikar made no contribution to Panjim city. GSM candidate Subhash Velingkar also pointed out that the BJP manifesto has remained the same since 1994. The St Inez nullah has been not been cleaned. There is no garbage management and Parrikar sabotaged the working of the CCP controlled by Babush by appointing a commissioner who would not obey the mayor.
Ponjekar’s voted for change and hopefully Babush will deliver on his promises to the residents of Panjim.

However, Babush may not realize his hopes of forming a Congress government. This is because the Congress has not been able to win the other three seats where by-elections were held; namely Mapusa, Mandrem and Shiroda. The BJP has retained the Mapusa seats with Joshua, son of the late Francis D’Souza, emerging victorious in a ding dong battle. Congress defector Shubhash Shirodkar also succeeded in defeating MGP president Deepak Dhavalikar by a narrow margin, ending 76 votes ahead.

But more importantly even if the Congress had won the three other bye-election it is unlikely that Vijai Sardesai would be incline to extend his support to his good friend Babush whom he had made the vice president of the Goa Forward. Vijai is unlikely to take the risk of extending support to Babush to topple the BJP government considering the massive victory of Modi and company. The GF moreover is a formal member of the NDA floated by the BJP.