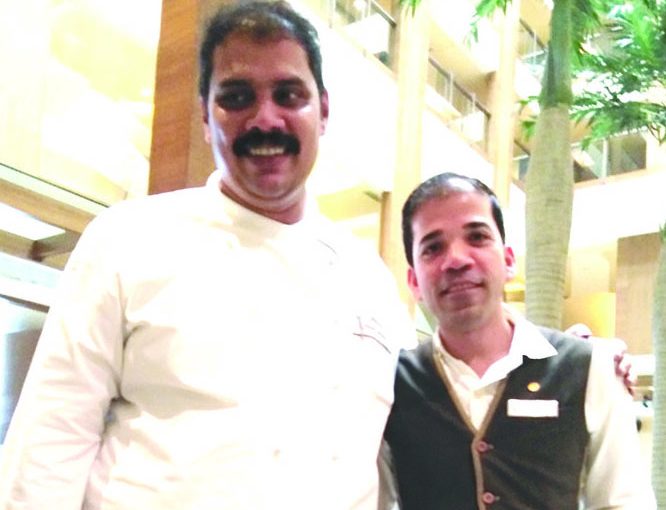 THEY are celebrating Kerala at Taj Vivanta’s Latitude these days courtesy newly arrived Executive Chef Jose Thomas. Step in and below a canopy of fragrant marigolds be welcomed with red gulal tikka and the gift of a string of jasmine! It was purely by fluke that I found myself there Sunday noon. A dear friend had gone to the barber’s down the street where we live and our streets being of the injurious variety, he tripped over a rocky stretch, fell on his knees, got some horrible bruises and cuts.
Back at home I said, look let’s go up to your favourite Menezes hospital where they’re celebrating your old pal, founder of the CMM business house Pascoal Menezes’ 100th something birth anniversary — this way we’ll get your bruises professionally dressed and better to take a tetanus shot too. Maybe Cesar and Mimi Menezes will be there and we can say hello to them too.
All that over with and a little more cheered up it was too late to go home because I hadn’t made any lunch. We stepped by at the Taj Vivanta for a bite. And that’s how I discovered they were celebrating Kerala with a unique Malabar coastal cuisine festival with a menu to make any Kerala food lover’s palate rejoice.
It must be new executive Chef Jose Thomas’ idea. He is most gregarious, forthcoming, and enlightened me that Kerala is not just pure Onam sadya vegetarian cooking like most folk think! Cuisines in Kerala feature three styles — northern Kerala Manglorean styled curries as also Muslim Malabari and Syrian Christian favourites. So naturally Chef Jose Thomas’ menu features such non-vegetarian pièce de résistance stuff as Konkan mutton curry (a south Kanara speciality), Mutton Eshtew, Kori Gassi , Kozhi Malliperlan, and seafood favorites Crab Curry (featuring fresh mud crabs), Crab Milagu Fry, Tiger Prawns Roast, Scampi Tawa Fry, Kane Kaidina, Meen Polllichathu, Squids Sukkha, Mangalorean fish curry (seer fish cooked in bedgi chilli ground curry), Allapuzha Meen Curry, Meen Moily (featuring Kerala’s riverine and lake fish), etc.
Not being such a hardcore Mallu, my eyes only fell on the appam and neer dosa (translates to “water dosa” and as French pancake thin as you can make them) which made my heart flip flop. It is hard to find either of them made exquisitely and of course there is toddy available in Goa but Chef Jose Thomas must first discover Goa to find out where to source it from. Mercifully, the menu also lists choice vegetarian fare including my all-time favourite avial. As far as I am concerned if there’s so much vegetarian going why go crazy over non-vegetarian (unless it is a fish curry!).
ANYWAY I ordered appam and neer dosa with both avial and vegetable stew (a Syrian Christian invention I think and the veggie versions can be terrible) – the avial as you must know is a medley of veggies (drumstick, various gourds, yams, long beans, some folk add French beans and carrots — all steam cooked and blended into a thickish, coconut gravy, absolutely to live for. The curry is flavourful with curry leaves and veggie flavours…I do think some of the most welcome summer time food to relish and stay happy is appam-avial (in Tamil Nadu they pair Kerala’s avial with the Tamil savoury pepper-dotted rice-roasted moong dal ven pongal, also a superlative combo)…curries are mopped up with appam, neer dosa or kori roti if on the menu. Basket full of various fried papad of urad dal, sago and rice flour came along — all Kerala crunchies, said Chef Jose Thomas.
He has seen life and experienced food during stints in Bangalore and of all places Gujarat, but refused to comment about Gujarati food except that “it’s a different type of mostly vegetarian eating”….and yes, he knows that there will be a lot of demand for his Kerala cuisine in Goa because there is a large Mallu community. They are currently only doing an a la carte menu — so mix and match and order whatever one is pining for home away from home state, something like that.

Vegetarian eaters have a choice selection too. There’s an appealing Urullakkizhangu Roast of tender baby potatoes in Malabari masala, also appealing are the Kaaju Kotmir Vade, Chattambade (deep fried savoury patties of ground Bengal gram), Oggaraneda Aritha Pundi (steamed rice dumplings flavoured with coconut and cumin) and so on…pair with plain rice or “neichoru” (golden desi ghee-laced hot rice), can order unpolished red rice too or puliogare (spicy tamarind rice), there’s Malabar paratha, appam/idiappam/neer dosa…except that I think five-star pricing being five-star pricing must offer at least a pair of appam/neer dosa accompanying any of the main dish orders. After all appam/neer dosa are such lightweight affairs that they varnish in three or four scoop-full bites! 125 per solo appam/neer dosa is not acceptable, in fact very khadoos if I may say so. Still hungry? Generally I studiously avoid looking at desserts but invariably someone will ask solicitously — you have a choice of Elaneer Payasam (coconut pudding), Ada Pradhaman (rice flakes cooked in coconut milk), Ela Ada (rice parcels redolent of banana-jaggery stuffing), Banana Caramel Ice-Cream. Enjoy. I’m thinking it’s been such a long time since I’ve been to Kerala…how come none of the 5-stars offer traditional south Indian filtered coffee (sweetened with coffee jaggery) with their south Indian foodie festivals? THESE days I’ve discovered two agreeably great down market places to drop by for a bit in the evening: There’s this absolutely small-time Vimal Shawarma place (somewhere near Zarina Towers, St Inez, down the lane where the Syrian Christian cemetery is) — to drink the most divine tandoor matka tea or coffee. Hey, here are more than a dozen varieties of tandoor teas listed,20 per ceramic brown matkena, but I’ll swear it’s the only tea worth drinking in town.
After paying one’s respects at a funeral or cremation it’s best to end up here to cheer up over a tandoor matka tea! Morning hours you may also get a tempting combo of Maharashtrian country favourites kande-pohe, and a little later closer to lunch time find pithla-bhakri (40) or zunaka-bhakri (50). Jowari and nachne bhakri being millet Indian breads are an excellent option if you’re shunning geu bhakri or roti! Once I found a whole gang of medical types relishing the tandoor tea here …somebody’s already raved about the tandoor chai in Panaji over Facebook. Apparently, there’s another outlet out at Mapusa.
The other place? I’ll keep that for next week, stay in touch!