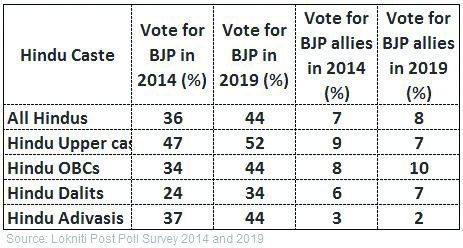 It would not be an overstatement to say that the 2019 Lok Sabha election verdict and the sheer scale of the National Democratic Alliace’s victory is in large measure a manifestation of the deepening religious divide in Indian society.

Lokniti’s post-poll survey data clearly find that the BJP’s all-time high vote share of 37.4% has come mostly on the back of an unprecedented Hindu consolidation around the party as only a small proportion of religious minorities supported the BJP. In 2014, 36% of all Hindu voters were found to have supported the BJP. This time the number increased to 44%. The NDA got 51% votes among Hindus. In the face of such a massive consolidation of the majority community that comprises four-fifths of the country’s population, the Opposition parties stood no chance at all.
Table 1: Support for BJP rose across all Hindu castes and communities

The BJP was able to secure this enormous Hindu support on account of the backing it received from all Hindu castes and communities, including Dalits and Adivasis, when compared to 2014. Support from Dalits went up by 10 percentage points; among Adivasis, it went up by seven percentage points. In a sense, the unification of Hindu communities in the 2014 election not only persisted but strengthened further this time.

Table 2: Support for NDA declined among minorities
If the Hindus were on one side, the minorities were clearly on the other, indicating a deeply polarised verdict. Only 8% of Muslim voters nationally ended up voting for the BJP, the same as last time. Christians and Sikhs too largely kept away from the BJP. Among Christians, 11% voted for the party. Among Sikhs, the number was the same (the Akali Dal, the BJP’s ally, got 20%). This lack of enthusiasm for the BJP among the minority communities is also evident in the party not being able to perform too well in minority-concentrated States like Kerala, Punjab and Goa.

The polarisation of voters on Hindu-Muslim lines seems to have taken place in many States, according to our survey. It was found to be most acute in States where the proportion of Muslims is high, namely, Assam, Uttar Pradesh, West Bengal and Bihar. Not only did the BJP get a massive proportion of Hindu votes in these States, this share was much larger than what it received in the 2014 election. Increased Hindu support for the BJP in these States (and elsewhere too) ended up rendering Muslim consolidation behind the Congress and other Opposition parties ineffective again.
In Assam, the NDA got over two-thirds of Hindu votes compared to three-fifths last time. Consolidation of Muslims in favour of the Congress in some seats went up from two-fifths to two-thirds. In Bihar, Hindu support for the NDA increased by 21 percentage points, whereas consolidation of Muslims in favour of the RJD-Congress alliance went up by 9 percentage points. In West Bengal, the BJP’s vote share among Hindus went up by 36 percentage points, whereas the consolidation of Muslims in favour of the Trinamool Congress increased by 30 percentage points. In Uttar Pradesh, the NDA got 60% of Hindu votes, while Muslim support for the mahagathbandhan was 73%.
In the Lokniti survey, the NDA got 45% of the Hindu votes in sampled seats where Muslims are less than 10% of the population, and 59% of the Hindu votes in seats where Muslims are between 20% and 40% of the population.
Table 3: Hindus on one side; Muslims, Christians and Sikhs on the other

Divided in responses too

The religious divide in these elections could be seen in not just how people voted, but also in how they responded to several survey questions. For instance, on being asked if the government should return to power, over half the Hindus answered in the affirmative, while two-thirds of Muslims and over half the Christians and Sikhs replied in the negative. On the question of Rafale, a plurality of Hindu respondents who had heard of the controversy felt there had been no wrongdoing by the government, but a majority of Muslims, Christians and Sikh respondents felt otherwise. Similarly, while most Hindus credited either the government or both the government and the Indian Air Force (IAF) for the Balakot strikes, a majority of Muslims, Christians and Sikhs credited the IAF alone.
Table 4: Hindus three times more likely to feel close to BJP than Congress
Like or dislike for a party