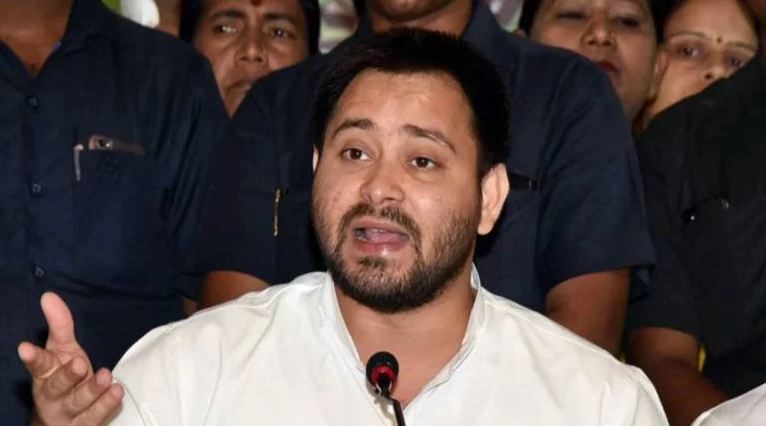 COMPLETE FAILURE: The RJD, this time led by Lalu Prasad’s younger son Tejashwi Yadav (in pic), recorded its worst performance in Bihar’s Parliamentary elections, being reduced to zero in the Lok Sabha elections 2019. Analysts say the party’s campaign was completely focused on verbal bashing and public criticism of the Central and state governments, with no roadmap for development. The BJP also smartly capitalised on Hindutva mobilisation by RSS-BJP-backed fringe groups that polarised several areas in the State

The alliance between the Bahujan Samaj Party and Samajwadi Party managed to prevent a clean sweep by the BJP. If the Congress had joined the alliance maybe the BJP numbers would have been even lower

TURNING caste calculations on its head, and upending the formidable arithmetic of the Mandal formula’s main protagonists in Uttar Pradesh and Bihar, the BJP-led NDA has virtually flattened the politics of identity by winning 103 of the 120 Lok Sabha seats in the two states.
The BJP’s surge in the Hindi heartland pushed to the wayside the biggest political realignment of Muslim-Yadav-Dalit-Jat communities attempted by the SP-BSP-RLD alliance in UP, and the rainbow coalition of Muslim-Yadav-Mushahar-Koeri-Nishad groups put together by the RJD-led initiative in Bihar.

Ek bhi vote na ghatne paye, ek bhi vote na batne paye (Not a single vote should go waste, not a single vote should be split), was the war cry that was sounded at the first joint campaign rally of the BSP-SP-RLD in Deoband on April 7, just five days before the first phase.
This slogan summed up the coalition’s ambitions, but also exposed the limitations of such a formulation in a politically crucial state. It was a call for the mutual transfer of votes among their core support base but it was also seen as a veiled suggestion to other communities that they were not needed in this arithmetic.
Meri ginti nahin hogi na usmein (I will not be counted among them), was the theme pushed by the core supporters of SP and BSP over the last couple of decades, since the advent of Mandal politics, to justify voting against non-social justice parties. This time, however, the gathbandhan’s slogan virtually signalled to other communities that they would not be counted.
This left the field open for the BJP to consolidate non-Yadav and non-Jatav votes behind it. These communities had shifted to the BJP in droves during the 2014 Lok Sabha elections and stuck with the party during the 2017 assembly elections. Until as late as the 2012 assembly elections, many of these communities used to vote for the SP or BSP.
The results, in essence, reflect how identity-based arithmetic fell flat against the chemistry of BJP. While the BJP increased its vote share from 42.63% (2014) to 49.55%, the combined BSP-SP-RLD vote share slipped from 42.98% (2014) to 38.92%. That the gathbandhan didn’t cause much of a dent is obvious from the final NDA tally of 64, including two alliance partners, as against 73 in 2014.

In Bihar, too, the politics of identity was a key factor as recent as in the 2015 assembly elections, when the Opposition RJD tied up with the JD(U) to defeat the BJP. This time, after the JD(U) switched sides to join hands with the BJP, the Opposition sought to replicate the model with other parties.
The RJD weaned away the BJP’s partners Upendra Kushwaha (RLSP) and Jitan Ram Manjhi (HAM) and added Mukesh Sahni (VIP) to forge a rainbow coalition that drew its core support from the Muslim-Yadav-Keori-Mushahars-Nishad combination, along with the Congress.
This tie-up, however, fell flat against the NDA’s BJP-JDU-LJP alliance that rode the popularity of Prime Minister Narendra Modi. The alliance together polled about 53.25% votes, winning every seat except one in the state.
The results also appear to have called the bluff of politically organised peasant communities across UP, Bihar, Haryana, Gujarat and Maharashtra. These communities Yadavs (UP and Bihar), Jats (Haryana), Patidars (Gujarat) and Marathas (Maharashtra) had taken a dominant position in state politics until this setback.
While the Yadavs experimented with coalitions, the Jats, Patidars and Marathas have staged violent agitations against the BJP governments in these states since 2014. Their demands for quotas in jobs and educational institutions were seen as attempts to further consolidate the politics of identity.
While the BJP tried to pander to these demands at the administrative level, the results suggest that other communities have not displayed much sympathy. This time, the association of dominant communities with Opposition parties appears to have isolated them politically.