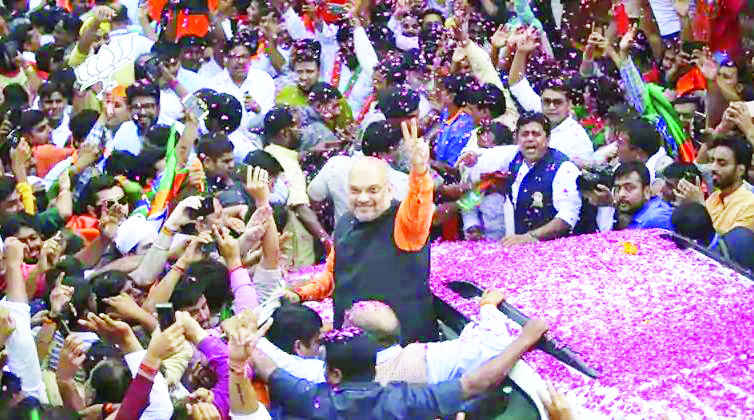 CHANAKYA: In 2014, not many knew the real Amit Shah. However since then he has emerged as a modern-day Chanakya, someone who has unveiled his own version of the political treatise Arthashastra. It was his mastery in both strategy and the dirty tricks department that resulted in the massive victory of the BJP

PM Narendra Modi may be the face of the BJP but the back room genius is Amit Shah. It was Shah who meticulously campaigned and managed to even get a large number of seats in Rajasthan and MP where the Congress had won the Assembly elections. Even the Bengal tigers could not keep out Amit Shah

After the BJP’s stunning victory in 2014, many compared Amit Shah to the late BJP leader Pramod Mahajan, who was known for his strategising skills. But someone who knew Shah from his early years in politics said, “Pramod could be indulgent while dealing with a request for a seat from someone he loved or respected, even if he knew he would not be able to win it. But with Shah, it’s impossible to make him oblige if he is not sure you can win that seat.”
In 2014, not many knew the real Shah. What Indian politics has witnessed thereafter is a man who has often been called the modern-age Chanakya, someone who has unveiled his own version of the political treatise Arthashastra. By now, no one in the BJP seems to have any doubt about Shah. His determination to accomplish anything he sets his mind on, his meticulous planning and the ruthlessness with which he takes on political rivals have made him the most successful party chief.
From stitching up new social coalitions to choosing the right leaders for election management to keeping out senior leaders from the election fray – Shah’s is arguably the last word in organisational matters.
Reviving party

Soon after the BJP came to power, Shah set aside the first year – 2014-15 – to “revitalise” the party. On November 1, six months after the BJP won a clear majority in the Lok Sabha, Shah launched his party’s membership drive with the slogan ‘Saath Aaye, Desh Banaye (Come together, build the nation)’.
By July, the membership, registered through a simple process of missed calls, rose from 3.5 crore to 11 crore. Shah then launched the Maha Sampark Abhiyan or the mass contact programme to familiarise new members with the organisation and its ideology.
He then kicked off ‘Mera Booth Sabse Mazboot’, another campaign to take the party ideology to the booth level. Next, he launched Deendayal Upadhyaya Vistarak Yojana from Naxalbari in West Bengal, setting off on a 95-day all-India tour to strategise on ways to win the 2019 Lok Sabha election with a clear focus on 120 seats where the party had lost in the last election. “The BJP’s booth-level management is superhuman. No other party has the management ability of the BJP,” said a party general secretary.
The effect of Shah’s plan to expand the party was first on display in Tripura, where the party overthrew the decades-old Communist government. As early as September 2016, Shah had started a contingency plan for the 2019 elections – in case the party failed to retain the seats it won in 2014. For that, he planned to zoom in on states where the party had not made deep inroads, including southern and eastern states. A core committee meeting chaired by Shah had identified around 115 seats as the party’s “new catchment area”. In these seats, across Odisha, West Bengal, Andhra Pradesh, Telangana, Tamil Nadu, Kerala and the Northeast, general secretaries and other office bearers were given charge.
He brought about changes within the party too. Shah dismantled existing cells within the party and carved out 19 new departments. Besides, Shah identified 10 focus areas — among them, setting up of district-wise party offices, office modernisation, setting up of libraries, the membership campaign and government schemes such as Namami Ganga and Swachh Bharat.

When it comes to choosing people to do the job, nothing comes in Shah’s way except the candidate’s ability to accomplish the mission. “There’s no lobby in the BJP. If Shah is convinced that you can do the job, you are in,” said the leader.
He had picked Sunil Bansal, a low-profile organisation person who had worked in Rajasthan and Delhi, to oversee the implementation of his blueprint for the Uttar Pradesh mission ahead of 2014. He chose P Muralidhar Rao, a general secretary who was working with Swadeshi Jagaran Manch before he came into the BJP, for the training programme. What impressed Shah about Rao was his ideological background and his ability to spread the party ideology among the cadre.

Call-centres, GPS-fitted raths, video and hologram addresses, and tracking of booths and volunteers — the BJP’s campaign over the last five years has been infused with technology. For the 2019 election, the party had 168 call centres with 12,662 karyakartas who would contact people on telephone or through social media. Shah has incorporated high-tech designers and consultants in his team.

Ahead of the election, efforts were made to track beneficiaries of welfare schemes initiated by the Central government and mobilise them as the party’s core support base.