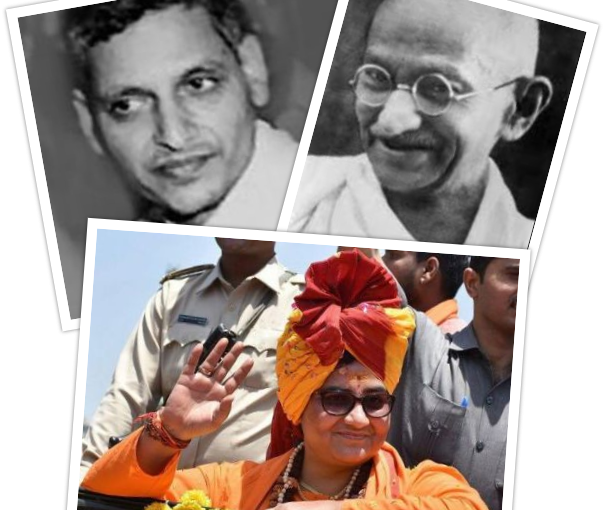 SACRILEGE: ‘Swami’ Pragya Thakur, accused in the Malegaon Hindu terror case, who is now BJP MP from Bhopal, has praised Naturam Godse (top left) the murderer of Mahatma Gandhi, calling him a patriot

It does not come as a surprise that Pragya Thakur of Hindu terror fame has called Godse, the murderer of Mahatma Gandhi, a patriot. Here we take a look at Nathuram Godse and the forces that made him who is was

To fathom Nathuram Godse’s patriotism and love for India, we must delve into aspects of his personal history. It is important to comprehend the psychology of a boy who was named Ramachandra Godse but who came to be known as Nathuram. Before he was born, in a small village of the Bombay-Pune belt, his parents had three sons, all of whom died in infancy. To ensure death did not claim Ramachandra as well, they brought him up as a girl, had his nose pierced, and made him wear the nose ring or nath until they had yet another son. It was because of the nose ring he wore that Ramachandra became Nathuram.
Godse may have defied the jinx of death haunting his family, but the role of girl he was made to play must have bred in him immense confusion and a complex about his sexuality. In a fascinating psychoanalysis of Godse, political psychologist Ashis Nandy in his book, At The Edge of Psychology, wrote, “Perhaps it was given in the situation that Nathuram would try to regain the lost clarity of his sexual role by becoming a model of masculinity.”
This was, as Nandy showed in his book, most likely the source from which sprang his opposition to the Gandhian ideas of pacifism and nonviolence. Unable to vanquish the ideas which Godse thought were emasculating the Hindus and turning them effeminate, he killed the man who propagated them.

In a way, Godse’s confusion about his sexuality was mingled with his extreme religiosity as well as anxiety about his own social status. It is possible his parents inculcated in him the feeling of being the chosen one – after all, he, unlike their other three sons, had defied death. Godse became a devotee of the family gods, would go into trance, and play the role of an oracle, or became the medium through which the gods spoke to the family. It must have reinforced his sense of being special to gods.
Yet this uniqueness his life did not seem to affirm. The Godses were Chitpavan Brahmins, a social group that had once enjoyed social prestige and ascendancy, but had become anxious about its status because of the gradual transformation of the country’s socio-economic milieu. This was both because of the modernising influence of the British rule and the Congress’s attempts to give a mass base to the anti-colonial struggle, thus making it imperative for its leaders to rope in social groups on the margin. The rigid social hierarchy, and privileges flowing from it, stood undermined, generating anxieties among the traditional elite.
This anxiety Godse personally experienced in his early life. At the age of 16, he opened a cloth shop – for a Brahmin to enter business was a marker of downward social mobility. Worse, his cloth shop failed and he took to tailoring, deemed to be a lower caste profession. There was thus an enormous gap between Godse belonging to the traditional elite group of India and his actual socio-economic status. “It is from this kind of background that the cadres of violent, extremist and revivalist political groups often come,” wrote Nandy.

Godse joined the Rashtriya Swayamsevak Sangh, left it because he did not find it militant enough and entered the Hindu Mahasabha. He started a newspaper, Hindu Rashtra, which argued against and opposed Gandhi because he was perceived to be emasculating Hindus, turning them effeminate. By contrast, the militant traditions of urban middle-class Bengal, Punjab and Maharashtra impressed him immensely.
Gandhi and Godse represented two contrasting ideas of politics and religion. For Godse, politics was about harnessing power to drive fear into opponents, to inflict manifold losses on them through means legitimate or illegitimate. He neither interrogated nor redefined the extant notions of power and their functions. Instead, his idea of power mimicked that of the British, employing force to defeat the rulers, to give them a taste of their own medicine, so to speak.
For Gandhi, though, politics was not so much about defeating the British as it was about transforming the rulers, about making the colonial ruler realise the sheer immorality of the power they exercised. It was not about the end justifying the means. Then again, Gandhi did not perceive Hindus as a religious group, in the way followers of Semitic religions are, but a people spread over a land who believed in an open-ended system that forever incorporated new elements or reinterpreted the existing or old ones. There was no one book, no one way of praying, no one body of rituals.
By contrast, Godse’s idea of religion resembled that of Semitic faiths. Erroneously believing that the unity, organising capacity and missionary zeal of Muslims and Christians had enabled them to conquer India, he wanted Hindus to become a rigidly closed religious group as the followers of those religions were. However, the problem of caste had to be overcome to achieve this unity. Godse sought this by participating in programmes such as inter-dining. His second method of uniting Hindus was to identify and define the other, the Christians and Muslims, by subjugating them for the pain and torment their ancestors were supposed to have inflicted on the Hindus. In other words, Godse’s anxieties were to be expressed and overcome in the political-religious realm.

In assassinating Gandhi, Nathuram gave his otherwise ordinary life a new meaning. This was perhaps the reason why he pleaded with the government not to show him mercy and send him to the gallows. His masculinity had been asserted. He had sacrificed himself for promoting the idea of militant Hinduism. He had killed the man who was sacrilegiously turning Hindus effeminate.
Godse acquired esteem through the assassination of Gandhi. His new-age followers can find their esteem by turning militant, by vanquishing Muslims and Christians in the 21st century, or by converting them and bringing them back into the Hindu fold, in the hope of effacing these religions from the country. It will then turn India akin to a modern European nation-state – one country, one religion – which is the model a large segment of the Hindu Right favours. Godse’s brand of assertive, militant Hinduism finds an echo in such slogans as “Garv se kaho hum Hindu hain” ‒ say with pride that we are Hindu.
Undoubtedly, Godse was a misguided patriot, fired by a warped love for the “motherland”. This is as true of his new-age followers. His love, as also that of his followers, is destructively obsessive. They can neither accept competing ideas in the religious realm nor the free choice of the other. It was this illegitimate passion of Godse which inspired him to kill Gandhi. It is this which usually inspires myriad outfits worldwide to hitch religion to the creed of violence.