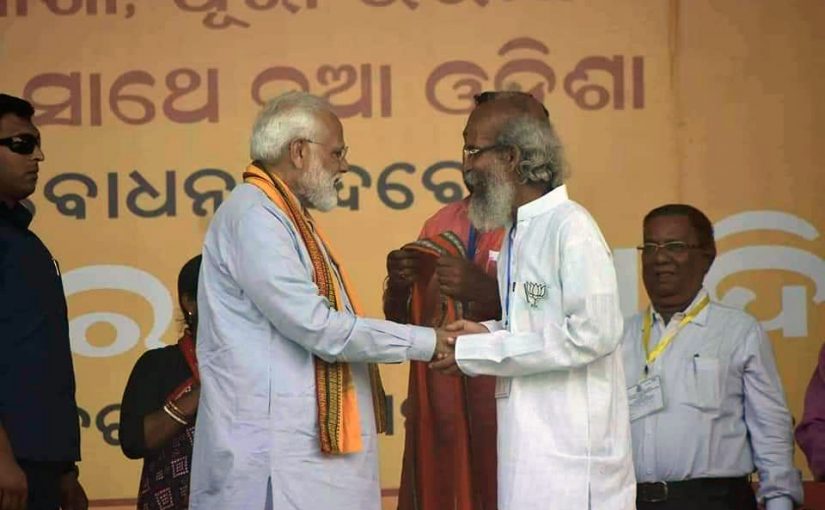 BRUTAL: Australian missionary Graham Staines, who set up a leprosy hospital in a remote part of Orissa, was burnt alive along with his two sons, Philip (aged 10) and Timothy (aged 7), allegedly by Bajrang Dal activists headed by Sarangi

The then leader of the Bajrang Dal, Pratap Sarangi, who was implicated in the murder of Australian missionary Graham Staines over a decade ago, is now a member of the Modi Cabinet

When Prime Minister Narendra Modi and his Cabinet took the oath of secrecy at a decked-up Rashtrapati Bhavan on 30 May, thunderous applause greeted a frail-looking, unkempt Pratap Sarangi, as he emerged from obscurity to recognition and perhaps adulation.
Recognition, by his party, for defeating two of the richest candidates in the recent Lok Sabha polls from Odisha’s Balasore. Adulation, on social media, for leading his life as a plain-spoken austere political activist, a bachelor, earning him the moniker ‘Odisha’s Modi’.
Sarangi, a first-time MP, was sworn-in as a Minister of State (MoS) in the new Modi Cabinet, earning him his second moment in the sun. The first came when a photograph of the austerely-clad man — seen packing a simple bag in his bamboo hut before leaving for the oath ceremony in Delhi —went viral on Twitter.
He will take charge as MoS in the Ministry of Micro, Small and Medium Enterprises (MSME) and the Ministry of Animal Husbandry, Dairying and Fisheries.
But there is more to the social media star’s remarkable rise than meets the eye. A chequered past, from his Bajrang Dal days, betrays his hardliner, pro-Hindutva origins.

Sarangi, a long-time member of the BJP’s ideological fountainhead RSS, was the state convener of the right-wing group Bajrang Dal, when a mob allegedly led by its members had brutally murdered Australian Christian missionary Graham Staines and his two minor children in 1999.
However, during the course of the investigation, a man with links to the right-wing group, Dara Singh, and 12 others were convicted, in 2003.
Singh was sentenced to death by a lower court but the Orissa High Court commuted the sentence to life imprisonment two years later.
Odisha-based senior journalist Sandeep Sahu, who had interviewed Sarangi soon after the incident, told The Quint that while Sarangi had condemned the deaths of the two minors in the attack, he had refrained from condemning Singh, for killing Staines.
“He stood by his strong views on the ‘evil plot’ of the Christian missionaries to ‘convert the entire country’. During an interaction soon after Staines’ killing, he had spoken passionately, at length, about the need to stop the missionaries,” Sahu said.
Sarangi was also arrested after an attack on the Odisha Assembly by right-wing groups in 2002, including the Bajrang Dal.
He currently faces as many as seven criminal cases, including charges of rioting, arson, assault and damaging government property for the attack on the Assembly — as per his election affidavit.
Speaking to NDTV, Sarangi dismissed the charges and firmly denied any link to the Staines case.
“All these (cases) are based on false allegations. The police have done this deliberately because I went against their corruption and taking bribes. I fought against it seriously,” Sarangi said.
“I fought against injustice for social causes and that is why I was the enemy of many corrupt officials and that is why all antisocial elements united to file cases against me. Many charges were proved false in court and rest will be dismissed too,” he added.

Yet his image, both as a leader and as a person, is overwhelmingly that of an ascetic. “His extremist ideology is often overlooked because of his simplistic lifestyle. He is widely seen as an ideal politician – one who has renounced the materialistic… which is also true. He is known for frequently meeting his constituents and can often be seen cycling from village to village to meet voters. He even cycles to and from the state Assembly in Bhubaneswar,” Sahu added.
Sarangi’s supporters hail him for his extensive social work. Hindus approve of him for his dedication to protect cows. While many on social media hold him as an example for other politicians.
The first-time parliamentarian is also known to spend a major portion of his MLA pension to support education of poor children in his area.

Sarangi, a two-time independent MLA from Nilgiri in Odisha, had contested as the BJP’s candidate from Balasore and turned out to be the giant killer in the recent Lok Sabha elections, as he emerged victorious against two of the richest candidates of Odisha.
Sarangi, a provocative orator, defeated sitting BJD’s MP Rabindra Kumar Jena, an industrialist and Congress candidate Nabajyoti Patnaik, son of Odisha Congress chief Niranjan Patnaik.
Sarangi got 4.83 lakh votes against Jena’s 4.70 lakh votes. He won comfortably by a margin of 12,000 votes. Sarangi had contested unsuccessfully as the BJP candidate in 2014 Lok Sabha polls as the BJP candidate. He had lost the polls against Jena by a margin of 1.42 lakh votes.
Jena is the proprietor of a news channel named News World Odisha, who had earlier also served as CEO, then as managing director of Balasore Alloys. Jena got the backing of Odisha Chief Minister Naveen Patnaik during his electoral battle.
However, banking on Modi’s wave and his own goodwill, Sarangi won the race, leaving Jena stunned, who was largely believed to be invincible from the Balasore parliamentary constituency.
Modi had also campaigned for Sarangi in Balasore.
During campaigning, Sarangi campaigned in a hired auto-rickshaw while his opponents used luxury vehicles for campaigning.