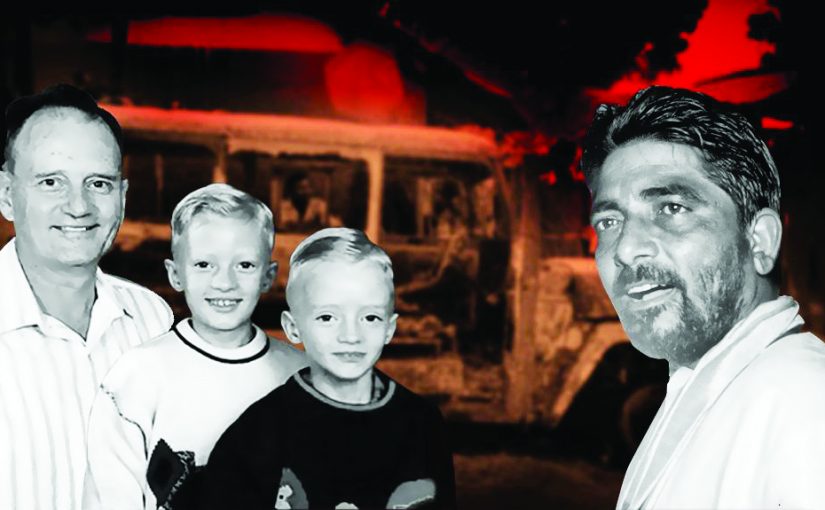 REWARDED: Despite being implicated in the brutal murders of Graham Staines and his young sons, RSS hardliner Pratap Chandra Sarangi has been appointed Union Cabinet Minister in the new Modi government

The then leader of the Bajrang Dal, Pratap Sarangi, who was implicated in the murder of Australian missionary Graham Staines over a decade ago, is now a member of the Modi Cabinet

Manoharpur is a small village in Keonjhar district in Odisha.
In the intervening night of 22 January and 23 January 1999, Manoharpur hit newspaper headlines when Graham Staines, a 58-year-old Australian Christian missionary, was burnt to death along with his two sons — 10-year-old Phillips and 7-year-old Timothy. Staines and his sons were sleeping in their station wagon in front of a church in the village, when the car was attacked by a mob.
The mob was led by Dara Singh, a local leader with alleged links to Bajrang Dal. It was a landmark moment in India, revealing fissures in its secular history and uncovering a narrative of ugly violence against Christians in India.

Who Was Graham Staines?

Graham Staines was a Christian missionary who worked with leprosy patients in Mayurbhanj district in Odisha for nearly 30 years. He had come to India from Australia in 1965 and had never left the country. The family had opened a leprosy home in Baripada and his work among adivasis and lepers was well-known. News of his death caused distraught to those who knew him in Baripada, according to India Today.
“It’s as if we all have had a personal bereavement,” said District Collector R Balakrishnan. For the past 35 years, dressed in casuals, sporting his trademark hat and wheeling his rickety bicycle, Saibo – as he was popularly called – was a fixture in Baripada where he did “God’s work”, tending and nursing leprosy patients in a specially-run home on the town’s outskirts.

Why Was He Murdered?

On the night of the murders, Staines had gone to Manoharpur village for a festival. Dara Singh claimed that Staines was involved in forced conversions of adivasis. On the night of 22 January 1999, Singh got some followers together and went to Manoharpur village. Angered by Singh, the mob poured petrol on their car and set it on fire. Reportedly, Staines and his sons tried to escape, but was prevented doing so by the mob.
KR Narayan, the then-President, condemned the incident in harshest of words. He said Staines’ murder was “A monumental aberration of time-tested tolerance and harmony. The killings belong to the world’s inventory of black deeds.”
LK Advani, the then home minister despatched a three-member cabinet team to Manoharpur and announced a judicial inquiry headed by a Supreme Court judge DP Wadhwa. The case was handed to the CBI for investigation.
However, in the aftermath of the incident, Gladys Staines, wife of Graham Staines, had repeatedly stated that her husband was not involved in forced conversion of adivasis and lepers.

Why Was Staines’ Murder Significant?

Attacks on Christians in India
Graham Staines’ murder was significant as it came on the heels of a list of violent crimes against Christians. Reportedly on February 24, 1999, the then-home minister LK Advani stated that there were 116 communal-based crimes against Christians in 1998. Churches were also destroyed in the Dangs in Gujarat in 1998. So, Staines’ murder brought violence against Christians in a sharp relief, causing widespread outrage in India.
Even now, when incidents of attacks on Christians rise and periodically made headlines, Staines’ murder is referenced with respect to its brutality and the anger it generated.
Passing of Juvenile Justice Bill 2000
Another implication of the Staines’ murder was the passing of the Juvenile Justice Bill 2000. The law was debated and passed after 13-year-old Chenchu Hansda, an accused in the Graham Staines’ murder, was sentenced to life term. He was the first to be arrested for the crime and was seen by witnesses at the spot of the crime. When the Odisha High Court acquitted 11 accused in the case, a fresh appeal was made against Hansda’s sentence, reports Scroll.in.
What Did the Wadhwa Commission Find?

The Wadhwa Commission, led by Justice DP Wadhwa, was constituted with two objectives. One was to investigate the facts and the circumstances of Staines’ and his sons’ murders. Two, to determine the role, if any, played by authority, organisation or individual in connection with the murder.
The Commission held Dara Singh to be guilty of Graham Staines’ murder, but dismissed allegations that he was affiliated to the Bajrang Dal. This was a controversial decision as it has been written in the aftermath of the Commission’s report that there was plenty of evidence linking Singh to Bajrang Dal.
Dara Singh was a known criminal in the district, with reportedly nine police cases registered against him at the time of Staines’ murder.
After the Wadhwa Commission report, the National Minorities Commission inquired into the Staines’ murders and highlighted Dara Singh’s linkage with Bajrang Dal.

What Punishment Was Given to Dara Singh?

In 2003, a trail court in Khurda convicted all 13 accused. Dara Singh was awarded death sentence, while others were given life imprisonment.
In May 2005, the Orissa High Court commuted to life imprisonment the death penalty imposed by the sessions court on Dara Singh on the grounds that it couldn’t be considered as the ‘rarest of rare’ case.
Dara Singh then appealed against his life sentence in the Supreme Court, but his appeal was dismissed and the SC Bench confirmed the High Court judgement in 2011.

Where is Gladys Staines and Her Family?

Gladys Staines continued to stay in Odisha with her daughter Esther. In 2003, she told the media that she has forgiven the killers of her husband and two sons. According to a report in The Hindu, she said:
“I have forgiven the killers and have no bitterness because forgiveness brings healing and our land needs healing from hatred and violence.”
In 2005, she was awarded the Padma Shri by the President of India for her work with people suffering from leprosy.