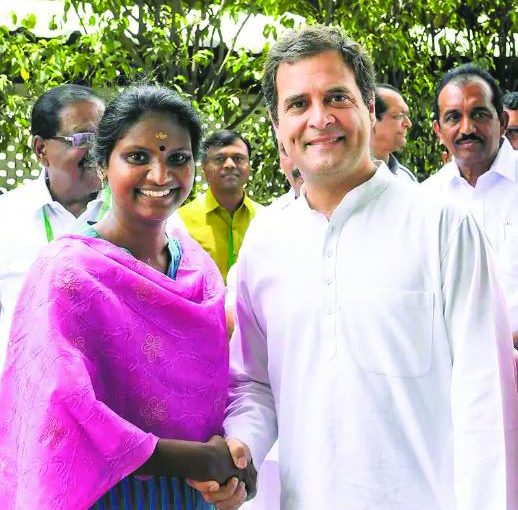 For the first time a large number of newly elected MPs are below 40. What is even more satisfying is that a large number of young women have been elected. Even in the Union Cabinet there are two women with one of them Nirmala Seeta Rawan getting the prestigious home portfolio. The youngest of the MPs is just 25.

Barely anyone in Alathur, the constituency that falls in Kerala’s Palakkad district, had heard of Ramya Haridas until her name featured on television news scrolls as the Congress candidate. Now, as the first Dalit woman MP from Kerala, who stormed the Left bastion of Alathur, Ramya’s win is among the most talked about events this election season. She defeated two-time sitting MP P K Biju by 1.58 lakh votes.
A native of Kozhikode, Ramya, 32, is the daughter of farm worker Haridas and Mahila Congress leader Radha. “Even during my school days, I was active in the Jawahar Balajanavedi (a Congress platform for children) in my village. Later, I joined Kerala Students Union and became a leader of the Youth Congress in Kozhikode. In 2007, when the Ekta Parishad (a Gandhian organisation) launched a campaign for forest rights for tribals, I joined it,’’ says Ramya.
Ramya was first noticed in 2011 during a talent hunt by Rahul Gandhi, then Congress general secretary. In the 2015 civic body elections, Ramya contested and won from a division reserved for women in Kunnamangalam block panchayat.
Her biggest regret, she says, is that she could not study much beyond Class 10. “Our family’s financial troubles dissuaded me, but I did my pre-primary teachers’ training programme and a short course in fashion designing. I conducted cultural programmes and led motivational classes in tribal and Dalit colonies. With the help of Congress leaders, I also worked as a facilitator for tribal projects in civic bodies. The little money I got through these activities sustained our family,’’ says Ramya.
Ramya says she has not made up her mind on what her maiden question in Parliament would be. But, she says, “what youth need most is skill training. I will strive to bring skill development centres to my constituency.’’
—Shaju Philip