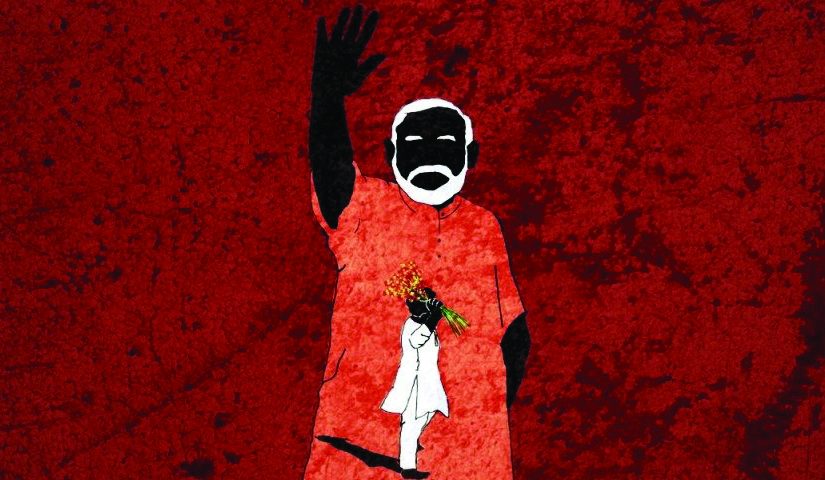 It is with a sense of disbelief and disgust that one read reports about Congress president Rahul Gandhi’s advice to newly elected MPs from his party: “You are going to enjoy yourself; you are going to shout little more than usual. You are going to have to be little more aggressive.”
What is disheartening about the statement is not the content itself but the normalisation of aggression and ‘shouting’. The right-wing has attempted to normalise violence and intolerance. While the former was evident in widespread vigilantism and lynchings, the latter was made visible by opinionated TV anchors shouting down anyone who disagreed with them.

Violence and the freedom struggle

Rahul’s statement, probably a response in desperation, aims to arm Congress members with aggression. Rahul, after trying everything at his disposal to strike peace, still lost to the Bharatiya Janata Party in the recently concluded elections. He responded without aggression when his late father Rajiv Gandhi was viciously attacked and his personal life maligned. He even hugged Prime Minister Narendra Modi — never a stranger to abusive and derogatory remarks — in full public view in Parliament. And finally, he had to be content watching the BJP — hardly an advocate of peace and love — storm Parliament while the Congress cut a sorry figure after the elections.
As a result, he apparently arrived at the conclusion that believing in the value of peace is no virtue. He further argued, “There is no institution that is going to support you in this country, not one is going to support you. It is like during the British period, when not a single institution supported the Congress party, yet we fought and won and we are going to do it again.”
While it is true that the Indian independence movement was mired in violence from 1857 onwards and there was a school of thought that advocated violence to resist violence, the emergence of the figure of MK Gandhi had given a different outline to the struggle. He perfected the art of peaceful struggle (satyagraha) and civil disobedience – two tactics the British were not prepared to deal with in any effective manner. The Empire was finally and non-violently brought down.
Numerous anti-colonial and decolonising intellectuals, such as Franz Fanon, validly did not reject the potential of countering violence with violence. Nevertheless, it is well understood that in a hierarchical and feudal society such as India, the victims of violence have always been, and will always be, the weakest of the weak – the poor, minorities, tribals, Dalits and women.
MK Gandhi was not a perfect man and his takes on caste, race and gender were hardly ideal. However, nobody could accuse him of inciting the masses to be violent and aggressive against the colonising oppressors. If he had done that, not many of the colonising Englishmen would have gone back home at the dawn of India’s independence. That would have left an eternal blot on India’s freedom movement. He famously argued, “An eye for an eye makes the whole world blind” and presented satyagraha not as “the weapon of the weak, but the weapon of the strong-willed”.
The British, burdened by their own countless instances of bloodbath, finally had to bid adieu. Millions perished in the event of Partition. Non-violent freedom fighters, nevertheless, had the last laugh over an imperial army armed to the teeth.
We continue to draw inspiration to fight injustice from this epic battle by taking out protest marches, candle-light vigils and sit-in dharnas. Peace, Gandhian or otherwise, is the way towards discussion and resolution. Peace is against war, and by no means can war be justified. Rahul’s electoral frustration is understandable, but the question here is: can the Congress afford to be aggressive?

Does violence help to counter the BJP?

The BJP is only a political wing of the Rashtriya Swayamsevak Sangh, which has millions of martially trained men across the country. The right-wing propagates a misplaced theory of Hindu victimhood and believes that independent India should have been a Hindu nation and not a secular state. Sectarian propaganda of such a high order has no space for love, compassion and brotherhood. In an earlier article in The Wire, I explained this phenomenon.
The Congress party is a secular and complex entity. It has no RSS of its own and it is not driven by any sectarian ideology. Thus, if it unleashes aggression and intolerance, they might just turn inward. The minorities within the Congress will find that situation inhospitable and leave the party for the open arms of more aggressive groups that can custom-build a new brand of victimhood narrative. The Congress can also remember the fact that it is still haunted by the violence it perpetrated in the past — whether it is during the Emergency or in the aftermath of the murder of Indira Gandhi.
The Congress still represents the idea of India, however weak that idea has presently been rendered. In some sense, the Congress represents everything the idea of India represents, too — democracy, secularism and liberal thought. The Congress, already decayed to the core by corruption, nepotism, entitlement and elitism, will do well not to lose the ideals it has not yet lost.
The party might well have forgotten MK Gandhi’s words: “There are many causes I would die for. There is not a single cause I would kill for.” These words ring true at a time when the reasons for killing someone are as insignificant as his preference of food, religion and opinion.
While the Congress has every reason to be disappointed, changing its core beliefs will not help it defeat authoritarian forces. It should, rather, hold its ground, reform itself thoroughly and strengthen its core values. The decimation of the idea of India, along with the Congress party, will strike a powerful blow to democratic India — from the impact of which it may never be resuscitated.