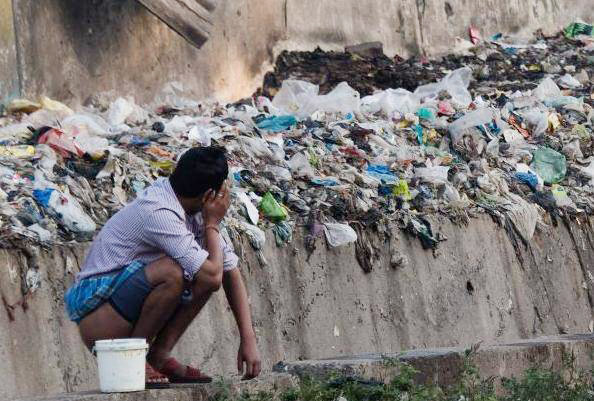 OFF TARGET: Even in urban areas the swachh bharat scheme has not worked. You can build any number of toilets — without a water connection they are useless!

During his five year term Narendra Modi has no doubt introduced a number of welfare schemes including the Swachh Bharat and the Jan Dhan Yojana. Unfortunately in practice they have not worked. Panjim city has not even achieved the target of zero open defecation and there is no money in the Jan Dhan accounts

Housing, sanitation, gas connections (Ujjwala), direct benefit transfers (DBT), income support (PM-Kisan) — contrary to early indications, the Narendra Modi government’s first term proved to be far more welfarist than was expected of a government that campaigned on the slogan of minimum government. With the benefit of hindsight, many pundits now argue that it is this medley of schemes that convinced voters to give the Modi government a resounding encore. Regardless of the many mysteries of the Indian voter, there is no argument that these schemes will remain the hallmark of Modi 1.0.
In their implementation, these schemes had all the ingredients of Modi’s political style — grand announcements, ambitious targets, tight centralised monitoring and outreach — resulting in an accelerated pace of activity. But they also brought to the fore deeply contested questions about the architecture of the welfare state, its functions and capability. The effectiveness of welfare policy under Modi 2.0 will rest on how it navigates this terrain and its willingness to invest in building state capacity.

First, on the relationship between technology, income support and bureaucracy. Technology lay at the heart of the Modi 1.0 welfare project. Early in its tenure, the government embraced Aadhaar and DBT with gusto. And in its last few months, it began the transition to basic income support through PM-Kisan. Underlying this approach is the assumption that technology can substitute for an incompetent and corrupt welfare bureaucracy. Moving money directly to beneficiary accounts removes bureaucratic layers and tightens monitoring, thus improving efficiency and curbing corruption.
But recent studies show that rather than reducing bureaucracy, getting the DBT architecture right requires significant bureaucratic intervention. From opening accounts to promoting financial literacy and facilitating bank transactions, local bureaucrats are critical to DBT.
Importantly, targeted programmes like PM-Kisan require bureaucrats to identify eligible beneficiaries. To do this, critical data like land records and socio-economic caste census needs to be regularly updated and disputes between claims of citizens and official records should be negotiated.
Getting the DBT architecture right, as I have argued in joint work with economists Shrayana Bhattacharya and Lant Pritchett, requires bureaucrats to engage citizens and coordinate across departments — a skill that Indian bureaucrats simply do not posses.
Countries like Brazil and Mexico have invested in large cadres of social workers at the local government level to do just this. But in the rush to bypass bureaucrats through DBT and transfer cash directly into bank accounts, this crucial investment has been ignored. The success of welfare programmes in Modi 2.0 will depend on willingness to recognise that building a competent welfare bureaucracy, even if its only task is to move money, will require empowering local governments with skills and resources.
ACTIVE CITIZEN PARTICIPATION

But responsive governments require active citizen participation. Digitised efficiency risks casting citizens as passive recipients of government largesse rather than active claimants of rights. This is not romantic activism. Technology, by its very nature, creates centralised systems that are distanced and bewildering for ordinary citizens in ways not different to the frustrating everyday encounters readers of this newspaper have with call center agents.
Digitised welfare systems genuinely risk closing off spaces for citizens to complain, protest and demand accountability when rights are denied. The centralised, tightly-monitored push for meeting targets adds to this challenge. Consider the many documented instances of using coercive threats (cutting ration and electricity) to meet Swachh Bharat goals. This is not to argue against administrative efficiency, rather to highlight risks that need resolution. A balance needs to be struck between efficiency gains through centralised control and responsiveness through decentralised, citizen-centric governance. Striking this balance will be a critical challenge for Modi 2.0.
Second, with Ayushman Bharat, Modi 1.0 took a significant step towards engineering an architectural shift in India’s welfare system, away from direct provisioning (government running hospitals and schools) towards financing citizens (through income support and health insurance) and regulating private providers. But can a state that struggles with routine tasks regulate a sector as complex as healthcare? Consider this. In the United States, medicare employs 6,000 staff to cover 44 million beneficiaries who handle insurance audits, pricing, and anti-trust cases.
The staffing requirement, at equivalent levels in Uttar Pradesh alone, would amount to 10,000 employees. Importantly, in a sector like health where predatory practices are rife, well-functioning government hospitals are a necessary check and balance. Regulation cannot be a substitute for investing in public systems. Ayushman Bharat must be complemented with a concerted focus on strengthening public hospitals.
Third, on Centre-state relations in welfare policy, rationalising the 400-plus central government welfare schemes and restoring them to their rightful place — states — remains an important unfulfilled promise of Modi 1.0. This multiplicity of central schemes has served to entrench a silo-driven, one-size-fits-all approach that is inefficient as it fails to capture state-specific needs. The proposed expansion of PM Kisan and the possible transition to a quasi-universal basic income make the need to rationalise existing schemes, and address overlaps and complementarities with existing schemes like MGNREGA, even more pressing.
But, sensible rationalisation needs a coherent framework. The World Bank’s social protection analysis calls for developing a national social protection strategy with a core basket of schemes that states can adapt to their needs. Greater flexibility to states was also recommended by the Niti Aayog’s chief ministers sub committee report in 2016. Implementing these recommendations will require a radical shift in the role of the central government away from designing and controlling schemes to strategic thinking and supporting states.
There are obvious trade-offs with administrative efficiency from centralised schemes that will need to be negotiated. Can Modi 2.0 fulfil the long-awaited promise of cooperative federalism?
Finally, no government can afford to ignore India’s learning crisis. Yet this was one of the most under-prioritised areas in Modi 1.0’s welfare agenda. The newly-released national education policy emphasises the urgent need to ensure all students achieve foundational literacy and numeracy. This needs to be adopted and implemented in mission mode.
Welfare in Modi’s first term was about grand announcements and ambitious targets. But the difficult task of building a high quality, 21stcentury welfare state awaits Modi 2.0. India doesn’t need new schemes, rather it needs consolidation and balancing between competing welfare strategies. Getting this right will require significant investments in state capacity. This is the welfare challenge for Modi 2.0.

(The writer is president and CEO, Centre for Policy Research)