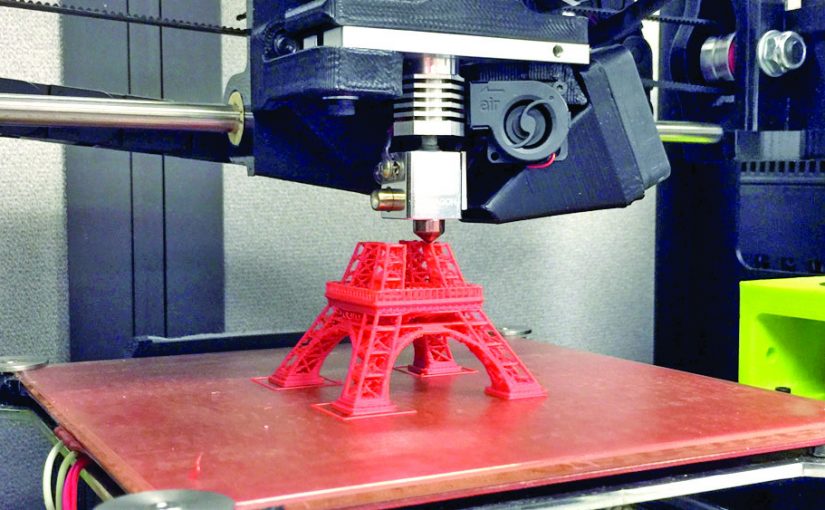 3D PRINTING: The shape of many industries like construction may be transform by 3D printing

In his key note address at the 111th meeting of the GCCI on Saturday last, Dilip Chenoy pointed out that 37% of jobs will require different skill sets by 2020. This may range from specialists in 3D printing, analytics engineers, retail data analysts, block chain architects and virtual reality specialists

The challenge of skills is important for many reasons — first to address the concerns of those enterprises who cannot find a suitable person to employ; second to improve productivity and therefore competitiveness; third to suitable keep the large number of youth gainfully contributing to the economy. Of course there are many more.

There have been a number of studies on Goa to determine if there is a skill gap and if so what could be done. The earliest being the skill gap study done by NSDC around 2012.
Last year, a study was done as part of the Sagarmala Project that covered 21 coastal districts including north and South Goa.
Very recently the Just Jobs Network release a Just Jobs Index for India that ranked states according to the creation of good jobs.
FICCI has also done a study on the nature of jobs last year.
I’d like to cover the findings of the study and the way forward in Goa. I believe there is an opportunity for collaboration between Government and GCCI as well as GCCI and FICCI and within industry.

Goa is one of the fastest growing states in the country. The Gross State Domestic Product of Goa at current prices increased at a Compound Annual Growth Rate (CAGR) of 10.65% from 2011-12 to 2017-18. Goa’s economic growth is driven by the strong performance of industrial sectors such as mining, tourism and pharmaceuticals.
Goa has a coastline of about 104 kms and inland waterways Marine fish production in the state up to October 2018 was 89,266 tonnes while inland fish production was 4,124 tonnes.

However there are some challenges. It would be best if I quote a para from the GCCI News letter.
“From agrarian to tourism to mining, we were flourishing. And then came the greed. Over the last 10-12 years, we have slowly but surely allowed our ‘sussegado’ to be replaced by avarice. Mining provided jobs to thousands. Resultant businesses in turn, were livelihood givers to thousands of businesses and lakhs of employees. The mining debacle is a self-invite done by a few unscrupulous ones which led to the shutdown of an entire industry and affected many lives. Similarly, the traditional ‘xit kodi’ and other local fish delicacies have had tourists asking for more. Unfortunately even this has been given a terrible body blow by the ‘formalin controversy. Now, another bastion of the Goan economy, the tourism industry has perhaps recorded its lowest ever December a month back when from 100% occupancy, the occupancy rate went as low as 30-60%”.
As demonstrated by the address today, the Chamber and Government are working together to energise the economy and increase investment and rate of growth. This is an imperative for Goa going forward. It is clear that the young leadership led by the Hon’ble CM means business.
Second, Goa with an average literacy rate of 88.70%, fares fairly well when compared to the national average of 74.04%. North Goa (89.6%) has a better literacy rate as compared to Goa (88.7%) as a State. The literacy rates are higher amongst males (93.4%) as compared to females (85.6%) in North Goa. South Goa also has a very good literacy rate but a little less than North Goa and thus the State average. 87.6% people are literate in South Goa. And has more literacy amongst males as compared to females.
Third, The state’s working age population is likely to grow from 10.4 Million in 2012 to 10.8 Million in 2017 to 11.3 Million in 2022 adding approximately 40k additional working age population from 2012 to 2017 and 50k from 2017 to 2022.
Fourth, Given the relatively lower willingness to work among the local population, reflected through the Labour Force Participation Ratio (LFPR), In North Goa, 79.5% of the population in the age group of 15-24 years are non-workers, In South Goa, 80% of the population in the age group of 15-24 years are non-workers. The estimated skill gap in the state over 104.8k respectively, which indicates huge quantum of project skilled manpower deficit for the state.

A recent Mckinsey survey shows that only 16% of private-sector business leaders in India feel “very prepared” to address potential skills gaps, with roughly twice as many feeling either “somewhat unprepared” or “very unprepared.” The majority felt “somewhat prepared”-hardly a clarion call of confidence. The Chamber could begin to educate members on this transformation so that firms in Goa remain competitive.
Ninth, A Deloitte Global Millennial Survey 2019 has reported that about 94% of millennials and Gen Z respondents in India are Keen to explore gig economy roles — flexible and contract-based work with multiple firms — as against the global average of 80%. The reasons range from the possibility of higher earnings and flexible working hours to better work life balance.
So therefore in such a scenario, it is necessary to take a twin approach. First identify the key sectors and second to then develop and action plan to address the skills gap in the different sectors. As Minister for IT, Labour & Employment Rohan Khaunte has said, it is important to get data.
In Goa, the priority sectors that have been identified are Ports, Tourism & Hospitality, Logistics and Construction. Other sectors that have been identified from the point of view of their contribution to district GDP are Banking and Finance Services and Manufacturing. Within the MSME sectors, hospitality, eco-tourism and manufacturing are the upcoming areas where the investments have been proposed and is expected to create employment for approximately 22,879 persons.

WHAT CAN BE DONE

So what can be done in terms of skills. FICCI has proposed and Agenda for the New Government. Adapting some of those Key recommendations for the Goa Government could be to firstly aim at addressing the immediate capacity additions and modifications across courses in the 10 Government and five private ITIs. Courses aimed at Hospitality, IT & ITes, Retail as well as Manufacturing.
Second, Add on courses should be introduced in the Polytechnics and Engineering Colleges.
Third, Mainstreaming and integrating of Vocational Education with school education is key to make it aspirational for the young generation. (A child spends 14-15 years in school, 3-5 years in higher education. After 18-20 years of education, its difficult to make skilling aspirational for both parents and the youth.)
Fourth, Institutional mechanism for career guidance in schools, ITIs/Polytechnics, Higher Education Institutions and mid- career professionals must be developed.
Fifth, Fast-track implementation of National Skills Qualification Framework (NSQF). The NSQF provided a five year implementation schedule in Dec 2013 which stated that after third anniversary (Dec, 2016) Government funding would not be available for any training/ educational programme/ course which is not NSQF-compliant. Goa could be one of the states that implements it.
Sixth, Creating an Industry 4.0 technology ‘Centres of Excellence’ in Goa, with access to ITI and polytechnic graduates to train in future technologies.
Seventh, While at the national level, FICCI has recommended creation of a ‘National Reskilling Fund’ with a corpus of `1,500 crore spread across three years (till 2022) to mitigate the disruptive impact of emerging technologies on the workforce. Goa could initiate its own fund.
To incubate the spirit of entrepreneurship amongst young Goans, as you heard the Minister, Government of Goa has stepped up its efforts to develop Goa as the Start up Hub. To encourage local youth and attract young entrepreneurs and innovators from India and abroad, Goa Government has set up start up incubators, provided funds and tax incentives and organises Hack-a-thons etc. The Chamber has also been doing some good work in this area. this needs to scale.
However unless there is support to the expansion of IT based businesses across the tourism and other sectors, a major area of opportunity for the youth to participate may be lost.
Eight, Given the low labour force participation rate, but yet the aspiration to be in a job, it is imperative to make jobs attractive. One way could be to invest in developing local ecosystem for State skill competitions and expose aspirants to international skill competitions such as Worldskill Competitions. Recognise and Showcase ‘role models’ including on TV. I am sure many of you have seem Master Chef? What some of us may not know that one of the reasons that the show was created was to address the lack of specialised persons to work in the food industry in Australia while Australia was positioning itself as a tourist destination. The success of the show created an aspiration among youth to be part of the industry.
Ninth, A “Skilled Goa” campaign could be launched where every worker in a sector, eg; tourism, logistics, manufacturing would be certified through a Recognition of Prior Learning RPL process. This could be an enabler to develop the missing data base.
Government should target a special drive for a 100% of RPL in mission mode within a stipulated timeframe. This could then be built into the brand of Goa.
There is of course a role for Chambers and Industry. Chambers and industry would need to support the Government in this campaign by working towards a 100% certification of the work force as well as encouraging their vendors and suppliers to do so.
The Chamber could partner Government to promote apprenticeship in its true spirit amongst local community as well as industry for preparing industry ready workforce. This should be adopted by the local industry and youth. FICCI has some models and we could share these with you. These cover Communication and Outreach: Technical Capacity Building Workshops: Resource Mapping and Utilisation: Quality Candidate Moblisation.
For Industry, lets take the logistics sector as an example. Logistics sector has a huge manpower requirement. The skilled labour demand is expected to grow with an incremental requirement of around 42,000 people. Against this, the current supply of skilled manpower is almost negligible. There are limited training and certification options available for logistics sector workforce. To again quote from a newsletter “Logistics is another sector we have been stressing on. Cold chain has experienced phenomenal growth in the last few years. The growth has doubled almost every five years. However logistics in general, is a highly fragmented and unorganized market. There are serious deficiencies of skilled manpower. If the largely family owned businesses in logistics have to scale up, an infusion of professionalism is required. With technology coming into play into every aspect, adequately trained operational, supervisory, middle and senior management persons are required to gear up to take on challenges. Therefore other than investment in infrastructure, investment in manpower is required. That includes resources for training and development. Clearly an agenda for Industry to work on.
There are issues, there are challenges such as the nine I mentioned — economic activity, aversion to learning, growing youth numbers, willingness to work, aspiration, preference for wage employment, changing nature of jobs, gig economy and low ranking, but none so difficult or large that a partnership between Industry and Government cannot surmount and address as in the nine suggestions.

Align capacity to need, mainstream Skilling in education, career guidance, implement NSQF, create and industry 4.0 Centre, establish reskilling fund, RPL and completions to glorify Skills, Skilled Goa mission.
We can enable Pride in Goa through a “Skilled Goa” campaign, transforming the youth and building a new ecosystem in Goa that gets the youth to enjoy work and re-energise the economy and the state. Goa could be number 1 on the Just Jobs Index.
Let’s get to work!