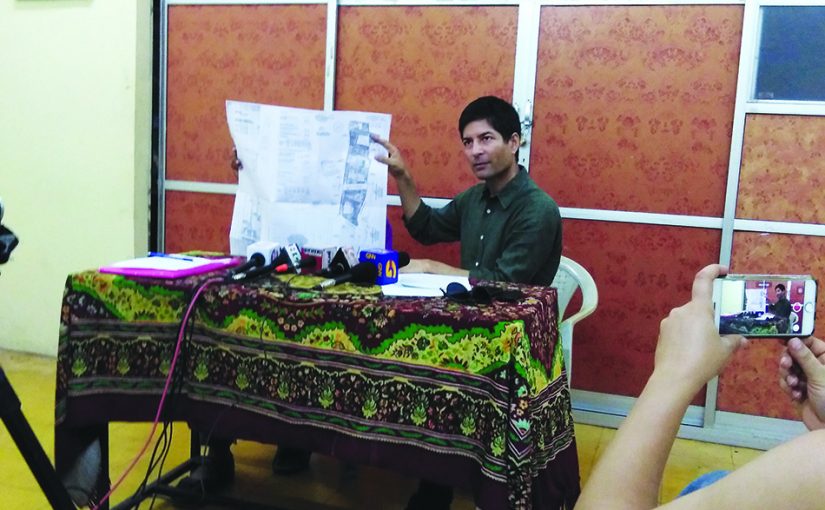 By A Special Correspondent
THIS happens rarely in Goa! That someone most Goans would perceive as a baile (outsider) dares to take on a builder by exposing a veritable hornet’s nest of illegalities, plus cheating and committing fraud, violating approved building plans, encroaching public space and to cap it all intimidation and assault on a flat owner! Gaurav Bakshi’s story is worth listening and learning from. A builder in Goa has conned him and his wife in the matter of the purchase of a flat in Taleigao.
In search of a bit of peaceful living Gaurav Bakshi and his wife Rupinder Kaur were influenced by their Goan friend Lakshmi Kurtikar into investing in a two-bedroom flat of 119sqmts with a terrace of 500 sqft, at Martins Palm Fringe’ in Taleigao some time in 2015-16. They even took a loan of60 lakh to altogether pay the price of 2.12 crore quoted by the builder-promoter of the property named Martins Developers (made of partners Sheldon Martins and Neesha Varela). They moved into the flat in August 2016, only to realise how much they had been cheated and conned! Speaking to media people on July 10, 2019, Gaurav Bakshi recounted a nightmarish yet familiar story of folk who invest in property in Goa without checking it out thoroughly before purchase. Say they have been a naïve couple and are paying the price for it now. For the last one-and-a-half years, says Bakshi, he has just been tracking down all the illegalities committed by the builder in the building complex of some 52 flats, most of which are occupied with the exception of perhaps 12 flats or so. Corruption most of us take for granted in urban India and may be even turn a blind eye too, but Bakshi says he didn’t expect to find it to such an extent in a paradise like Goa! As soon as they settled in, in bits and pieces he noticed all the illegalities indulged in by the builder, “The property has not been registered and he refused to provide a succession deed which is essential for registration of sale deed and so on.” They have not only been cheated about the pricing of their flat but hey, take a look at all the other frauds committed by this builder. Not one to take all this lightly Gaurav decided to pursue all the illegalities and finally registered an FIR under IPC section 420, 406 and the relevant government departments have served both demolition and penalty notices to the builder much to the builder’s ire. Never mind that in the first place all the illegalities committed ought to have been checked out by the proper authorities in power much earlier on and today several flat owners don’t understand how the builder could have got away with the kind of illegalities committed. It’s such an eye-opener on the subject of what goes on between builders and various government licensing departments perhaps! What do you do? Most may shy away from confrontations but Bakshi is not one to take kindly to intimidation, threats and even assault and decided to make an example of the builder and take him to the cleaners, he’s dealt with corruption in Noida and other places before, he says, and, “In this matter too I’ve filed a consumer case in NCDRC, New Delhi. The Consumer Court has a good reputation for delivering justice and they don’t take forever either…so I’m positive I’ll be able to get my money back with interest!” Goa is not the only corruption-ridden state in India where builders can virtually get away with murder. It’s a pity not many media people turned up for his conference to highlight a common aam aadmi experience when investing in a home. Going by a backgrounder he distributed, Gaurav Bakshi is no non-entity. One learns he a celebrity actor, journalist and corruption activist of some distinction, having been involved with the historic anti-corruption movement of Anna Hazare, as also a co-founding member of India Against Corruption. He has appeared on national and international media and at some point launched a ‘Choosna Bandh’ campaign which gathered widespread interest and support in Noida. He has been in and out of the news vis-à-vis the exposure of various corruption rackets and is now quite confident his fight for justice in Goa will soon see the light of day and do much to educate others who dream of investing in property in Goa. Please don’t be conned like he and his wife have been! A bit of other good news is that several other flat owners where they’re staying are now cognizant of the violations and have decided to file cases independently against the builder. He wished the media would take an interest in his story and follow up with it for common good of all those buying property in Goa! In the meantime, he says, “I’ve stopped paying my flat’s outgoings of4,000 to 5,000 monthly, including some3,000 for water we get through water tankers…”
Gaurav Bakshi hasn’t made up his mind but it sounds like he wants to get out of a paradise called Goa! His wife loves it here though.

Bakshi claims siginificant questions remain…
a. How was completion certificate issued by Shaikh Ali (Engineer)/GPPDA/NGPDA, despite incomplete construction (till date), numerous approved plan violations, encroached public road (deleted & added back by GPPDA), structural changes inside flats, enclosed balconies, illegal sale of terraces etc that all are aware off. Ali is Engineer for many years – Why?
b. How was OC issued, despite incomplete construction & numerous approved plan violations despite GPPDA, VP being aware of all violations?
c. Why did illegal construction continue despite Construction License suspension and post completion certificate issuance?
d. Various Depts (GPPDA, SDM, DoP, Vigilance) are currently investigating how govt officials are hand-in-glove with builder in getting illegal approvals. What action will be taken?
e. How many builders are getting away with such blatant violations and behaviour across Goa? What are the govt and law enforcement agencies doing about it?

TIMELINE AS SHARED BY GAURAV BAKSHI