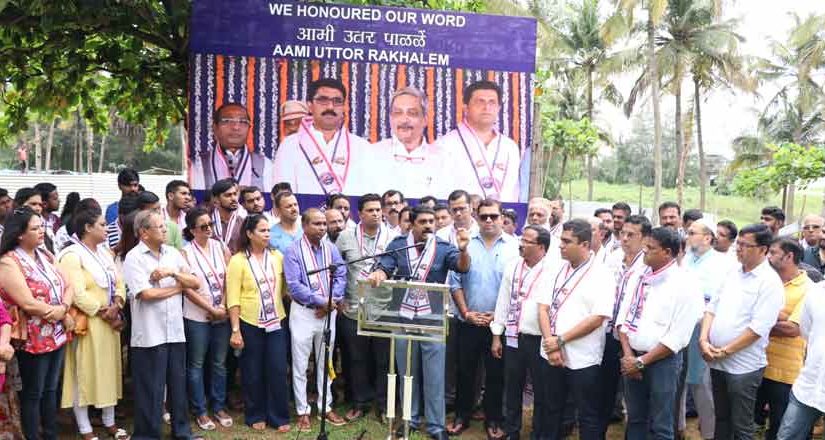 REVENGE: Goa Forward marched backward with the BJP dropping all three GF ministers from the Cabinet. This was because of Vijai’s reluctance to drop one of his ministers to accommodate Michael Lobo. Vijai Sardesai accompanied by Vinod Palienkar, Jayesh Salgaocar (Goa Forward Party MLAs) and Rohan Khaunte held a meeting where Parrikar was cremated saying the induction of ten MLAs of the Congress into the BJP was the “death of the legacy” of late Chief Minister Manohar Parrikar

No other state has shown such talent for getting around anti-defection laws. The latest mass merger of the Congress preceded by the merger of the MGP is only the culmination of a long history of double crossing in Goa starting from statehood to the present day. The MGP was destroyed by the Congress in the ‘90s. Let us hope the Congress defectors, like the Trojan horse, destroy the BJP from the inside

No other state in the country has shown the genius of Goa in subverting the Representation of People’s Act. The act is meant to ensure that members voted in on the symbol of one party, do not defect to another without resigning and re-contesting the election. The problem then arose over Independents. Should they be allowed to join any political party after being elected as an Independent. Every time the Election Commission and Parliament blocked a loophole, our clever politicians of India and particularly of Goa came up with a fresh solution.
It was decided by the EC that if 2/3rds of the members of the Legislative wing of any political party in a State or at the Centre split it would not attract disqualification. Not once but twice in just the months of June and July, the BJP has taken advantage of the fact to destroy the MGP first, and then the Congress.
In the first instance, during the assembly by-elections the BJP persuaded two of the three MGP MLAs, Babu Ajgaonkar and Deepak Pawaskar, to merge with the BJP. This was punishment for Sudin Dhavalikar defying the BJP and failing to persuade Deepak Dhavalikar to withdraw his contest against the Congress defector and BJP candidate Subhash Shirodkar. This reduced the MGP to a party of one MLA and that to without any berth in the Cabinet. The BJP not only stole two of three MGP MLAs but also dropped Sudin Dhavalikar from his post as minister for PWD.
In an action replay of the same tactic for subverting democracy and the Representation of People Act 1951, the BJP got 10 of the 15 Congress MLAs to defect to the BJP. This again was done under the provision that if 2/3rds of the members of a legislative party break away from the parent it would be considered a split and not an act of defection which would invite disqualification.
While the whole revolt was being planned for quite sometime, the immediate provocation was the denial of a Cabinet berth to Michael Lobo, the Calangute MLA. It was Lobo in fact who was responsible for facilitating the formation of the Parrikar government even though the BJP had won only 13 of the 40 seats in the Assembly. Lobo went to Vijai Sardesai and got him and three Independent MLAs to extend support to the BJP to form the government. Nitin Gadkari had already got the support of three members of the MGP.
Despite Michael Lobo’s great contribution to bringing the BJP to power he was only given the post of deputy speaker in the Cabinet. The bulk of the Cabinet seats were given to the allies, three for the Goa Forward and two for the MGP. Lobo had proposed to Vijai Sardesai that one of the Goa Forward members should step down so that he could become a Cabinet minister. This was turned down by the arrogant Vijai Sardesai who did not realise that he occupied the post of deputy chief minister because of Lobo.
LOBO & BABUSH

Fortunately for Lobo, Babush Monserrate, who was elected on the Congress ticket, realized that the party had no future after Rahul Gandhi resigned as president. The situation was compounded by Girish Chodankar resigning as president of the GPCC. Of the 15 members of the Congress party, half a dozen owed allegiance to Babush.
Babush had been instrumental in getting a ticket and financing the election of his wife Jennifer in Taleigao; Tony Fernandes in Santa Cruz; Francis Silveira from St Andre and Pandurang Madkaikar from Cumbarjua. In addition Canacona MLA Isadore Fernandes was an old friend of Babush. So when Lobo came to Babush with the suggestion that ten Congress MLAs comprising 2/3rds of the Congress Legislative Party split and merge with the BJP, Babush had no problem finding four more MLAs.
CATHOLIC BJP

The bulk of the MLAs who have defected to the BJP are ironically from Salcete which was not only the stronghold of the Congress but dominated by Catholics. The result is that of the 27 BJP MLAs in the Legislative Assembly after the merger, over 2/3rds are Catholics. It is not clear if the Congress has taken over the BJP but clearly the Catholics seems to have taken over the Hindu party in Goa.
Very shrewdly Babush decided to give his Cabinet seat to his wife Jennifer in view of the cases pending against him. Vijai Sardesai, who was insensitively arrogant with Michael Lobo, paid the price, as all GF Ministers were dropped along with Independent Porvorim MLA Rohan Khaunte. The former chief of the Congress Legislative Party, Babu Kavlekar, has been appointed Deputy CM with the TCP portfolio previously held by Vijai. The other two ministers are of course Michael Lobo and Filipe Neri.
The appointment of Neri as a minister is perhaps atonement for how Parrikar treated him after the 2007 election. Since the BJP had a shaky majority it had sought support from Neri who was an Independent. When Neri refused to vote in favour of the BJP he was physically removed from the Legislative Assembly by the marshals and thrown out on the grounds that he was a member of the BJP. It turned out that the so called original membership form of Filip Neri was forged. Both the original allies Vijai Sardesai and Sudin Dhavalikar are out with their place taken by the Congress rebels.
This is not the first time that Goa has proved Nehru’s comment that Goa ke log ajeeb hai. The comment was made because in the first general election held after Liberation the people of Goa did not vote a single Congress candidate. Nehru had thought that the people of Goa would be grateful to the Congress and would vote them to power. Instead Goans gave the majority to the MGP which was formed to merge Goa with Maharashtra.

Just as Babush and Lobo destroyed the Congress recently, Ramakant Khalap, the president and Ravi Naik, the acting president, destroyed the MGP way back in March 1990. There was a revolt against the first government to be formed after Goa achieved statehood on May 30, 1987.
Towards the end of the tenure of Pratapsingh Rane the first chief minister after statehood, Churchill Alemao along with Proto Barbosa revolted against the Congress. They persuaded half the 14 members of the MGP to join them so that they would have a majority. Ramakant Khalap, the then boss of the MGP, was tempted with the offer of deputy chief minister. He was so power-mad that he even got the old khatara Mercedes car used by Rane as chief minister allotted to him. But he was very frustrated by Churchill Alemao and we used to have long discussions at the Bambolim Beach resort. Inevitably the vintage Mercedes would stop on the slope and all of us had to push it.
The Congress led by Dr Wilfred D’Souza decided to take revenge against Churchill Alemao and Khalap. The Congress managed to get the remaining seven MLAs of the MGP to join them and made Ravi Naik, the second in command in the MGP, the Chief Minister. Unfortunately for Ravi Naik he was disqualified by the Goa Bench of the Bombay High Court and had to step down. Dr Wilfred D’Souza than took over as CM. The disqualification of Ravi Naik was set aside by the Supreme Court. The then governor, without consulting the Centre, dismissed Dr Wilfred D’Souza and appointed Ravi Naik as CM again. The Centre sacked both the governor and Ravi Naik who on the second occasion was chief minister only for six days from April 2 to April 8, 1994.
This was not the end of defections in Goa. After the 1994 elections Pratapsingh Rane was re-nominated CM as the Congress got the majority. Dr Wilfred D Souza was upset and revolted against the Rane government and formed the Goa Rajiv Congress Party. Luizinho Faleiro toppled Dr Wilfred and became the chief minister. But there was so much uncertainty that the then BJP government at the Centre declared President’s rule.

Indeed, the golden age of good governance in Goa was the tenure of Lt General Jacob who was the hero of the Bangladesh war. He was not only the most honest head of the state but was also responsible for notifying Mhadei and Netravali as sanctuaries in the face of opposition from mine owners.
At the end of President’s rule, in the elections held in 1999, Luzinho Faleiro became the chief minister. This was resented by his colleague Francisco Sardinha who revolted against him and formed the government with the help of the BJP, which had four members including Manohar Parrikar.
The new millennium started with the first toppling by the BJP in 2000 when Manohar Parrikar withdrew support to Sardinha and became the CM himself. Ravi Naik joined him as Deputy CM. The first Parrikar government lasted from October 24, 2000 to February 2, 2005. He was toppled with Rane again becoming the CM. There was another spell of President’s rule between March 4, 2005 and June 6, 2005, after which Rane became CM again. On the completion of his term, Digambar Kamat became the chief minister for one complete term.
The only two chief ministers who have completed their full term in office since statehood are Pratapsingh Rane and Digambar Kamat. Manohar Parrikar could not achieve this distinction as after the 2012 election he was asked to take-over the Defense Ministry in New Delhi. And of course barely two years after his 2017 victory he lost his battle with pancreatic cancer.
Hence, between May 30, 1987 when Goa became a state and July 13, 2019 there have been 19 governments. Which dramatises how frequent defections have plagued Goa.
Goa has received many awards. Year after year various magazines particular in India have been calling it the best state. More recently they are calling it the best small state. Never mind that Goa has not even been able to achieve the zero-open defecation target. Or the fact that the High Court recently blasted the Goa government for pitiful garbage management. In the latest rankings Goa is most backward in employment.
The only area where Goa tops all other state government is in the art of defection. Goa needs to be awarded the gold medal for converting a democracy into a ‘democrazy’.