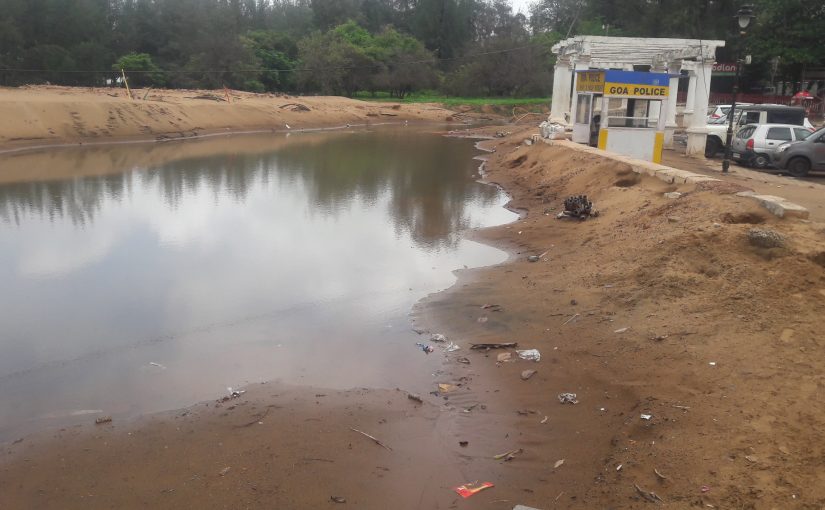 The recurrent flooding of Miramar circle brought a strange ‘solution’ to light. Panjim MLA Babush Monseŕrate has made a ‘pond’! Well, almost. He got a JCB to come to Miramar beach to move the sand creating an artificial pond of sorts for water to be captured. Many photographers gathered to take pictures of this pond in the area near the pergola.

While pedestrians and those who drive or ride by the area regularly could have some relief from the constant flooding, critics were not hard to find who criticised the concept as a ‘short-cut’ solution that will create more problems soon. Mosquito breeding was at the top of the list, with some agonising over stray dogs gathering to drink water from the pond. The police check post also did not seem happy as this has created more of a hazard for people brave enough (or foolish enough) to venture on this once popular and family-friendly beach.

Empty plastic piping can be seen damaged by the JCB. These were earlier supposed to be laid for electric mast and beach lighting by the Electricity dept. These are now damaged and a waste of the public exchequer.
Ironically, this is not far from where the `10 crore Parrikar Samadhi is supposed to come up.

While Manohar Parrikar had presented a brief summary of the budget in January, the entire document could not be read out in the state Assembly on account of Manohar Parrikar’s failing health.
“I am only reading out the budget which was prepared by late Manohar Parrikar, which he was not able to read due to poor health,” Sawant said.
In his speech, Sawant projected a revenue surplus of 455.10 crore, while listing estimated expenditure from the revenue account at13,308.26 crore and `4,987 crore as capital account expenditure.
The Chief Minister also said that his budget focused on core areas like health, agriculture and employment, while also looking to expand Goa’s tourism industry.
Sawant also said that tackling the waste generated in the state was one of the key priorities of the government. He also proposed the development of a ‘plastic waste to diesel’ generation facility at Pernem in North Goa to tackle the menace.
With constant complaints about the dilapidated condition of records and documents, especially those from the Portuguese era, Sawant said that the government would opt for preservation and geo-referencing of all land records.
“Geo-referencing is the need of the new digital age. Therefore, keeping this in view, I intend to implement Geo-referencing of all land records, which will be partly financed by the Government of India,” Sawant said.
Sawant also said that NGOs would be roped in to ensure that all girl students enrolled in government schools were provided with sanitary napkins in the interest of hygiene and to avoid absenteeism.
“My government has involved NGOs to provide sanitary napkins to all the government high schools and higher secondary schools at normal price along with dispenser and incinerator for disposal facility which can be directly availed by the girl students,” Sawant said.