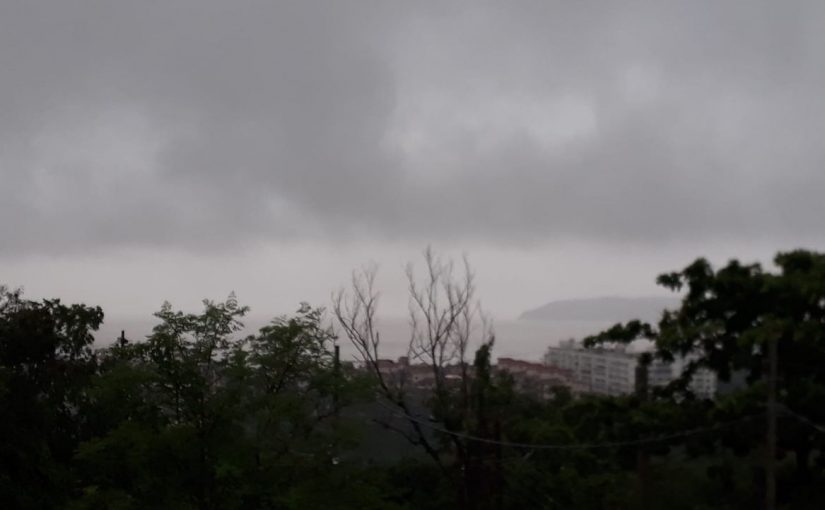 DARK MONSOON CLOUDS! Our favorite man of law advocate Nigel da Costa Frias clicked this brooding poetic rainy day picture and posted it over social media this week commenting, “Dark monsoon evening in Goa, beautiful as it is, it’s so reflective of the ominous Constitutional crisis Goa and the country in general faces today. There’s no sanctity left in our multi-party democracy.” Adding our own two-bit re-comment…skies too are weeping with you, dear friend, hopefully this too shall pass!

Dear Vijai, In March 2017, I publicly warned and cautioned you that the BJP would use you and conveniently dump you like a hot potato. The predicted has now happened and you have been overnight left in the lurch powerless and speechless reaping what you had greedily sown. You chose to ignore the natural law of karma that says ‘What goes around comes around’ whatever you do will come back to you at some point. A deliberate act of folly all because you were blinded by the lure of the Rupee and the glitter of casinos.
It is intriguing that you have had the rank audacity of accusing Congress MLAs of acting like monkeys wanting to cross over. All this after your very own grand betrayal of Goa and Goans on March 11, 2017. It is worth remembering that monkeys are well known for eating and devouring coconuts! Needless to state the COCUNUT is the symbol of your Goa Forward Party which over the last two years has swayed Goa very backwards.
Vijai, you are the last person that should speak against the Congress, which is a party you owe it all to. Your fate may soon be no different to that of our once common friend Pandurang Madkaikar, who is today facing the wrath of divine justice.
Having once been your very close friend and well wisher like our distinguished Dr Francisco Colaço, I may be upsetting you, but by maintaining silence I would be hurting thousands of Goans across Goa and around the world that now hold you in rank bitterness.
The people of Goa once thought and hoped that you were the future of Goa. They were all for your promises: Goem, Goenkar & Goenkarponn. In the 2017 Assembly elections they supported you thinking that you were a beacon of hope to fight the Corruption, Nepotism and the U turns of the BJP as a result of your outbursts against the BJP. But in double quick time your lust for power and that moolah got the better of you and you became a chameleon overnight for which you will never be forgiven. The people of Goa will never pardon you for having had the cheek of betraying our Goem, shocking every Goenkar, and deceitfully and selfishly forsaking your very own Goenkarponn.
With lightning speed you selfishly embraced the BJP overnight, committing the mother of all U turns. Regrettably you disgraced yourself, your family, your Constituency and most importantly your Goa. A Judas you proved to be. The great Goan and your uncle, the late Ravindra bab Kelekar and your late dear sister, our very great literary icon Madhavi, must have been rolling in their heavenly abode in disbelief of how you rashly took Goa and Goans for a ride.
Vijai, you cannot and will not ever be trusted by Goans again. I was stunned that you dared trust the BJP, a party against which you rightly and publicly spewed very nasty venom and which had then even tried to implicate and arrest you in the infamous Louis Berger case.
You chose to face the public wrath and condemnation for the rest of your life for having deeply hurt every Goan. Despite your betrayal, Goa will overcome and survive to see Goem, Goenkar and Goenkarponn.
As Agriculture Minister you fooled us that our vegetation will grow, as Forest Minister you asked us to plant more trees, but as the Town & Country Planning Minister you, in broad daylight, destroyed our remaining fields and hills, not sparing even our scarce forest cover so that you could make merry in connivance with the real estate mafia of which you have for decades been a very integral part. You failed to practice any fantasy you preached.
As was predicted by me two years ago, the BJP has shown you your place by doing a U-Turn similar to your U-Turn. I only pray that on account of your blatant and unforgivable sins, that your family does not have to face the brunt.
Vijai, may I leave you with those worthy words of Billy Graham, “When wealth is lost, nothing is lost; when health is lost, something is lost; but when character is lost, all is lost”.
— Aires Rodrigues, Ribandar

Augean Stables
Before the 2019 Goa LA and Lok Sabha Elections, I had advocated the need of getting all new candidates, i.e. to nominate and elect 40 new faces. Sadly, Goa is slow. However, the new developments have made our task easier, at least for the Congress. They now have to drop the deadwood and get entirely new faces at all levels. Goa has been made a mess by these people and the only way one can clean the same is to drop all the past brigade.
Don’t look a gift horse in the mouth: take this opportunity and start revamping. Don’t waste time analysing the defectors reasons: we want to develop our constituencies etc. Do you seriously believe them? Forget it, just ignore and even refuse the development. Remember, any ‘development’ by such people will be for their personal gain, you will be better off refusing such development.
However, justice must prevail and the voters need to confront them and make their views heard. Then boycott them. Unity is of prime importance now. Anyone supporting such people must also be boycotted.
— R Fernandes, Margao

Wimbledon Wonder MomS
Whoever emerges victorious, either star-spangled Serena Williams or exquisite Simona Halep in the finals of the Wimbledon Championships on the 13th, the strawberries and ice-cream will taste the sweetest and the champagne will sparkle the most as the world’s two super moms battle it out for glory.
Serena has the most enviable target of equalling the record of Margaret Court — 24 Grand Slam titles — though Serena will be winning in the Open era, while Court did it in the earlier era. No one will believe that the 37-year-old Serena can perform such a feat of heady distinction in the Open era, with such fierce competition and with so many jostling for success.
The consistent Simona Halep is playing the best at Wimbledon and stands in the way of preventing Serena from scripting history. It will be Simona’s first Wimbledon title and her second career Grand Slam after she won the French Open last year at Roland Garros. Her fairy tale comebacks have made her a very serious contender with her never-say-die spirit. Picking a winner will be like tossing a coin.
Let’s wait and watch who lady luck will shine upon on Saturday. Tantalisingly poised, anyway a super climax is in the offing, a fairly tale affair that will wow the world when game, set and match is declared in the summit clash
— Elvidio Miranda, Panaji

ARAVIND BHATIKAR CORRECTIONS!
APROPOS to your piece on the occasion of my 80th birthday and 50th wedding anniversary, while thanking you for the gesture of writing it, I would like to make a few corrections.
To the best of my knowledge there is no rule which empowers IAS officers to choose a posting in their home state prior to retirement. I was the chairperson of Mormugao Port Trust for six, not ten years. I retired in 1996. Dr Manmohan Singh was not fortunate enough to be my boss since he became the prime minister in 2004. Besides, I neither had the seniority nor the requisite proximity to political power centres for appointment as cabinet secretary.
I was a batch mate of Gopalaswami (not Krishnaswami), the then chief election commissioner, and P Shanker (not N Vittal), the then chief vigilance commissioner. I have never and will never advocate government financing primary education in English. I am a founder member of the Bharathiya Bhasha Suraksha Manch (BBSM) and continue to be closely associated with the Goa Suraksha Manch (GSM). Konkani is the mother tongue of Goans and our government should finance primary education for Goans only in Konkani.
My wife Snehalata has done her post-graduate diploma in counseling from the Christian Counseling Centre, Vellore, not Christian Medical College. I have tried to set the record straight here even though I am aware that very few readers would be interested in the above details!
— Arvind Bhatikar, Caranzalem