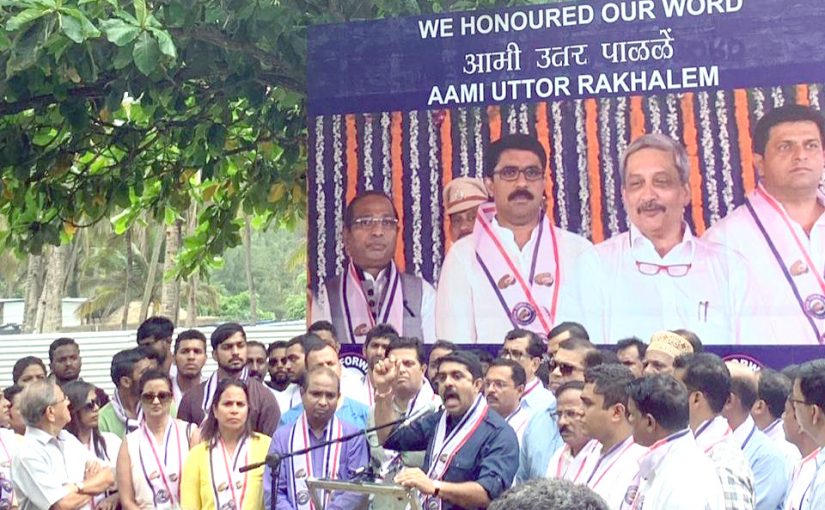 PROTEST: To stress on the injustice to Saraswats, Vijai Sardesai and Rohan Khaunte had a protest meeting at the Miramar beach spot where the late Manohar Parrikar was cremated

Saraswats ­— who have dominated the administration of the State ever since Statehood — have been marginalised in the Pramod Sawant government. Not only have Vijai Sardesai and Rohan Khaunte been dropped, but both AG Dattaprasad Lawande and former AG Atmaram Nadkarni have been sidelined. The CM has also moved out babus close to the former CM, like Michael D’Souza and Ameya Abhyankar. The latest target is Dr Mahesh Sardesai, HOD Radiology, who was on a ten year extension…

Vijai Sardesai and Rohan Khaunte have been unceremoniously dropped from the Cabinet. Vijai Sardesai was becoming more and more arrogant and was acting as though he was the chief minister, not Pramod Sawant. The Goa Forward chief was even claiming to be a partner of the NDA and not the coalition government in Goa. Significantly he started targeting the new government of Pramod Sawant after the death of Manohar Parrikar. Vijai Sardesai is acting as though he is the heir to the legacy of fellow Saraswat, the late Manohar Parrikar. Rohan Khaunte on his part also has been getting very aggressive. Perhaps it is typical of the Saraswats, who think they are born to rule, that they have a sense of entitlement over power.
Indeed, when they were dropped from the Cabinet, to prove the Saraswat brotherhood they had a protest meeting at the cremation site of Manohar Parrikar on Miramar beach next to the samadhi of Dayanand Bandodkar, the first chief minister of Goa.
Pramod Sawant, who obviously is not a Saraswat, seems to be acting in the tradition of the first Chief Minister Dayanand Bandodkar. The over smart Saraswats thought that the government will collapse after the death of Manohar Parrikar and the sacking of the Saraswats and the bhatji Sudin Dhavalikar from the Cabinet. They are disappointed that the government is working quite smoothly.
Pramod Sawant has demonstrated that he will chart his own course and will not blindly follow the road map designed by Manohar Parrikar.

Parrikar had a habit of being over generous with close friends who often exploited him.
Among the closest associates of Manohar Parrikar was Atmaram Nadkarni the former advocate general of Goa. When Parrikar became defense minister, Atmaram Nadkarni accompanied him to Delhi and was appointed additional solicitor general. When Parrikar cobbled up a government in 2017 he appointed one of Nadkarni’s juniors, Dattaprasad Lawande, advocate general of Goa. Parrikar had also authorized Nadkarni to represent Goa before the Mhadei tribunal and all other cases like the mining case in the Supreme Court in New Delhi.
There is no disputing the fact that Atmaram Nadkarni is a very good lawyer. Sushant, as he is popularly called, is a fighter. But this does not justify the huge fees in crores that he was paid as advocate general of Goa. Even more scandalising was the large amounts of money he was paid for representing Goa before the Mhadei tribunal and the Supreme Court.
Even greater than the shock of hearing that Vijai Sardesai and Rohan Khaunte were dropped from the Cabinet, was the shocking news of the sacking of Atmaram Nadkarni.
Chief Minister Pramod Sawant dispensed with Atmaram’s services as Goa’s advocate before the Mhadei tribunal and other cases in the Supreme Court. Nadkarni’s nominee, Dattaprasad Lawande, has also been removed as advocate general of Goa and has been replaced by Devidas Pangam, a far more competent lawyer, purely on merit.
It is not only Atmaram Nadkarni who was been dropped. Many senior bureaucrats who were very close to Manohar Parrikar have also been dropped by Pramod Sawant. The treasure chest of the government was under the absolute control of a close confidant of Manohar Parrikar called Michael D’Souza, who was additional secretary in the Finance Ministry controlled by Parrikar. It was D’Souza who decided who will be paid how much from the incoming cash flow of the government. He held a very important position as the revenue of the government was far less than the expenditure. During Parrikar’s tenure because of the cash flow crisis due to the suspension of mining and the decline of tourism, the revenue had to be rationed. Which is where D’Souza came in, deciding which contractor should be paid how much and which newspaper advertising dues should be cleared.
It is presumed that Michael D’Souza operated on the orders of Manohar Parrikar. But there are many allegations that given the fact that Manohar Parrikar was suffering from pancreatic cancer for a year before he passed away on March 17, 2019, D’Souza could have done whatever he wanted to, under the cover of acting on behalf of the chief minister. D’Souza was among the first to be transferred from the key post of the financial controller of the government.

During Parrikar raj a few babus, both from the state and the Centre, called all the shots. Among the other confidants of Manohar Parrikar was Ameya Abhyankar who wore many hats, including special adviser to the CM and CEO, ESG. He is among the IAS babus who have been transferred back to the parent cadre and posted to Arunachal Pradesh. These transfers and sackings have been welcomed by the members of the Cabinet who used to keep complaining that babus did not listen to them.
It is possible that in the majority of cases the babus were justified because the demands of ministers are often illegal. But the fact remains that Parrikar trusted the officials more than his cabinet colleagues. And as long as Parrikar was alive he never let anyone, whether it was his ministers or officials, take any decisions.

Pramod Sawant does not make big promises like Parrikar used to. He is not interested in building fancy bridges like the new Mandovi bridge. Pramod Sawant does not have grandiose illusions or delusions. Pramod Sawant is down to earth. He has no great ambitions of being a superman like late Manohar Parrikar.
The first time I met him and heard him speak was at the 11th General Body Meeting of the Goa Chamber of commerce. I was surprised he looked so young, more like a young executive than the chief minister of Goa. When he spoke he was confidant and seemed to be in total control. Even the two other heavyweights Vishwajit Rane and Rohan Khaunte, (who was still IT minister then), clearly understood that Sawant was the boss.
In his budget speech or rather his financial statement in the monsoon session, Sawant was very clear on the priorities. He made it clear that his main concern was jobs and garbage. But he also made it clear that the government was in no position to offer jobs to the lakhs of Goans aspiring to a government job. He revealed that there were a maximum of 5,000 vacancies and that these would be filled entirely on merit. Sawant went to the extent of asking young people not to pay bribe money, even if someone claiming to be the CM’s agent demanded money. This must have been a big disappointment to his Cabinet colleagues who collected money on every government appointment.

Sawant stressed that the private sector had to play its role in providing employment to Goans. The problem is how to force them to provide jobs to Goans. And how to distinguish between Goans and outsiders as domicile certificates are available for sale at a price. Moreover most second and third generation migrants speak better Konkani than many locals. For upper class locals it is always been a matter of pride that they could speak Portuguese better than even English. During the Portuguese colonial regime Konkani was considered the language of the servants. The Portuguese suppressed Konkani and encouraged Marathi which is still the language of religion and culture for the majority of Hindu Goans.

It is a chicken and an egg story. Industries from outside which set up shop in Goa are not averse to giving jobs to Goans. In fact they would prefer to give jobs to Goans as they do not have to offer accommodation and other facilities. The problem is that in most areas Goans do not have the skills for the jobs available. For instance there is a boom in the IT industry with a number of people from outside Goa setting up startups in the state. A new trend has started of people from Delhi and Bangalore coming to Goa not to gamble but to take advantage of the incentives offered for the IT Industry by Goa.
Unfortunately, very few Goans are adequately trained in the specific skills required. Goa missed the IT bus when a large number of BPOs were set up in the 80s and the 90s. Manohar Parrikar was just not interested in promoting IT. I recall that when he was chief minister, his then IT Minister Ramakant Khalap had organized a major IT summit which was attended by all the top IT entrepreneurs. There was a dinner meant for the Chief Minister Parrikar to interact with the IT barons. Instead of coming for the dinner, Parrikar was busy supervising preparations for the first International Film Festival of India to be held in Goa.
No doubt Rohan Khaunte took a lot of initiatives in the field of IT. Already the objections to the proposed IT park in Merces have started becoming louder again. Though there are no logical reasons how it would affect the environmental in Merces. I have always suspected that the movement against the Merces IT park was promoted by Rudolf Fernandes and Company. There is no way an IT park is going to affect the so called lake which is more than a kilometre away. There is panic among IT professionals over the dismissal of Rohan Khaunte and the appointment of Jennifer Monserrate as the IT Minister.
I believe that there is nothing to fear as Jennifer is a quick learner and realizes that IT is the best choice for creating job opportunities for Goans. Her emphasis rightly is going to be on starting skilling night schools where existing employees can upgrade their skills and other young people can learn the skills that will be needed for the jobs in the future. We would be delighted to help her in any fashion that we can.