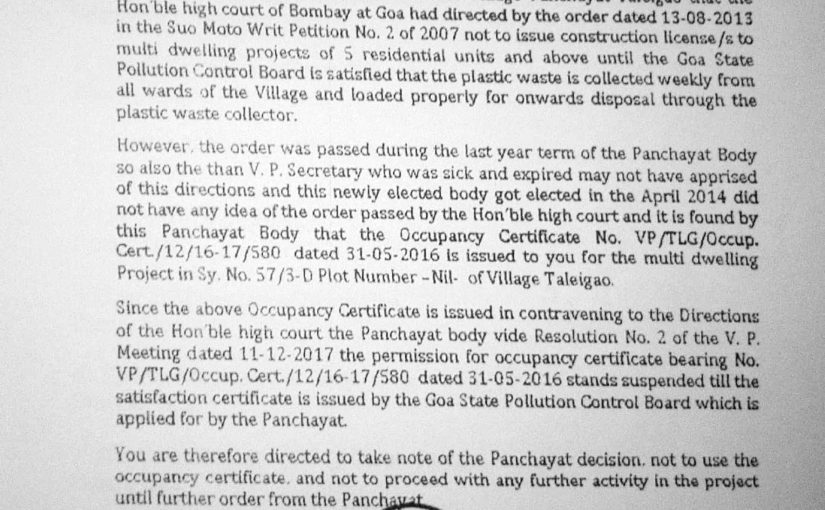 SUSPENDED: The Taleigao Panchayat has suspended construction licences, occupancy certificates and recommended the denial and cancellation of power connections to builders who have not implemented the directions of the High Court with respect to plastic waste

The Goa Bench of the Bombay High Court in a Suo Moto Writ Petition on the deteriorating garbage situation, directed many village panchayats, including Taleigao, not to issue construction licenses to multidwelling projects of five residential units and above until the Goa State Pollution Control Board (GSPCB) is satisfied that plastic waste is collected weekly from all wards of the village and loaded properly for onward disposal. The order was recently challenged by a builder before the High Court, but Justice Sonak declined to entertain their plea for revocation of the suspension, directing the builder to approach the director of panchayats. Non-compliance can result in contempt proceedings against the concerned Village Panchayat/s, hence all panchayats are taking this very seriously

If you are planning on buying a flat in Mandrem, Morjim, Taleigao, Benaulim, Varca, Colva, Majorda, Chicalim, Sancoale or Fatorpa, read carefully. The Goa Bench of the Bombay High Court, in an order passed in August 2013, made it compulsory that certain waste management guidelines be complied with before granting construction licences or occupancy certificates.
Below is an extract of the relevant judgment by Justice A P Lavande and Justice U V Bakre.
-*-

“ It is clarified that none of these applications shall be taken up nor any exemption from the earlier order would be granted unless the Pollution Control Board certifies that the municipal council has taken steps to comply with the MSW Rules, 2000 in case of municipal councils, and by the Panchayats under earlier directions of this Court.
Equally, as far as the Panchayat areas are concerned, if the panchayat has put up necessary facilities it is for them to get them certified through Pollution Control Board and unless they make a statement that they have so applied and the Board has inspected the facilities there is no question of considering any applications.”

(1) Establishment of Integrated Municipal Solid Waste Management Facility at Baiguinim Village, the work of which has been entrusted to the Goa State Industrial Development Corporation. The said facility would consist of :

(i) Treatment of wet/bio-degradable/organic waste;
(ii) Recycling Centre for dry/recyclables or sorted waste;
(iii) Landfill for disposal of inert material not more than 10% of the total waste;
(iv) Other miscellaneous common facilities comprising of weighbridges, administration building, roads, laboratory, etc.
The technology and layout of the plant has been planned in such a way so as to treat the source segregated waste. Corporation of the City of Panaji will evolve a model Municipal Solid Waste facility, operational in all seasons which would not create any environmental issues and would help in creating a world-class infrastructure facility for the residents of the region.
The plant has been designed to comply with the MSW Rules 2000. Though, presently, the integrated Municipal Solid Waste Managing Facility is being set up for the Corporation of the City of Panaji, at Baiguinim, the same will be extended to other Municipalities as well. The plan is to have three such garbage disposal facilities for treatment of garbage all over Goa, inasmuch as it is not feasible to have the garbage disposal for other Municipalities. However, the garbage will be collected from a common collection centre which would be notified and then taken to the plant for disposal.
The Government has also set up Monitoring-cum-Working Committee for the solid waste management under the chairmanship of the Minister for Environment to tackle the garbage issue and at present, the said Committee ensures that the garbage is collected from the State Highways and shortly, the garbage collection would be extended to all the Districts, Municipal and Panchayat Roads in the State of Goa.

(I) DIRECTIONS TO THE CORPORATION/ MUNICIPAL COUNCILS:-

(1) By way of final opportunity, the Corporation of the City of Panaji and the Municipal Councils of Mapusa, Ponda, Curchorem, Margao, Pedne, Sanguem and Valpoi are granted time of one year to complete the construction of landfills for the burial of residual/inert waste collected by the Corporation/ Municipalities.

(2) In so far as Mormugao Municipal Council is concerned, a Committee consisting of the following members is constituted to identify suitable site for setting up of landfill :
(a) Director of Municipal Administration;
(b) Chief Conservator of Forests;
(c) Chief Town Planner;
(d) Chairman of GSPCB;
(e) Member Secretary of Mormugao Planning and Development Authority;
(f) Chief Officer of Mormugao Municipal Council.
The Committee shall identify the site within a period of two months from today and the State Government shall take appropriate steps to acquire the land suggested by the committee and hand over possession of the acquired land to the Mormugao Municipal Council within a period of six months from the date of submission of the report by the Committee.

(3) The Mormugao Municipal Council will construct the landfill within one year from the date of handing over possession of the land to it by the State Government.

(4) The Corporation of the City of Panaji/Municipal Councils to ensure that the plastic waste that accumulates after segregation of the waste, shall be baled and stored at the Councils’ waste disposal site or at any site that may be selected by the State Government for plastic waste collection, until the agency appointed for the purpose collects the same.

(5) The Director of Municipal Administration shall appoint M/s. Good Earth Management Enterprises Pvt. Ltd., which has been appointed by the Director of Panchayats for collection of plastic waste from the Village Panchayats or any other agency approved by the GSPCB to collect the baled plastic waste from all Municipal Councils/Corporation, every fortnight for safe and hygienic disposal.

(6) By way of last opportunity, time of three months is granted to the Municipal Councils of Mapusa, Ponda, Curchorem, Margao, Sanguem and Valpoi to set up adequate composting facilities for disposal of organic/biodegradable waste to the satisfaction of the GSPCB.

(7) The Board shall inspect the facilities within one month thereafter and file a report in this Court, within two weeks thereafter, stating as to whether these Municipal Councils have taken measures for disposal of organic/biodegradable waste in terms of order dated 9th July, 2008 passed by this Court. The Board shall also send a copy of its inspection report to the concerned District Magistrate who shall consider it for taking appropriate action in accordance with the law in case of non-compliance of the directions by any Municipal Council.

(2) In case of non-compliance of direction No.(1), the Director of Panchayats shall report the same by filing appropriate application, so as to enable this Court to pass further orders, including initiation of contempt proceedings against the concerned Village Panchayat/s.

(3) By way of last opportunity, time of three months is granted to the Village Panchayats of Calangute, Candolim, Taleigao, Benaulim, Colva and Chicalim to make adequate composting facilities for disposal of organic/biodegradable waste to the satisfaction of the GSPCB.

(4) Within one month thereafter, the Board shall inspect the facilities and file report in this Court within a period of 15 days, stating therein as to whether these Village Panchayats are in full compliance with the order dated 18th February, 2009, passed by this Court regarding the steps to be taken for disposal of organic/biodegradable waste. The Board shall also send a copy of the report to the concerned District Magistrate who shall take appropriate action in accordance with law against the erring Village Panchayat/s.

(5) Considering the population and the fact that till date not many commercial activities are undertaken in the Village Panchayats of Querim-Tiracol, Paliem, Poinguinim, Loliem, Cola, Agonda, Naquerim, Fatorpa, and Quitol, they are exempted from setting up composting stations. However, the GSPCB shall carry out periodical inspections of these Village Panchayats and issue directions to them to set up composting stations if the Board is of the opinion that the composting stations are to be set up having regard to the mega housing projects and/or commercial establishments set up hereinafter in these villages.

(1) The State Government shall set up two or more sanitary landfills within a period of one year for accepting the residual/inert waste for Village Panchayats of North Goa and South Goa.

(2) The State Government shall consider setting up of a plastic waste disposal unit, having regard to the fact that on transportation of plastic waste out of Goa heavy expenditure has to be incurred.

(4) The Agency selected for collecting plastic waste shall maintain record of collection of baled plastic waste from the Municipalities and the Village Panchayats.

(5) The record shall be made available to the GSPCB, on demand. The Board shall designate Officer/Officers to inspect the records preferably once in three months to ensure that all coastal Village Panchayats are adhering to the directions given by this Court. If the Board finds that the Municipality or the Panchayat is not complying with the directions issued by this Court, the Board shall file a report to this Court in order to enable this Court to pass appropriate orders.