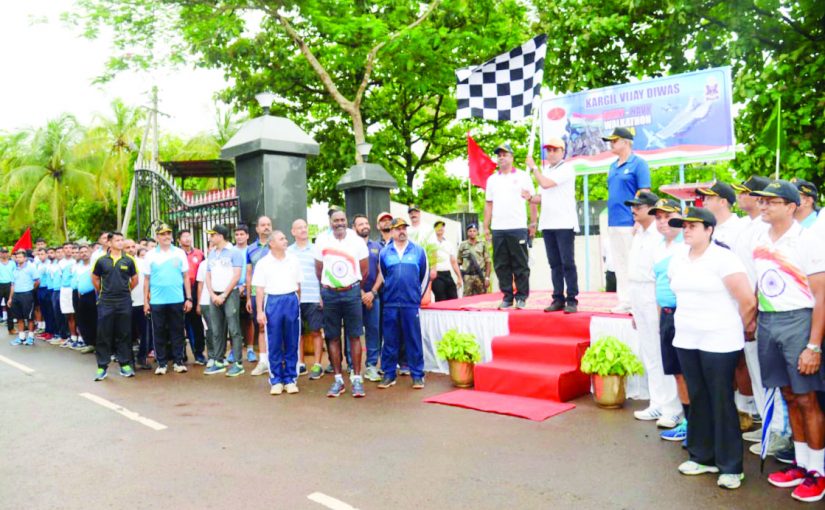 TRIBUTE: To commemorate the bravehearts of Op Vijay and the 20th anniversary of Kargil Vijay Diwas, a joint walkathon was organised by the Navy and Army at Bambolim. Approximately 500 personnel of the Indian Army and Navy participated. The participants gathered at the 2 Signal Training Centre, Bambolim and were given a brief about the significance of Kargil Vijay Diwas. Dr Pramod Sawant, the Hon’ble Chief Minister of Goa flagged off the event (pic above). Rear Admiral Philipose Pynumootil, the Flag Officer Commanding Goa Naval Area, Brig AK Sharma, Comdt 2 STC and other senior officers of Indian Navy and Army participated in the event. The participants covered a distance of 5 km, from Bambolim to Dr Shyama Prasad indoor stadium enthusiastically to spread awareness about the significance of this day. The Chief Minister complimented both the Navy and Army contingents for displaying patriotism, solidarity and jointmanship,which was truly exemplary for one and all to follow…

IT is very inappropriate and high-handed on the part of Chief Minister Pramod Sawant to be accusing NGOs of obstructing government work. In fact, in the current political scenario where the BJP overnight gobbled ten Congress MLAs including the Opposition leader, the role and vigilance by civil society becomes all the more necessary and vital.
Had it not been due to the watchfulness of citizens the abundant scams of the government over the years would not have come to light. If any NGO is violating the law the government is free to take appropriate action within the framework of the law.
While ruling politicians have been amassing crores Goa’s people are left with erratic power and water supply, polluted rivers and potholed roads across the state. This insensitive government has abdicated in its duty by not acting against Formalin-laced fish being sold. While power hungry MLAs have been shamelessly jumping across parties, governance is stalled and corruption is at its peak. Pramod Sawant is successfully carrying out Manohar Parrikar’s legacy of dishing out false assurance with dates and deadliness which will see endless U-turns and never be fulfilled.
When incompetent politicians run out of ideas it’s always easy to blame others. They are ever so ready to make excuses rather than applying maximum energy to get on with redressing the desperate and pressing needs of the people of Goa and the state. Blaming and using others as scape goats will not solve Goa’s problems.
— Aires Rodrigues, Ribandar

CONSULTANTS, CONTRACTORS MAKE MERRY!
RESIDENTS and visitors who contribute to thousands of footfall in the capital city may have been left on their own to face the pain of rain, but there’s one ilk of people whose spirits aren’t dampening: consultants and contractors.
Over the last couple of years nearly Rs100 crores have flowed out from the coffers of the Imagine Panaji Smart City Development Corporation Ltd and into accounts of consultants and contractors. Furnishing these details, Goa’s Urban Development Minister Milind Naik told the Goa Legislative Assembly in a written reply that the IPSCDCL, the special purpose vehicle floated by the State government to develop the capital city into one of India’s 40 smart cities, has thus far received Rs 191.20 crore in liquid funds – Rs 118.20 crore from the Central government and Rs 72 crore from the State government.
To whom has all the money gone and for what? The people are entitled to know in detail.
— Shared by Stephen Dias, D. Paula

OPEN LETTER TO CM SAWANT
Dear Sir,
Your recent efforts to tackle drug use in the state of Goa are appreciated …. if you are indeed serious about doing so.
Having lived in Goa for about 18 years, I have a very good understanding of how the “system” works there. In my opinion, instead of trying to tackle the problem in a “top-down” approach, which involves the difficult task of trying to locate the king-pins, you need to address this issue in a “bottom-up” manner.
I know for an absolute FACT that drugs in Goa are often distributed in and around beach areas by the Lamani community. Good examples of such activities can be found in the Anjuna / Vagator areas and the Morjim to Arambol stretch. Anyone in Goa looking for drugs know that these two areas in particular are prime drugs locations. In fact, it has been said in the past that Anjuna is one of the main drugs hubs of the whole of India, not just of Goa
Furthermore, I know for another FACT the Lamanis are in cahoots with the local police, to whom they have to pay a daily subscription to the local “collector”. So right there is your “nexus” that everyone has been speculating about. In addition, the Lamanis often rent properties from local Goans who are themselves involved in the supply chain. The Goan dealers use the Lamanis as “pushers”, for exactly the reason that they themselves have no need to get involved in the dirty-work. Also, in the unlikely event that a Lamani “pusher” is caught with drugs by the cops, the Goan “wholesaler” does not come into the picture at all.
The excuse given by the Lamanis that they are in Goa to sell clothes to tourists is BULLSHIT! They do not make any money selling clothes …. they make most of their money selling drugs! My simple suggestion is that the menace of Lamani “beach sellers” is once and for all eradicated. If you do this, you will soon see a decline in the supply of drugs.
So, with all that in mind, let’s see just how serious you are about tackling this problem.
Send all the Lamani’s back home …. and watch many of Goa’s problems simply disappear!
Best of luck.
(P.S. If you are indeed serious about tackling the drugs menace in your Goa, then why do you not push for the use of drugs sniffer dogs in your state? Drugs dogs do not tell lies …. and they do not take bribes!!)
— David N. Cleaver, UK