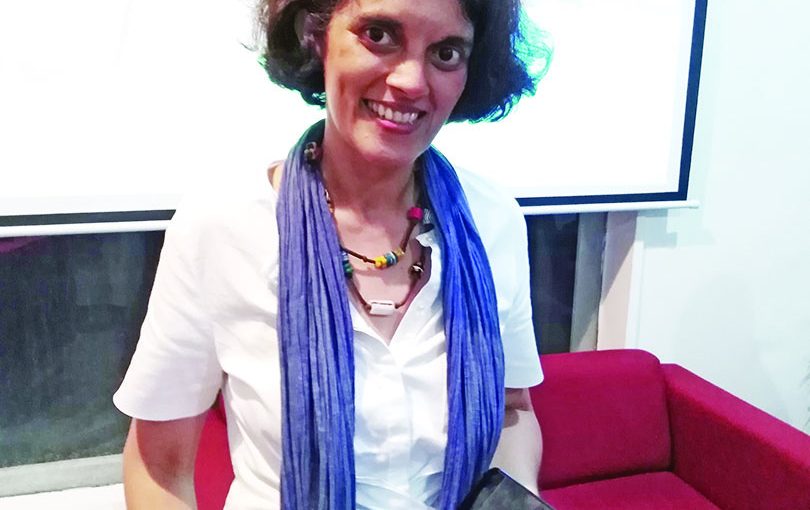 FOR us today, my dears, I think we need to stay in touch with history and learn from it continuously. The other day I was at the lovely old world building facing the ferry wharf where the offices of the Camoes-Centro de Lingua Portuguesa are located (a great place to watch the rain fall and sweep across the river Mandovi where the dowager casinos rock away).
This time the occasion was to listen to the very petite, expressive and charming Dr Angela Barreto Xavier painting a picture of the Europe of old which was not Europe but kingdoms trying to get even with one another for the sake of slaves, gold, cloves, nutmeg, black pepper and all the other goodies of the old Spice Islands of Mollucus located a vast unchartered Pacific ocean. Europe wasn’t like what it is now, a union. With vivacious happiness Dr Angela detailed how the monarchies of old in Portugal and Spain and other neighboring kingdoms operated on marriages, treaties and exchange of their colonies…and in all this what is the real term achievement of the historic voyages of sea adventurers like Cristovao Colombo, Vasco da Gama, Fernao de Magalhaes?
Much reading up research later she has come to the conclusion that these sea adventurers of Portugal and Spain played a significant role in maritime expansion of the Iberians and the overseas territories they would rule to become rich and famous. With the help of a painstaking put together slide show she filled in a picture of what kind of times we are talking about now – she has done intensive interpretation of the period between 1497 (beginning of the voyage of Vasco da Gama) and 1522 (end of the trip of Magellan) and come to the conclusion that her sympathies are with Magellan who was the more valiant and courageous adventurer who tried to reach India via the Pacific ocean and in the process died in the Philipines (for helping out in local warfare)!
Of the five ships which had left Spain only one returned and the seamen who returned had many nice things to say about him, in comparison to Vasco da Gama who falls far short …after all he took the better known route around the Cape of Good Hope with much guidance to make it to India and further east to Malacca and so gave a fillip to the ongoing slave, gold, spice trade of those times which fuelled European economies.
Indeed, the story of 14th, 15th and 16th century Europe which saw the rise of overseas colonial ambitions of Portugal and Spain competing with other European powers, is enthralling! It was the “Age of Discoveries” and Europe then is a story of kingdoms trying to outrival each other in the opportunities of creating wealth with the opening of new maritime route and other worlds….and the seamen who gambled with their lives were not above selling themselves to the highest bidder or the king who patronized them the most. If Vasco da Gama was loyal to the king of Portugal, Magellan sold himself to the more generous 18-year-old King Charles of Spain…of course, for furthering the cause of colonial empires across the oceans.
WHEN you set out to navigate seas and oceans in those days you never knew who would return. I couldn’t help smiling because Dr Angela Barreto Xavier was so passionate for the cause of better recognition of Fernao de Magalhaes who sailed some 20 years after Vasco da Gama and took the totally uncharted sea route via the Pacific ocean via south America to find India (which he never did find remember after floundering in the Philippines) …why is it, she asked, there are so many tributes, monuments, museums, institutions in Vasco da Gama’s name and very little for Magalhaes? In her eyes Magalhaes or Magallan is the bigger, braver, nicer hero and she doesn’t care if some “think I should be thrown in the fire for saying all these things…like Sati in India!”
I would agree with Dr Angela Barreto Xavier and must say her presentation made the dynamics of Portuguese and Spanish history of the 14th/15th centuries in Europe really come alive …one gets the idea of how wealth was created along with organized civilization for the European powers of old when there was hardly any national loyalties or they changed with the death and rise of kings and their kith and kin. Never mind that wealth was created courtesy the exploitation of trading in slaves, gold and spices (especially cloves, nutmeg, mace, said Dr Angela) and when the realization dawned that it was not Christopher Columbas (or Cristovao Colombo) who discovered “India” but America …perspectives changed. Spain beat Portugal in colonizing Mexico and later Peru and acquired a lot of gold, silver (and diamonds?)…one of these read up Adam Smith’s “The Wealth of Nations” to find out more about how our white, Caucasian, Roman nations created a new world of wealth to go on to become the first nations of our times, it’s fascinating saga to chew a bit or a lot on.

I ASKED Angela out of curiosity where did all the hundreds of tons of spices collected by European traders go and she smiled, in confectionary mostly perhaps and in those days few thought about having a bath twice a day in Europe! So possible some spices went towards products catering to covering up personal hygiene and keep infections at bay. Of course a lot has changed in Europe today, she hastened to add.
This is to say Dr Angela Barreto Xavier is conducting a course titled “The Government of Difference in the Portuguese Empire (15th to 18th centuries) for post-graduate students, but also open to the general public if anyone is interested. Check out Goa University website if you want to go listen. Incidentally, she is a Margao-born and bred girl. I must say I always enjoy my visits to the Camoes-Centro de Lingua Portuguesa in Panaji , it’s a restful place equipped with library and research room and these magnificent terraces…but a pity I wasn’t born and educated in Portuguese time Goa, or I’d know some smattering of Portuguese! I dare say in Goa it’s useful to know some Portuguese.
EVER BEEN TO THE ‘CUSTOMS & INDIRECT TAXES MUSEUM’?
IT’S a mouthful of a name for a museum and I’m wondering why they don’t simply make it to the Blue House Customs Museum? Just a thought. You must know the 400 years old heritage building of the Customs House at Ferry Wharf in Panaji converted into a museum some 10 years ago. I’d visited the old Customs offices years ago in the 70s and remember what a grand feeling it was to step into its historic past. In the old days too it was grand but not quite as interesting as it is today as a museum!
This is to say they were celebrating the museum’s 10th anniversary and Vasa Seshagiri Rao (chief commissioner, Pune Zone) who was down as chief guest has promised a grander celebration later on. The old Customs building has finally been restored and “museumed.” After the formal function one walked around to get a feel of the museum.
Several past and present bigwigs of the Customs, GSD, Police departments were present and Mr V Seshagiri Rao was all praise with the manner in which the museum had come up since its inauguration by President Mukherjee on July 25, 2009. The building is all of 419 years now and after the Portuguese who built it and used it left, it continued as Customs department offices till 2003. By which time of course in keeping with most of our government offices it had deteriorated badly and the offices moved elsewhere… some more years elapsed before work at restoration of the building commenced and converted into a museum.
Going by what was said at the function Panaji’s Blue House Customs Museum has been doing well with lots of students coming in to pick up information. According to K Anpazhakan and Manish Chaudhuri who’re in-charge, there’s a footfall of some 7,000 annually. Apart from the collection of confiscated treasures on view in the galleries, they have more bulk reserves tucked away in safe keeping…until proper arrangements can be made to put them on display!
Hey, it’s makes for some amusing insight into the life and times of Customs department folk as you walk around and see how many adventures they’ve had nabbing smugglers and their smuggled goods in and out of the country – from gold to diamonds to antiques to drugs. At the tea-party which followed someone quipped “smugglers are great artistes, some pieces of art smuggled have history and legend behind them!” For the stories ask K Anpazhakan or Manish Chaudhury who’re in charge of the museum’s upkeep.
Apart from the antique exhibits there’s some naval history here too in the recreation of the ancient Lothal port in Gujarat; and there’s a tableau of an airport….amongst the footwear exhibits it was eye-opening to see the clever cavities made in shoes to tuck diamonds and gold biscuits. One couple tried to smuggle diamonds in a walking stick and they got caught…the real stick is on exhibit, the string of diamonds are dummy diamonds naturally.
Walk on and see the coinage of old, various sculptures of bronze, an intriguing compass of old from ships of old, much more. I don’t know why salt should be taxed but it’s always been taxed! There’s a taxation chart up somewhere and I queried a Mr Mulgaonkar next to me about taxes, he educated, “we have direct taxes which are usually progressive, while indirect taxes are regressive and we hope at some point can be done away with better systems.”
There’re quite a few women in Customs officers nowadays and I said hello to Priscilla Fernandes (superintendent of customs), who advised I return for a longer and more rewarding visit to the museum. Good idea. Museums are perfect places to acquire a perspective of time past, present and future! One of these days take your biwi-bache or friends and make time to visit the Blue House Customs Museum of Panaji in Goa. I’m going to call it the Blue House Customs Museum anyway.
ON that note it’s avjo, poiteverem, selamat datang, au revoir, arrivedecci and vachun yeta here for now.