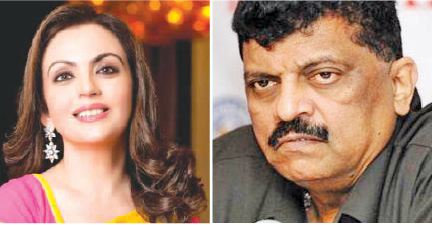 DESTROYER: Nita Ambani is chairperson of the Football Sports Development Ltd, that operates the Indian Super League in which FC Goa competes. The ISL has killed local football clubs like the famous Dempo and Sporting football clubs of Goa, and damaged famous clubs like East Bengal and Mohan Bagen in Kolkata

There was a time when of the top 20 football playing clubs in India, Goa accounted for the top five. Goan teams like Salgaocars, Dempos and Churchill Bros won the Santosh Trophy and the I-League any number of times. But they are all closing down because the All India Football Federation has sold football to the Mukesh Ambani family. You can now play in the top league only if you have very deep pockets.

Last week, six I-League sides wrote to Prime Minister Narendra Modi and FIFA president Gianni Infantino, seeking their help in the clubs’ ‘fight for survival.’ They weren’t indulging in mindless hyperbole. Their future is, in fact, that precarious.
In the last decade, more clubs have either shut shop or scaled down their operations than those who have entered, or stayed in, the top division. Thirty clubs have competed in the I-League since its inception. Of them, 20 have either pulled down the shutters or reduced their operations to an extent that they’ve stopped being relevant. And the fate of the 10 ‘remainers’ is unknown, especially after the AIFF decided to make Indian Super League (ISL) the country’s premier domestic competition.
Here’s the mess in a nutshell: The AIFF rebranded the National Football League in 2007, jazzed it up a bit and relaunched it as I-League, hoping that it would lift its sagging fortunes. In 2010, AIFF signed a 15-year deal with IMG-Reliance worth Rs 700 crore. But in bargain, they gave IMG-R the right to either rebrand the I-League or start a new league altogether. Claiming that it was tough to repackage I-League, IMG-R chose the latter option and thus the ISL was born in 2014. As per the agreement with AIFF, ISL will now become the premier league without promotion and relegation, while I-League will become second division. I-League clubs claim they were kept in dark about this deal between AIFF and their commercial partners and hence are protesting the proposed ‘takeover.’
And their battle to stay relevant is ironic because I-League has never been more spread out than it is at the moment. In its early years, the league was primarily restricted to just three cities/states: Kolkata, Goa, Mumbai. Today, it has spread to various corners — from Kashmir to Kerala to Mizoram, promoting local talent in each of these places. But it is also true that in its traditional hubs like Maharashtra and Goa, club football is on a life support at the moment.

The reasons for this are many. AFC’s stringent club licensing criteria forced several teams out of the top division. Miffed, some of them decided to withdraw from the national scene altogether. It can also be argued that the clubs have brought this upon themselves — had they done their bit professionally from the beginning, you wouldn’t need ISL and perhaps, we would’ve all have been spared of this saga.
But most of all, it is tough to overlook the federation’s fault. They have failed to create an ecosystem in which clubs can thrive. You can call it I-League or ISL; you can have a closed league with 10 teams or one with promotion and relegation that has 20 teams. But the hurdles will remain the same and the future will continue to be bleak. We’ve seen it with the erstwhile National Football League, which gave way for I-League after existing for a decade. And we are witnessing it again, as I-League makes way for ISL. Some of the ISL clubs are already feeling the heat, with multiple change in ownerships and reports of Pune City shutting shop and Delhi Dynamos moving to a new home.
Interventions from FIFA or PMO might draw attention on the plight of the clubs across the country. But it will do little in changing the scenario at ground level. It is ultimately for the AIFF to get its house in order.

Ludhiana
nJCT, nMinerva Punjab
The only state in North India to have some kind of football culture, Punjab’s contribution to Indian football is often very understated. Perhaps because apart from JCT, one of India’s finest clubs, there were few who took the sport seriously. After they shut shop in 2011 citing lack of popularity as a reason, club football drifted into oblivion in the region. JCT’s void was filled years later by Minerva Punjab. Both teams made Ludhiana their base (Minerva later played in Panchkula) but matches were often played in front of empty stands. Minerva won the league last year. But now, the owners are reportedly planning to sell a part of the club to raise funds and keep it afloat.

Mumbai
nMahindra United, nMumbai FC, nAir India, nONGC,
nMumbai City FC
It’s here that the first telltale signs of trouble in domestic football emerged a decade ago when Mahindra United decided to pull the plug for not getting a desirable return on investment. Their departure had a domino effect. Mumbai FC were next to scrap their team while Air India and ONGC too became defunct after not being able to comply with club licensing criteria. Within five years, Mumbai went from being home to four top division clubs in I-League to having none. Mumbai City, who compete in ISL, too are struggling to generate buzz.

Pune
nPune FC, nBharat FC, nDSK Shivajians, nPune City
Unlike the clubs from Mumbai — who did little to market themselves — Pune FC were among the first to bring a semblance of professionalism in Indian club football. From having a proper youth system — India is still benefitting from it — to a web channel and merchandising, Pune were trendsetters in a lot of things. But the city never really warmed up to the club despite the team constantly punching above its weight, Pune FC’s growth stagnated and the owners eventually ran out of patience before deciding to shut shop. The other I-League teams from here — Bharat FC and DSK Shivajians — have met the same fate while ISL side Pune City, too, are on the verge of relocating to Hyderabad, according to several reports.

Goa
nDempo, nSalgaocar, nSporting Clube de Goa, nVasco, nChurchill Brothers, nFC Goa
While the locals completely cold-shouldered successful I-League clubs, they’ve welcomed ISL side FC Goa with open arms — so much so that fans slept outside the stadium to be first in the queue when match tickets went on sale. FC Goa continues to do well as the rest of Goa struggles. The mining ban from 2013 to 2016 severely dented the finances of most clubs. Ultimately, all these clubs withdrew from the I-League — except Churchill — and drastically scaled down their operations. They, though, blamed AIFF’s ‘lack of vision’ for this.

Bengaluru
nHAL, nBengaluru FC
Bangalore never really warmed up to HAL, who made just one appearance in the league in 2011-12. After JSW won the bid to field a team from Bangalore, the landscape changed. They’ve set the bar so high that few teams are able to match them in terms of professionalism as well as results. Bengaluru have now moved to ISL, realising I-League’s bleak future. But even the country’s best-run club isn’t without problems — they are currently in the middle of a complicated battle with the state government over their ground. With no immediate resolution in sight, it remains to be seen if they too are forced to look for a new home.

Kolkata
nMohun Bagan, nEast Bengal, nMohd Sporting, nUnited SC,
nPailan Arrows, nATK
The fabled maidans replete with stories of mismanagement and arbitrariness. The Saradha chit fund scam, along with financial troubles of other sponsors, left most of the clubs cash-strapped as they could not develop a self-sustaining revenue model despite existing for 100 years and having millions of supporters. The fact that the AIFF and its partners haven’t figured out a way to include the country’s two biggest teams, Mohun Bagan and East Bengal, in the proposed premier division sums up the entire mess Indian football finds itself in.

Kozhikode
nViva Kerala, nGokulam Kerala, nKerala Blasters
Despite Kerala’s infinite appetite for football, the state has never had a stable representation in the country’s top tier. Viva Kerala came, got relegated, resurfaced with a new name (Chirag United Club Kerala) and disappeared forever without anyone actually noticing them. Gokulam Kerala made their debut in the 2017-18 season and are still around. But their impact, at least in terms of footfall at the stadium, isn’t half as much as Kerala Blasters, the ISL side that used to attract more than 60,000 fans per match until the season before last.

Chennai/Coimbatore
nChennai City, nChennaiyin
Another club that took the corporate entry route to the I-League, the reigning champions are only the second club from the state to play in the top division (Indian Bank competed in the National Football League). They made I-League debut in 2017, made Coimbatore their home instead of Chennai and have gradually progressed since then. Chennai won the league last season and also attracted investment from Swiss club FC Basel. Chennaiyin, too, have been growing steadily and won the ISL last year. The two teams have done well to revive football in the state.

Imphal
nNeroca FC
It’s ironic that the state that has been a traditional stronghold had to wait till 2017 to get its first I-League team. Neroca qualified for the top tier after winning the second division in 2016 and have grown remarkably in the two years, largely because of the abundant local talent. They managed a top-five finish in the I-League last season. However, because of the uncertainty over the league’s status, the club is considering to cut its budget and focus on grooming under-23 players instead.

Meghalaya
nShillong Lajong, nRoyal Wahingdoh, nRangdajied United
Meghalaya was one of the first success stories to emerge out of North East when Shillong Lajong qualified for the I-League. But the state was also among the first to face the brunt of, what the club called, AIFF’s poor planning. Royal Wahingdoh’s owners were quick to realise that ISL would take over as India’s top league and pulled out of I-League in 2015-16. Rangdajied, who played in the 2013-14 I-League, were expelled by the AIFF for not adhering to the licensing criteria. Shillong Lajong, one of the strongest and stable clubs to emerge from the region, are focussing only on the youth players after realising that I-League clubs have no place in the top division, if the AIFF and their commercial partners have their way.

Sikkim
nUnited Sikkim
Co-owned by former India captain Baichung Bhutia, United Sikkim provided a platform to the players from the region to compete at the highest level. Within a short period, they won the second division and qualified for I-League. However, citing the league’s dim future, the club slashed its operations and competed only in the local league to save costs.

Heartland
In two decades of organised club football, there has been no representation from some of the most populous regions, including Uttar Pradesh, Haryana, Bihar, Chhattisgarh, Madhya Pradesh, Rajasthan, Gujarat and Andhra Pradesh. The fact that Delhi or Hyderabad, despite its rich football culture, has not had its own team in the NFL or I-League speaks volumes of lack of proper structure in this region, which has stunted the sport’s growth. With the ISL, there has been an attempt to penetrate into some of these regions. But in Delhi, Dynamos have struggled to create a following and are considering to move out. Jamshedpur, home of one of India’s biggest football nurseries, got its first league team a couple of years ago and they seem to have attracted some followers. But the majority of the region is still going unrepresented.