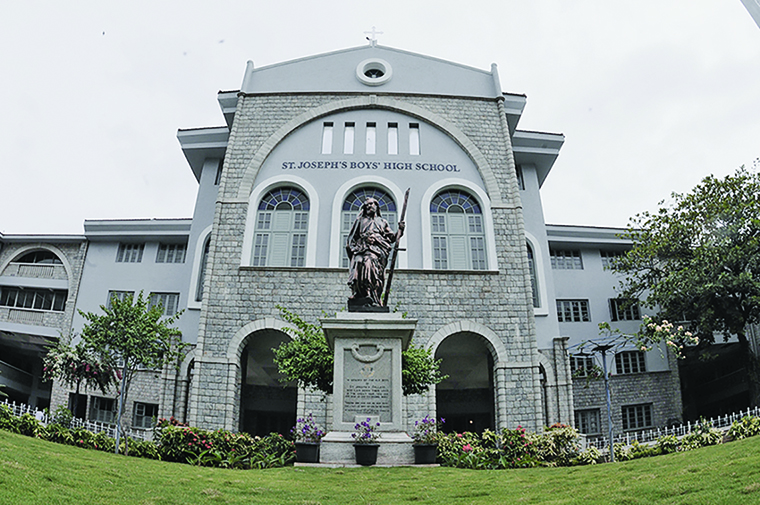 St Joseph’s Boys’ High School in Bangalore has been regarded as premier institution in Bangalore for as long as one can remember. The school has a glorious history stretching back 161 years, founded by the Missions Etrangeres de Paris (‘French Fathers’) in 1858. By the year 1875, the college (as schools were known at that time) had 144 students, of which 64 were boarders and 80 day scholars. In the year 1910, the institution adopted the High School Examination System and became known as St Joseph’s European High School (SJEHS). The school grew to 239 boarders and 183 day scholars in 1913. The World War I memorial was constructed in the school to honour students who sacrificed their lives, and now honours martyrs of World War II and other wars, a unique memorial in a school, very rare, indeed.
In the year 1937, the missionaries of Missions Etrangeres de Paris (MEP) handed over the management of the institution to the Society of Jesuits. In the year 1968 the school was renamed St Joseph’s Boys’ High School (SJBHS). The ISC curriculum was introduced in 2007 and girls were admitted into Std 11 & 12 to study Commerce and Science subjects. Significant growth has happened over the past 50 years in particular, and SJBHS has grown from 700 students in the 1960s to 3,500 in 2019, and from 30 staff in the 1960s to 150 staff in 2019. The school continues to be inclusive and admits students across sections of society.
The alumni of SJBHS, Bangalore formed their association in the early part of the 20th century, but World War I broke out and close to 400 of the old boys were commissioned to fight in battles across the world. The surviving boys returned when the war ended in 1918.
The First General Meeting of the Old Boys’ Association (OBA) was held in September 1919 with 32 members present. Today, members of the OBA meet across several continents — Asia, Australia, the Middle East and North America. In India, the OBA is headquartered in Bangalore, with Chapters at Coorg, Goa, Kerala and New Delhi. The OBA celebrated its Centenary Year in 2018, when the Hundredth Annual General Meeting (AGM) was held. The activities of the OBA are closely aligned with the welfare of staff and students of SJBHS.
The OBA is a dynamic group focused on giving back to its Alma Mater in several ways to assist students and staff. The OBA actively promotes camaraderie among Josephites around the world which enables them to renew their bonds and give back to their alma mater. The tradition of sports and games have always been a strong element of the all-round development of Josephites. OBA reunions feature games such as badminton, cricket, football, golf, hockey, snooker and squash which enable Josephites around the world to connect several times every year. Old Boys have made a mark in several spheres of life around the world.
The OBA drives several initiatives including Academic Scholarships & Prizes, Sports Scholarships & Prizes, Mid-day Meal Program for needy students, Staff Medical & Accident Insurance, extra-curricular development of students including cultural and leadership skills, and Career guidance for students. The OBA has played a significant role in the construction of the new school building, and they have also built the unique Loyola Sports Complex which is a multi-purpose sports facility. Besides offering sports scholarships and prizes to current students, the OBA honours Old Boys who have represented the country in international sporting events including the Olympics and World Cups across diverse disciplines such as athletics, badminton, basketball, cricket, hockey, motorsports, sailing, swimming and others. With strong emphasis on all round development, SJBHS takes pride in the fact that they have had ten Olympians, and Indian captains in badminton, cricket and hockey.
Notable Josephites include Rahul Dravid, Robin Uthappa, Sadanand Vishwanath (Cricket), Vece Paes, Albert Shaw, Anil Aldrin, Sandeep Somesh (Hockey), Hakimuddin, Rehan Poncha (Swimming), Thomas Cup Captain Anup Sridhar (Badminton), C S Santosh (Motorcycle rallyist), Sabeer Bhatia (founder of Hotmail), Ben Gomes (VP, Google), Thomas Kurian (VP, Google), George Kurian (CEO, NetApp), six Indian Army Major Generals (retired and serving), a retired Vice Chief of Air Staff, J Y Pillay (former president of Singapore), Rajeev Gowda (MP), Irfan Razack (entrepreneurs), Nikhil Chinappa (VJ), Paul Fernandes, K Raghava (artists), Dr Kartik Chandran, Dr Rahul Sarpeshkar (scientists), three prestigious Rhodes Scholars – Dr Christopher Mathias, Nandan Kamath, Dr Sudhir Krishnaswamy, and others from other disciplines.
In May this year, the OBA conducted a poignant Memorial Service to pay tributes to four men in uniform who laid down their lives while serving in the Indo-China war, Sri Lanka operations, Siachen Glacier and Kashmir front. OBA Day is celebrated on the first Sunday of September every year. The OBA takes great pride in the achievements and contributions of Josephites, and honours them on this day.
The school motto, is ‘Fide et Labore’ or ‘Faith and Toil’.