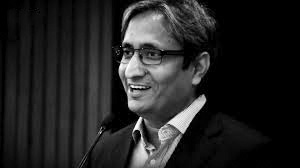 The following is an English translation of a speech by the 2019 Ramon Magsaysay Award winner, Indian journalist Ravish Kumar, at The Wire Dialogues, in New Delhi on February 24, 2019

Note: The National Handicapped Finance & Development Corporation (NHFDC) has been set up by the Ministry of Social Justice & Empowerment (Government of India). It is a registered company under Section 25 of the Companies Act, 1956, and is not for profit company wholly owned by the Government of India. It has an authorized share capital of Rs400 crore. NHFDC is the apex institution channelizing funds to persons with disabilities through State channelizing agencies nominated by State governments.

IT is an irony how much money there is for mind-blowing entertainment and holidays abroad in this country! But precious little to cater to the needs of children of a lesser god or so to speak. Goa’s senior most school for special children (many of whom have grown up into adults now), the Panaji-based Disha School for Special Children, announced on July 27, 2019, its year-long silver jubilee celebration of programs to focus on how important it is for parents to give their children with any disability an early start in life — so that they can do better for themselves in adjusting in normal society.
Speaking at a press conference to unroll the charter of programs commencing immediately right up to the first week of April next year to commemorate World Autism Day, Disha School trustees Anil Khaunte (chairperson), Anand Madgavkar (president), Sandhya Kalokhe (manager) and Rehana Haroon (treasurer) explained to media people how a better infrastructure of professionals and technology can improve the chances of children with physical, intellectual, learning and other disabilities, to do much better for themselves.
Alas, so dismal is the situation, says Sandhya Kalokhe that 25 years later Disha is still in search of land to put up a proper building to offer their 78 children (50% for day care) an assurance of shelter lifelong or as and when needed, “One builder did tell us if we could find the land he would build the building for free!”
So far the school has been functioning from premises which are more like a make-do shelter and here they also have their training workshops. In Goa there are about 30 government recognized schools taking care of children with disabilities and a certain percentage are severely disabled students who will need shelter as they grow older and upon losing their parents/parent would be left bereft and homeless.
Some kind of a hostel equipped with caretaking infrastructure is required for those growing into their 40s and 50s so that they may be aided to cope with their disabilities as also geriatric problems. There are several government subsidies, educational and training schemes, but none offer shelter of an enduring kind for the specific needs of older disabled adults. So during their silver jubilee year the Disha Charitable Trust has chalked up several programs to highlight the needs and issues of children with special disabilities, starting with their curtain raiser which took place on July 29, 2019, when goals and aspirations were spelt out and a cake cut amidst staff, students and well-wishers of the school.
Silver jubilee celebration year programs coming up include a boat cruise outing for Disha family members to understand the problems of parents and reach out to them to create a bonding; a drawing competition for all intellectually disabled students on Oct 1, followed by an exhibition of products made by them (greeting cards, bags, rakhi assortment, etc). An appeal has gone out to the public to please buy the handicrafts created by their students to inspire them and give them a sense of joy and independence. The products will be showcased on October 11, 12 and 13.
Then there is a street play coming up for World Disability Day on November 30, an education tour for special educators, a sports meet, a workshop for special educators from all over Goa (conducted by professional faculty Ms Dharaitri Krishnamurthy from Kathalaya in Pune (this entails a storytelling strategy to help the students). Then will come World Syndrome Day when a walkathon will focus on Downs Syndrome; there will be a panel discussion with experts in the field of disability and the need for early intervention, education and rehabilitation for the intellectually challenged.
According to Sandhya Kalokhe, the sad picture at ground level is that most parents to this day who suspect early signs of disability in children tend to keep them at home, fearing for their safety if they go out. The message must reach parents of disadvantaged children that there is much that is positive they can do for their children, especially between the ages of zero to seven years of age which it is generally accepted by educationists as maximum learning period. Early intervention can improve the future of even those afflicted by genetic-based disabilities.
Like autism , cerebral palsy, multiple disease, with spinal damage….today there are specially trained therapists for all kinds of disabilities including speech disability; and also psychologists and counselors who can help children and parents to better cope and manage, “but parents are reluctant to bring their children out!”