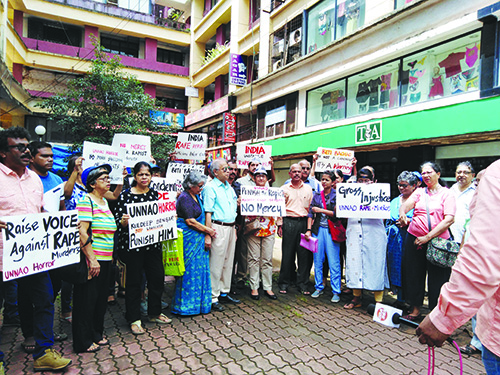 GOA AAM AADMI PARTY PROTESTS UNNAO RAPE: How safe are women in India? It’s a question worth asking given BJP MLAs cavalier attitude in the context of recent Unnao rape case indicting BJP MLA Sengar, as also previous rape cases. Goa AAP protested outside the BJP offices at Navelcar building in Panaji on Aug 1, 2019. Several AAP leaders including Valmiki Naik, Pradeep Padgaonkar, Patricia Fernandes, Lumina Almeida, Cecille Rodrigues called on the BJP to respect its own slogan of `Beti Bachao, Beti Padhao!’ Also in the pic are eminent senior citizens Lata and Arvind Bhatikar of Goa Suraksha Manch but standing by AAP on the matter of women’s safety in BJP’s India, “We do not like what is happening in our country today,” said Arvind Bhatikar (who is first IAS officer from Goa and former chairperson of MPT)

THE open letter to the CM in Goan Observer (July 27, 2919) from a foreign tourist clearly shows that the Lamanis make money only from drugs and not selling fruits and trinkets. Ban them, he says, and drugs menace will dwindle. He erred on one point though. Lamani and Kashmiri are two special status categories in Goa who are never arrested in Goa! Foreigners from various countries, locals and Indians from other states, yes, but not them. It is the Lamanis who having grown economically through the illegal drug trade who are now buying protection through buying politicians, not the other way round. They now want legitimacy and are demanding government jobs! Ministers now want to buy land in Kashmir! Certain ‘businesses’ are profitable indeed! So who is responsible? The Goan who does not want to do menial jobs: This is the biggest crime, bigger than pushing drugs to school kids.
— R Fernandes, Margao

VISWAJIT, DON’T INSULT GOAN TAXI DRIVERS!
TAXI drivers may not be following the norms of the government but they need to be counselled and a time frame set for them to adopt the rules. They are Goans and Viswajit Rane has no right to insult them the way he has been doing. He is doing this to support the CM to get sympathy from him so that he gets away with anything he plans for the GMC without taking doctors in confidence. He thinks Goa is a dictatorship by his behaviour with senior doctors and ex-dean Pradip Naik on clinical trials exercise. I think Goa needs a new health minister.
— Stephen Dias, D. Paula

MOVE TO PORVORIM!
Despite the Goa Government Secretariat having moved to Porvorim, the State flag hoisting functions continue at the Old Secretariat in Panaji.
In public interest, the Goa government should hold the Independence Day flag-hoisting function at the Secretariat in Porvorim instead of inconveniencing the public by holding it opposite the busy Old Secretariat at Panaji. On every Independence Day the road opposite the Old Secretariat in Panaji is closed for traffic and unnecessary inconvenience is caused to the aam aadmi. It is most improper to close a very busy public road when there is an alternative and far more appropriate venue.
Along with the Independence Day flag hoisting, the Republic and Liberation Day functions should also be held at the Porvorim Secretariat. It would be good for security reasons too. Besides, in every State such functions are always held at the Government Secretariat. Why should it be any different in Goa? The National flag is a symbol of the nation’s and state’s pride and must be respectfully hoisted with all those present standing to attention and facing the flag and those in uniform rendering the appropriate salute. Surely, the best place to provide the respect on behalf of the people of the state must be the Secretariat which represents the office of state that administers the affairs of the state on behalf of the people.
The government should also contemplate having only one State function in a place of honour and the seat of government where the significance of the day should be honoured, instead of making a mockery of the auspicious days by having functions all over the place. The Goa government should also ensure that the expenditure on this, and all other government functions, is kept to the bare minimum. It is hoped that Chief Minister Pramod Sawant will look into the issue.
May this Independence Day function be held at the Secretariat in Porvorim to ensure that the public in Panaji are not inconvenienced and because due respect must be provided to our national flag on behalf of all the people in a place that houses the representatives and government of the people.
— Aires Rodrigues, Ribandar

EAT RIGHT, LIVE LONG!
OUR body sustains itself in a sublime state if all the organs; the pituitary (which is the conductor of the endocrine orchestra), the brain, the eyes, the nose, the ears, the heart, the skin, the lungs, the respiratory track, the digestive season, the liver, the kidneys, the pancreas, the blood stream, the thyroid, the prostate, the gonads and the blood stream work in vibrant harmonious synchronicity which can be attained with disciplined living, restraint and most importantly physical exertion, positive thinking, inculcating virtues and healthy eating and drinking, minimizing inebriating alcoholic drinks and fine tuning all bodily functions in such a manner that our immune system is robust, combating disease-causing viruses and bacteria so as to act as a powerful deterrent that transcends weakness and promotes healthy functions by the streamlining of our blood vessels, the arteries and the veins to supply oxygen to all parts of the body in a robust harmony of all the organs working in tandem.
Control of our nervous system is an important requirement. Our medicine should be the nutritious food and drink that naturally prevent life style diseases, like diabetes, cancers, blood pressure etc. Nature cure through healthy eating and drinking coupled with moderation could be the best way to prevent all disease. Control in diet, positive auto suggestion and healthy habits is the key to a healthy life devoid of disease. Respect your body and enjoy a vibrant and serene life to the fullest extent, abounding in vibrant vigour.
— Elvidio Miranda, Panaji

THANKS BABUSH!
AS I went home around 6-6:30 pm on Thursday, August 8, after a day of heavy rains, I was pleasantly surprised to see the Miramar-Dona Paula bypass road was not flooded.
Unfortunately this is rare enough that I had to write about it, but all thanks to Babush or whoever has done whatever was required to solve the flooding issue there. Long may it last.
— Blaise Dias, Panaji