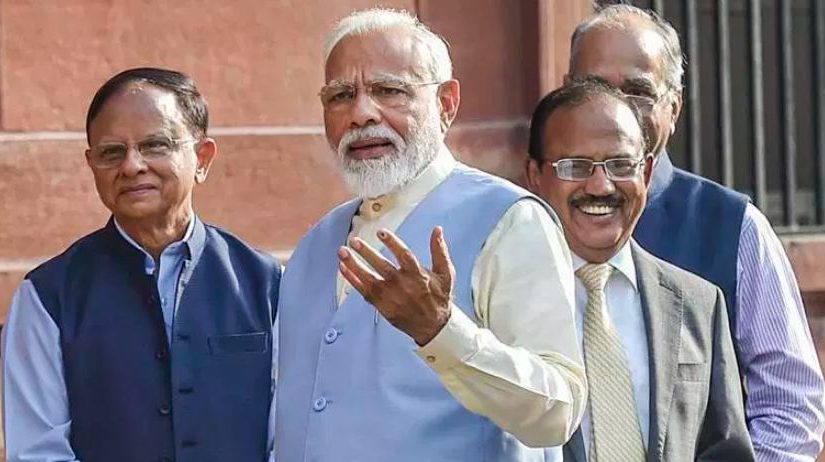 MODI: Although the 2014 elections were about hoping the government would wave a wand and make life better, jobs more available and reduce corruption, the failure of most of the government’s promises did nothing to reduce the personal belief and loyalty to Modi that seems to drive many voters

Pranab Bardhan, a professor of graduate school at the department of economics, University of California, Berkeley, shares his perspective on the BJP’s victory in the elections earlier this year— concluding that a majority of the Indian electorate seem to be buying into a false narrative of nationalism

Narendra Modi’s stunning victory in the recent general elections is no doubt a great personal achievement for a leader whose oratorical and political skills (often tinged with a bit of venom) are indeed impressive and matched by indefatigable energy.
Of course, he has been helped by disproportionately large corporate donations that gave him a megaphone to drown other voices, by a largely supine media that, apart from allowing him to escape hard questioning, became used to blowing his trumpet, by a fragmentary Opposition with immature leadership, by an army of volunteers canvassing both door-to-door and via WhatsApp, and, of course, a last-stage unexpected gift from Masood Azhar in the form of a terrorist incident to “boldly” respond to. But all this is not enough to fully explain the victory that Indian voters have handed him.
These are early days to carry out a full analysis of the electoral data for deciphering the range of explanatory factors, but there are enough straws in the wind to venture some guesses. First, it is unlikely that the economic achievements of the Modi regime played much of a role, and it is not a coincidence that the ruling party campaigns, particularly in periods of apparent desperation, did not much emphasise them either. Some did talk about toilets (though the actual use of those toilets lagged far behind their bureaucratic targets of construction) and gas cylinders for the poor (though evidence suggests refills of those cylinders lagged far behind their initial acquisition), but their impact on voting behaviour was likely to have been marginal (as suggested by the opinion polls by mid-February). One, of course, did not hear much about the slaying of the dragon of corruption through demonetisation, the grand hoax of November 2016. The stories of agrarian distress, which led to the hurried start of the PM-KISAN scheme, did not melt away and with the current state of land records, the two-hectare limit in the scheme must have been a block in implementation in large parts of the country. The other economic concern about the lack of good jobs for young people remained uppermost in many a mind, a promise of 2014 obviously belied.
People often talked about Modi’s incorruptibility, but the same was true of Manmohan Singh, the leader of a regime associated with corruption scandals. Corruption is not necessarily associated with dynastic politics. Even if it were, the latter is not completely absent in the ruling party (a significant fraction of its MPs are “dynasts”), and its NDA partners. More importantly, there is only a thin line between public corruption and crony capitalism which has been rampant in both UPA and NDA regimes. Besides, in India’s system of highly secretive election funding — made murkier by electoral bonds — a party far ahead of others in benefiting from that system cannot deny complicity.

GAP BETWEEN ILLUSION AND REALITY

There have been many accounts of young people telling press reporters that they may not have jobs, but Modi has ensured that India is respected in the league of nations: Undoubtedly, this has been important to many voters. This kind of preening nationalism is based on a deep inferiority complex, that the rest of the world does not give us enough respect.
Many people abroad have not been much impressed by India’s actions in the Balakot airstrike, and, many in India are unaware that India’s reputation abroad has substantially declined as well in several respects under the Modi regime. India used to be respected for its pluralism and democracy.
In the widely-cited report of the Economist Intelligence Unit on the State of Democracy in the World for 2018, India’s rank declined sharply in just four years since 2014.
The lynchings of Muslims, atrocities on Dalits, the assault on some universities by goons and politicians, the repression of dissent, and the prominence given by the regime to Hindu supremacists (like Yogi Adityanath or Pragya Thakur) have brought us disgrace in the civilised world. Politicians pontificating on plastic surgery or test-tube babies by ancient Hindus, or rants against evolution or the cancer-curing properties of cow urine, have made us a laughing stock in the world. Yet, in our echo-chambers, there will be non-stop hype about the Modi regime raising our national prestige.
Yes, nationalism can have a positive role in unifying people and transcending internecine group conflicts, but the kind of ethnic pseudo-nationalism that the RSS/BJP propagates is highly divisive, not unifying. If it is really the case that, as some people believe, Modi’s appeal can cut across castes and regions, and therefore is a positive step for India, then this nationalism has to transcend majoritarian ethnicity. It has to be, instead, a kind of “constitutional nationalism”, based on our constitutional values and norms.
Modi once called the Constitution his “holy book”, but that has been mere empty rhetoric; in reality he has connived with his party members and associates, frequently violating the Constitution in letter and spirit. Majoritarianism is not democracy — I don’t like the oxymoronic term “illiberal democracy”, used by many people, from Fareed Zakaria to Viktor Orban, as this ignores in some sense the essence of democracy.
Effectively turning nearly 200 million people in our country into intimidated, second-class citizens is a violation of that constitutional nationalism, however impressive Modi’s electoral victory may be. Concentration of power in one person, intimidation of critics and dissenters, weakening of institutions of checks and balances and misuse of police, bureaucracy, tax and investigative agencies against political opponents, are all gross violations of the Constitution which can put the world’s largest democracy to shame.
If the victory in 2014 was partly based on false hope, then that of 2019 seems based on false pride.