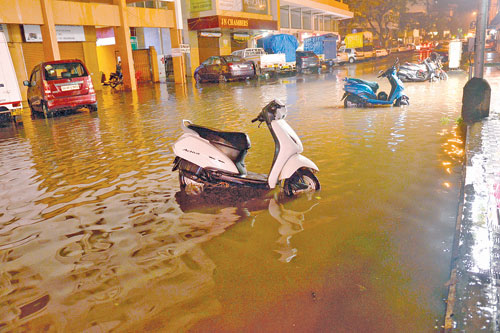 SHOPPING: The premier shopping hub of Panjim, 18th June road was repeatedly flooded with water entering shops and damaging lakhs worth of goods

Over the last three decades or more, successive governments have been tampering with nature. Successive government have been permitting construction within the no development zones as in the case of Aldeia-de-Goa. Successive government have been permitting cutting of hills for creating gated colonies like the Tata gated colony in Verem. Successive governments have been reclaiming the sea illegally to built multi story structures and roads like the Miramar-Dona Paula bypass road.
In the Legislative Assembly on Thursday, Digambar Kamat revealed that permission had been given for building a 25-storey tower in Panjim city. Successive governments have been permitting the loot of river sand for construction purposes. Successive governments have been choking waterways like the St Inez Creek and even allowing illegal construction along its banks. Successive government have been building more and more dams without putting in place a proper drainage system. Successive governments have been systematically destroying the eco system of Goa.
Which is why during the ten days of torrential rains, Goa almost drowned. Nature struck back with great fury, both from the sky and the sea. Whenever there was heavy continuous rain which coincided with the high tide the coastal areas of Goa, including Panjim, got drowned.
Nature does not discriminate between rich and poor. The flooding of Goa affected the residents of Mala who had to shift from their ground floor residences. When the prolonged heavy rains coincided with the high tide, the commercial lifeline of Panjim — 18th June road — got flooded and water entered several shops not just once, but on several occasions during the last few days. There have been multiple instances of trees falling down on luxury cars in the capital city Panjim. One of the roads in the Aldeia-de-Goa complex collapsed sparking fears that the entire complex would come tumbling down.
Several villages particularly in North Goa like St. Estevam Rivora and parts of Sattari Taluka were flooded. Walls have collapsed when giant trees have come crashing down on them in Mapusa. The residents of Sal village had to be evacuated as the Chapora River burst its banks and flooded the city. In Canacona the Chapoli dam was over flowing. In Sanquelim there was panic when the water resources department opened all the four gates of the over flowing Anjunem dam. Indeed all the dams in the state have started over flowing posing a threat to the villagers on the banks.
Forget about air crafts, even two-wheelers may not take off from Mopa as it got flooded with the fire brigade having to rescue six members of a family. We do not know if the floods are due to the mass slaughter of trees without the permission of the forest department. Or whether the environmental assessment report mentions the fact that the Mopa plateau, on which the airport has been built, is prone to flooding.
The late Chief Minister Parrikar’s soul must be screaming as the approach road to the Atal Setu Bridge, in which he took too much pride, got flooded. It was suggested that perhaps the new Chief Minister should built another bridge to provide access to the bridge in the sky, the Atal Sethu.

There is another aspect of the precarious location of Goa and the state of its economy that the flooding is exposed. The heavy rains have not been confined to Goa and have damaged roads in Karnataka and Maharashtra also. Both the Chorla and Amboli Ghats are blocked with access to Belgaum completely stopped. So on the eve of Eid which falls on Monday, if the wet weather continues there will be no Qurbani in Goa. Already all the outlets selling meat, let alone beef, have shut down because they have not received fresh supplies from Belgaum for the last three days.
It has now been revealed that the bulk of the milk supplied by Goa Dairy comes from Kolhapur. There is a desperate shortage of milk as Kolhapur is flooded and no milk has been coming from outside the State. Restaurants have switch to black tea and black coffee. Even the Nescafé coffee is served black. May be all the coffee outlets are mourning for Siddhartha, the founder of the Café Coffee Day chain.
Vegetable markets are also empty. Except for potatoes and onions no vegetables are available forcing many restaurants to change their menu or close down. We might fight with Maharashtra and Karnataka over the diversion of Mhadei waters. But only when we are faced with the climatic fury that we witnessed last week do we realise how much we are all dependent on each other. Particularly Goa, which gets not only the bulk of its vegetables but even dal, rice and cooking oil from outside the State.
The only product that Goa generates in greater and greater abandon are gated colonies and high rise buildings. Unfortunately you cannot eat them. And the fools who bought flats in them are realizing that Goa is not quite the paradise they thought it was.

When villages and cities get flooded there is collateral damage. Wendell Rodricks sent a message to the Power Minister Nilesh Cabral about how the Colvale village had been deprived of power for more than 16 hours. He shared the reply he got while appreciating Cabral’s response. Cabral sent him a photograph showing the transformers at the Colvale power station in chest deep water and asking for patience as safety was more important.
We need not tell our readers what happens when live high tension wires coming to contact with water. As it is there is a desperate shortage of linesmen. Moreover they don’t even have basic equipment like gloves and ladders. On several occasions we have lent our ladder to linesmen. So among the first casualties of heavy rains and flooding is power supply.
The impact on Goa is even worse because it is dependent on the northern grid which passes through flooded Kolhapur and the southern grid which comes from north Karnataka which is equally flooded. Pumps at reservoirs like the Opa and Selaulim Water Works which supply water to North Goa and South Goa, need power to operate the filtration plants and their pumps. Whenever there is a breakdown in power supply to the pumping stations you will have a shortage of water. Which is why the amount of water that you are receiving has reduced rather than increased despite the sight of water all around. It is the case of water water everywhere, but not a drop to drink.
Everyday there is a fresh announcement of restricted water supply, the latest caused by a landslide at the Chorla ghat due to release of water from the Tillari dam from which a canal supplies water to the Asnora treatment plant. There is a Facebook joke going around saying six people were arrested in a flat in Panjim for singing “Yere Yere Pausa Tula Deto Paisa” (come come rains, we’ll give you money). Excepting the Goa government is bankrupt and maybe the rains have been prolonged because they gave khota (fake) paise to contractors building dams and even roads.
Wide cracks have appeared even in roads which were laid in the recent past. Apart from power and water shortage there is a threat to even the archeological treasures of Goa as the museum in Patto is flooded. Builders and land sharks will be happy as the records of land ownership kept in the office of the Town & Country Planning officer is located in a flooded area. When nature decided to strike back it is does not spare anyone. The other major threat is the outbreak of malarial diseases like dengue, falciparum malaria, etc. This is because the water remains stagnant in the roads for hours as drainage systems are choked.
The climate that Goa witnessed last week was a man-made tragedy. It was an avoidable tragedy. Once upon a time when the St Inez Creek was not choked, the water drained from the Nagali hills into the river Mandovi near the sports complex in Campal.
Similarly in other parts of Goa also there were drainage channels for water to flow into water bodies. Historically, the rule which was incorporated in the 2001 Regional Plan was that the height of a building should not be higher than a coconut tree which was nine metres.
Even now the TCP act controls construction on slopes and hill cutting is severely restricted. The present disaster is because the TCP never enforced these rules.
The latest tragedy waiting to happen is the huge township coming up on the Kadamba Plateau. Construction of high rise gated colonies has been permitted even though the Power and Water Supply Department have established their inability to provide the new buildings with essential requirement. The buildings on the Kadamba plateau which include those constructed by Pandurang Madkaikar, near the site of the Baiganim waste management plant, still do not get Muncipal water and are entirely dependent on tankers. During the recent floods even access to the flats was cut off. Never mind the damage to thousands of cars which were virtually drowned in the flooded waters. Which provoked the Chief Minister to repeatedly warn citizens to stay in their houses and not to take their cars out. It was a forced holiday not only for children but for adults too, including those who have luxury cars.

We may not be able to completely reverse the situation. But we can certainly stop it from getting worse. Panjim cannot be smart unless the St Inez Creek-turned-nullah is completely desilted and the buildings that have encroached on its banks are demolished. We can minimize future calamities by freezing any further construction in Panjim city and reverting the FAR to nine metres. We should stop cutting hills as has happened at the Kadamba plateau and Vasco. We should build canals so that if dams overflow there will be an outlet. We should ensure that critical departments like Archeology and Town & Country Planning should build on high ground. In short we should go back to the Portuguese style of planning, where all the important buildings were in Altinho which means hills in Portuguese. Bunds should not be allowed to be destroyed. We cannot afford to bulldoze the sand dunes. No construction should be permitted within 200 metres of the high tide line.
We must always remember that we are caught between two very harsh forces. The high tide which reaches Himalayans proportions during the monsoons and the sky which can send down huge quantities of rain continuously as we witnessed last week.
All of this is the result of climate change. Even as the temperatures dropped with the heavy rains in Goa, it rose to 52 Celsius in London where the temperature usually never goes beyond 20 degrees. All of us need to protect our natural resources and return to nature to save ourselves and our planet. Unless you can afford the coast of settling on the moon!