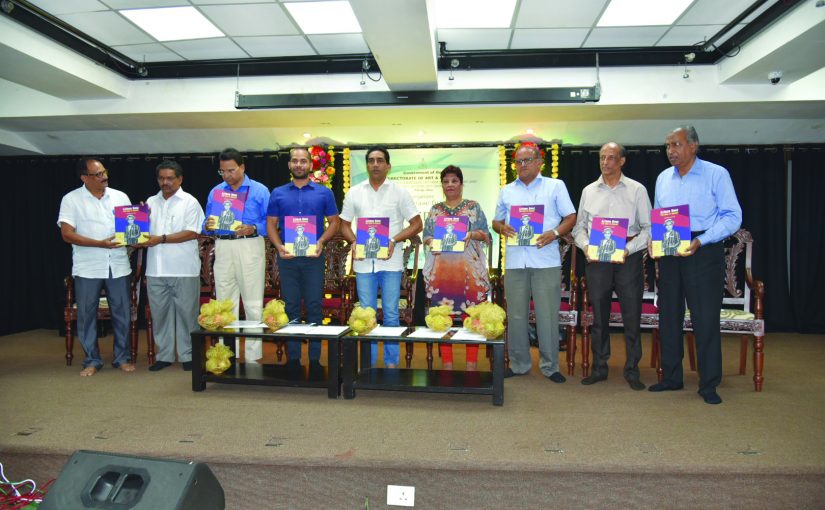 ALFRED ROSE, THE KING OF MELODY: Speaking at the release of Isidore Dantas’ book “Alfred Rose, The King of Melody”, based on famous Goan tiatrist and Konkani singer, the Late Alfred Rose, at a function at Sanskruti Bhavan, Patto-Panaji on Wednesday, Minister for Art and Culture Govind Gaude discussed how tiatr is an effective medium for public awakening and preserving Goan identity. The Minister assured that the Directorate would re-start giving financial assistance to artistes, which had been stopped, by September-end. Mapusa MLA Joshua D’ Souza, said that he was privileged to know Alfred Rose through his father’s (former Deputy Chief Minister of Goa, the late Francis D’Souza) affection for Alfred Rose and his work. Both he and the Art and Culture minister spoke of requests from the public to name an auditorium in the upcoming Ravindra Bhavan in Mapusa after the late Alfred Rose, and promised to look into it. Rita Rose, widow of the late Alfred Rose, remembering her husband said, “I am happy that he lives in the hearts of Goans. His songs have a profound meaning.” Also present on the dais was special invitee, Adv Aires Rodrigues, who recalled his memories with late Alfred Rose. Former speaker of Goa Legislative Assembly, Tomazinho Cardozo, briefly highlighted the contents of the book, while the author of the book, Isidore Dantas, spoke about his journey of writing the book. Also present were Director of Art & Culture, Gurudas Pilarnekar, Secretary for Art and Culture, Chokha Ram Garg, IAS, and Deputy Director of the Directorate of Art and Culture, Ashok Parab

MISERY ON ALL FRONTS

Dailies today spew out misery on all fronts: not restricted to the over 10 days water shortage in Tiswadi. However, one headline was heart wrenching! It was,’ Pipeline restoration brings joy to Cumbarjua, Marcela Locals’! How sad! Joy is when one recovers from a serious ailment, gets a job in todays ‘no jobs scenario’, wins a competition, gets a seat in MBBS etc. Joy, because a pipeline is repaired in 10 days?!! This is sad! To the credit of the locals: by exclaiming for joy, they showed they harboured no ill towards those responsible for their predicament! There needs to be no other reason for granting Special Status to Goa!
This brings out another incident in this water crisis: that of an IAS Officer emptying the entire tanker load into his overhead tank, while the surrounding people were struggling to get a few buckets. That he was able to use the services of the Fire Brigade??! in itself is preposterous- also meaning he could get any amount of tankers anytime. Surely, he could have shared the water — which was not purchased by him, in the first place — with the others? No, he made sure he alone would have water for 10 days! It is not that drinking water was not available or even that no water could be got for washing with a fee — in his case free. The problem is: rotten apples spoil the good ones: not vice versa! Again, we need special status!
First: Sonsoddo fire, then no collection of garbage, next floods, pot holed roads, now this: what next? All this shows that our Govt can only do firefighting — that too with a miserable efficiency: no planning. The only planning done is how to acquire land from locals and gift it — with bonus rivers — to favoured businessmen and vote banks! And how to blackmail the opposition into silence! In fact, this tactic of blackmailing of politicians, has now been exported to the Centre. For the first time, Goa sends out abhorring characteristics to the Centre: otherwise it was always the reverse! Ex-Finance Minister is in CBI custody. Social Media reports he was grilled on how to get the economy back on track! Blackmail?
— R Fernandes, Margao

GOVT FAILING ON ALL FRONTS
The Goa government cannot abdicate in its bounden duty to at least provide the citizens their basic needs. Uninterrupted power and water supply besides good roads are the least we are all entitled too.
With the basic infrastructure of the State in the dumps we are left with dry taps and frequent power outages. The roads across Goa are in a precarious and very despicable state. The Government has publicly assured the people that all the roads across the State would be restored before the ensuing Ganesh Chaturthi. But with just over a week to go for the festive season this assurance is set to be another hoax.
With rampant construction in the fields, the displaced cattle have moved on to the roads. The state is infested with stray dogs all over, with them having invaded even the runway of our Airport. A very sordid state of affairs. It’s time the government gets its act together as people’s patience is running out with a government that has been failing and faltering on all fronts..
— Aires Rodrigues, Ribandar

GOD SAVE GOA FROM THE PWD!
PANJIM is rejoicing at receiving water apparently, but it has still not reached Dona Paula where I live. I drag a big tub outside hoping it’ll rain. Then I try logging in to upaygoa to pay my water bill as usual. (Yes, I see the irony.) The site, which worked well over the last year or so, directs me to https://goaonline.gov.in where — believe it or not — I’m told my consumer number does not exist! So someone somewhere decided to stop users using something that actually works without testing the alternative! And I’m sure got paid very well for their pathetic work.
Can someone save us from the inefficiencies of the PWD?
— C Dias, D. Paula

FAREWELL PERCIVAL
GOA’S most celebrated and multi-tasking bureaucrat Percival Noronha passed away on August 19, 2019. He was 96. Many in Goa considered Percival as a living encyclopaedia who had answers for all their queries especially the youth. A strict disciplinarian Percival even before he breathed his last was a very dexterous nonagenarian who was loved by one and all.
He extensively lectured in Portugal, Spain, Italy and France as well as in Macau and Japan. Percival was instrumental in setting up the Friends of Astronomy Association as well as initiated the Carnival floats parade in Goa.
Amongst his many awards, the most cherished ones were the United Nations Peace Medal in 1972, the Ordem do Merito Comendador, Portugal’s highest civilian honor and the Clube Militar de Macau medal. He maintained almost a library of books on every subject, which were referred to by many friends of his, both young and old.
Percival appreciated Jack de Sequeira and Dayanand Bandodkar as his favorite politicians of Goa, and was all praise for Manohar Parrikar as a later day politician. In particular, Percival used to eulogize India’s Padma Bhushan awardee Dr Jose Pereira who he used to call as a genius.
Goa has lost a very loved, talented, devoted and dedicated bureaucrat and friend who was always ready to lend a helping hand to those in need. May his soul rest in eternal peace
— Elvidio Miranda, Panaji