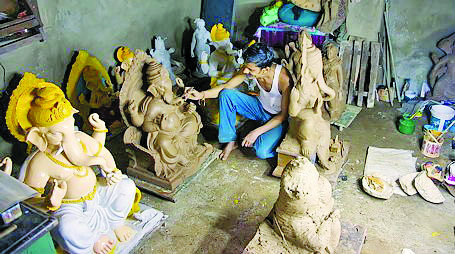 TRADITION: The village of Pen, two hours south of Mumbai, is where the majority of Ganesh idols are crafted. The idol-making industry in Pen has been going on for more than a century and is huge, with most people from the village involved in process. Around 150,000 idol makers work in more than 550 factories to produce 600,000-700,000 Ganesh statues a year, with a turnover of about 10 crore rupees (more than $1.5 million). Over one quarter of the statues are exported

This festival is intrinsically connected to India’s freedom struggle.
While Ganesh Chaturthi has been celebrated in Indian homes from time immemorial, it was Lokmanya Tilak who made this festival a public celebration. In 1893 he organized the first public Ganesh Chaturthi in order to create unity and awareness about the freedom struggle among the masses. Since then, it has become a hugely popular public festival while continuing to be a private family occasion as well.
1857 was a landmark year for India and more so in the context of Indian freedom. It was the year of Sepoy Mutiny, an armed rebellion against the ruling British Empire by the Indian soldiers. This was the first war that India waged to gain back her independence from her white rulers.
Though unsuccessful, this battle marked the beginning of the Indian struggle for independence. Many orators, leaders and freedom fighters all over India teamed to put up a united resistance to the British domination. Greatly esteemed by the Indian people, especially of Maharashtra, Tilak was commonly referred to as “Lokmanya” or “he who is regarded by the people”. It was Tilak, who brought back the tradition of Ganesh Chaturthi and reshaped the annual Ganesh festival from private family celebrations into a grand public event.
Tilak saw how Lord Ganesha was worshipped by the upper section as well as the rank and file of India. The visionary in him realized the cultural importance of this deity and he popularised Ganesha Chaturthi as a National Festival. He did it with gaiety to bridge the gap between the Brahmins and the non-Brahmins and he found an appropriate context in which to build a new grassroots unity between them. He brought unity between the two layers of society as he recognized that it was the need of the hour to fight against the British in Maharashtra. He knew that India couldn’t fight her rulers until she solved the differences within her own. Hence, to unite all social classes Tilak chose Ganesha as a rallying point for Indian protest against British rule because of his wide appeal as “the god for Everyman”.
It was around 1893, during the budding stages of Indian nationalism, that Tilak began to organize the Ganesh Utsav as a social and religious function. He was the first to put in large public images of Ganesha in pavilions and establish the tradition of their immersion on the tenth day. The festival facilitated community participation and involvement in the form of learned discourses, dance dramas, poetry recital, musical concerts, debates, etc. It served as a meeting place for common people of all castes and communities, at a time when all social and political gatherings were forbidden by the British Empire for fear of conspiracies to be hatched against them. An important festival during the Peshwa era, Ganesha Chaturthi acquired at this time a more organized form all over India largely due to Lokmanya’s efforts.
Since then, Ganesh Chaturthi has been celebrated throughout Maharashtra as also in other states with great community enthusiasm and participation. With the independence of India in 1947, it was proclaimed to be a national festival.

Today, Ganesh Chaturthi is celebrated in the states of Maharashtra, Tamil Nadu, Karnataka and Andhra Pradesh, Rajasthan, Bihar and many other parts of India. The festival is elaborately celebrated and the preparations begin months in advance. Days before the actual worship, homes are cleaned and marquees erected at street corners to house the idols of the Lord. Elaborate arrangements are made for lighting, decoration, mirrors and flowers.
The artisans who make the idols of Ganesh compete with each other to make bigger and better sculptures. The sizes of the relatively larger ones range anywhere from 10 meters to 30 meters in height. During the festival days, the Lord is worshipped with great devotion and prayer services are performed daily. The duration of the Lord’s stay varies from place to place; once the worship is complete, the statues are carried on decorated floats to be immersed in the sea after one, three, five, seven and ten days. Thousands of processions come together on the beaches to immerse the holy idols in the sea.
It is being celebrated with enthusiasm by Indians staying in the US, France, Dubai, Germany, Australia, UK and several other countries. The aartis, dhol-tasha performances and cultural programmes have brought together friends and families staying abroad. Lord Ganesh is most worshipped God by the Hindus and he is most adored one. He is called ‘Vighnaharta’ meaning he removes all obstacles and allows success in all endeavours.
May the blessings of Sri Ganesha always be upon you all! May He remove all the obstacles that stand in your path! May He give on you all material prosperity as well as liberation!