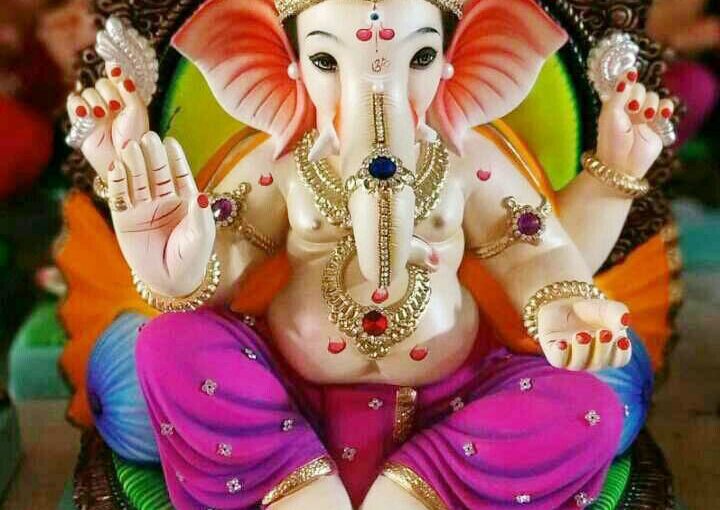 ECO FRIENDLY: The most significant feature of the manner in which Chovoth is celebrated in Goa is the canopy of green called the matoli.

Lord Ganesh is most eco-friendly since traditionally the image is made of clay. But the most symbolic green message comes from the matoli — the canopy under which Lord Ganesh sits — which consists of dozens or hundreds of vegetables, leaves, herbs and the bounty of nature. Since Lord Ganesh is born at the end of the monsoon there is no shortage of greens to offer to the jolly elephant-headed, pot-bellied remover of all obstacles…

Lord Ganesh is essentially a Dravidian god. Or perhaps provides the vital link between the North and the South. In North India the main festivals are Diwali, Dussehra and in some parts, Krishna Jayanti. In the Konkan region however the precedence is given not to the festival of lights which marks the beginning of the new year for the businessman in the North or Dussehra, but Chovoth, as the Ganesh festival is called.
Legend goes that Parvathi was having a bath and had asked her son by Lord Shiva to guard against any peeping toms. Shiva, historically considered an Aryan god from Persia or most specifically present-day Afghanistan, came back early and insisted on entry. The steadfast Ganesh refuse to allow Shiva to enter the house where Parvathi was bathing. In great fury Shiva is reported to have cut off the head of his son Ganesh. Realizing what he had done he offered to compensate Parvathi. He found an elephant wandering close by and chopped off his head and placed it on the neck of his child.
It is this charming myth that provoked Prime Minister Narendra Modi to claim that Hindus were experts at transplants even in ancient times. Modi cited the example of the transplantation of an elephant head on the headless body of Shiva and Parvathi’s son Ganesh. This would qualify whoever did the operation to be a plastic surgeon as well as a neurosurgeon, given the new look the transplant gave Lord Ganesh!
In the Konkan region Ganesh Chaturthi is always considered a family affair. It is an occasion when all members of the extended family from Kashmir to Kanyakumari and even the US and UK come together to spend 10 days in the ancestral house.
Even today the tradition continues with a hundred or more brothers, nephews, sisters, brother-in-laws and cousins spread across three or more generations, getting together in the family house. They just do not visit the family house but they stay in the family house for the entire period.
In more recent times because of lack of time, various families have cut down the length of Ganesh’s stay in the house to seven or five days. What distinguishes the Konkan Ganesh Chaturthi from the celebration in other parts of the country is the matoli. The matoli is a canopy of literally dozens if not hundreds of vegetables and herbs which form the temporary home of Lord Ganesh. It is the matoli which stresses the eco-friendly nature of Lord Ganesh. In no other part of the country or in any festival is there such an abundance of fresh greens as you will find around Lord Ganesh. If you want to see the forest of green which is harvested for Lord Ganesh you only have to visit the Banastarim Bazaar which stocks the entire range of matoli items. It would be even more fun and an education in botany for children to go into the forest to collect matoli items themselves.
Ganesh Chovoth became a people’s festival or a mass festival particularly in Maharashtra due to the efforts of Lokmanya Tilak who was not only a great nationalist but the mentor of Mahatma Gandhi. When Gandhi came back from South Africa, Tilak is reported to have told him to travel throughout the country so that he would know his country first before he joined the freedom struggle. Which is why Gandhi travel by third class like ordinary citizens right from Mumbai to Kolkata stopping a various places at his way.
Unfortunately Tilak, like Patel, has been co-opted by the RSS though he was a truly secular individual. The idea of using Lord Ganesh to protest against the British Colonial regime came to him because of the ban on public rallies by the British. Tilak rightly judged that the British would not interfere with religious gathering. That is how the concept of Sarvajanik Ganesh came up, where entire communities used to buy a mega Ganesh and worship it along with song and dance and of course slogans and political speeches against the British colonial regime.

Even after Independence the tradition continued. The significant part of sarvajanik Ganesh was that it was celebrated by all — Hindus Muslims and Catholics — as it was more of a political statement when it was started.
While Pune started the concept of the sarvajanik Ganesh the biggest and the tallest Ganesh and the one which attracts the largest crowd is the Lalbagh Ganesh in Mumbai. Real life film stars compete with politicians to offer aarti or worship at the Lalbagh Ganesh which was originally the area of Bombay where the maximum number of textile mills were set up. The textile mill industry is now of course dead and Lalbagh has become upper Worli, a very fashionable rival to Churchgate and Nariman Point.
There are many special attributes of Lord Ganesh. Among the many titles that he bears is the “Remover of all Obstacles”. Which is why on every auspicious occasion and every new venture the name of Lord Ganesh is invoked. The other gods have to wait in line till Lord Ganesh has been propitiated.
There is something very charming about Lord Ganesh ranging from his elephant head complete with tusk and trunk and his potbelly. Ganesh likes the good things of life. Ganesh did not believe in fasting or watching his weight. Lord Ganesh’s chariot is proof of the humility of Ganesh. Unlike other gods who chose tigers and eagles, Lord Ganesh rides on a small, cute vehicle or vahan — a mouse (Mushak)
The first day of the Ganesh celebration marking his birthday is always on a moonless night. There is a story behind this. The moon is reported to have laughed at Ganesh when he fell off his vahan, the mouse. Ganesh was so angry that he is reported to have cursed the moon and told her that she should not appear during his birth. I do not know if this is the reason the Chandrayaan-2 mission is planning to drop the moon lander on the moon on a moonless day.

There are many temples in Goa dedicated to the mother goddess. However, in Goa she is not in the avatar that you see in the West Bengal or more specifically in Kolkata — the blood thirsty revenge full mother goddess.
In Goa for historical reasons — possibly due to the clashes between the Saraswats and the other castes — the perception of the mother goddess underwent a change. The fierce mother goddess became the Shanta Durga or the goddess of peace. But even in respect of mother goddess there are two major temples dedicated to Shanta Durga. One of them in the Ponda Taluka is the monopoly of the Saraswat Brahmin and unfortunately also the Sanatan Sanstha who refuse to leave, although the temple authorities want them out. The other Shanta Durga Temple is in Fatorda in South Goa. Unlike the Ponda Temple the South Goa temple is the monopoly of the Shardosh. The story goes that during the Portuguese inquisition the temple were shifted from Cuncolim to Fatorda. Even now the deity is taken in a procession to Cuncolim and the original residents of Cuncolim, irrespective of whether they are Hindu or Catholic, have precedence in worship at the Fatorpa temple.

Significantly, there are not many temples exclusively devoted to lord Ganesh in Goa. An exception is a 200 -year-old temple in Marcel, closer to Karmali Railway station. There are also some other smaller temples devoted but not exclusively to Ganesh. Unfortunately instead of clay many community Ganesh idols are made of plaster of paris. These do not dissolve in water unlike clay idols. Incentives are now provided to use clay instead of plaster of paris. Clay idols are more expensive than plaster of paris. Matholi items have also become more expensive.
The most amusing twist to the Ganesh festival is that you even get images of Ganesh made in China in the market at much cheaper rate than offered by local artists. While many Goans families make their own Ganesh, the centre of Ganesh creation is Pen in Maharashtra. It has the largest number of artisans making the largest and the biggest Ganesh idols.
I do not believe in god. And yet I have always have a great deal of affection and regard for lord Ganesh. There was a time in the mid-90s when I had a collections of over 500 Ganesh idols in silver, gold, ivory and even jade, besides the Panch Datu which is made of five metals. I was very sick because of doctors who in their kindness pumped me with huge quantities of steroids. I was adviced to detox completely. I was not confident that I would survive the sixth-month-long detox process in Bangalore. I gave away all my Ganeshes to my friends. When I came back six months later with mu weight reduced from 200 kgs to 30 kgs nobody returned my Ganesh’s to me.
I still have a small collection, of which the most cherished is a terracotta Ganesh. It which was with a Christian family for more than two centuries. When I was very ill the mother of Dr Peter Ronald D Souza who was then the HOD of Politically science in the University was kind enough to offer it to me as a gift. I still cherish it and give it a bath and offer flowers to it on every Ganesh Chaturthi week.