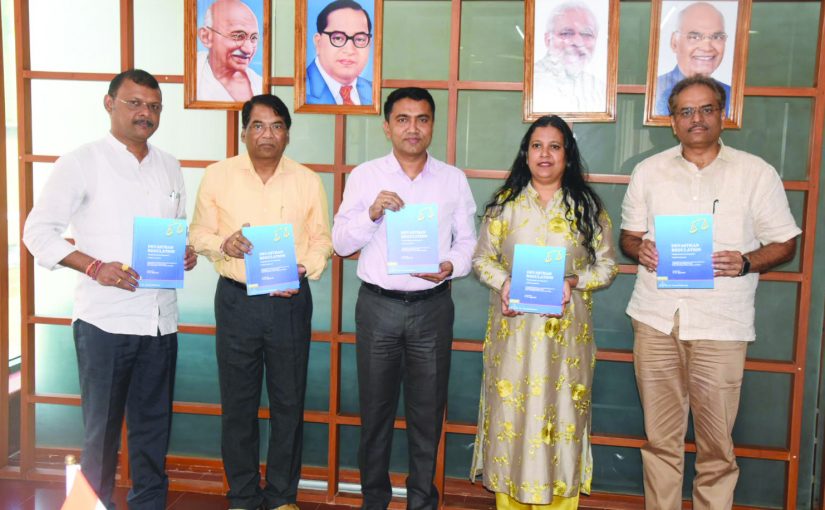 Last year CCP corporators and others foolishly, illegally boarded a dredger to inaugurate the dredging of the Panjim St Inez Creek or nallah. Fortunately, there were no injuries in the mishap that followed. Inauguration of sporting events commence with the chief guest making the first move: Kicking the ball, using the table tennis paddle, even playing chess!
Recently, the bungee jumping pad in Goa was inaugurated. However the chief guest did not take the first leap if only to show the safety of the unit. It would have been fitting if the chief guest for the same was from SAG or better still the Fire Brigade. Why is it a fad to always make politicians the chief guest? When people from other walks of life are more relevant to these occasions and least in this case the ministers could have “recused” from the same and suggested the SAG or Fire Services head.
Goans love their fish: No two ways about that. That they have been saved huge medical bills and suffering goes without saying and notwithstanding the State attorney’s views that formalin does not kill. So who will dare call the FDA officer who did us all a good turn as a chief guest? Of course in today’s type of governance she will have to avoid the taboo word formalin and restrict herself to the oath… “I will carry out the duties of my office loyally, honestly and with impartiality” and its relevance today!
Diocesan schools, Rotary, Inner Wheel, Lions Clubs, AAP, Shiv Sena, Congress, etc? In the absence of this, the moot point is, Does anyone want good governance?
— R Fernandes, Margao

IFFI EXTRAVAGANZA
IN 2004 the then Chief Minister Manohar Parrikar did the people of Goa and Panaji especially the biggest disservice by consenting to host the International Film Festival of India (IFFI). And for the last 15 years it has become a annual 10-day nightmare for Goans. IFFI has in no way benefited Goans but has become a big window of opportunity for politicians in power to rake in moolah and be entertained. Even small contracts are not entrusted to locals.
With its crumbling infrastructure Panaji is already a very congested city with traffic chaos and with IFFI in town it becomes worse. The fun and frolic at tax-payers’ expense only further burdens an already cash-strapped State. Not to mention the extra garbage IFFI generates with Municipal authorities unable to grapple with it. The common man suffers as the day-to-day government administrations takes a 10-day holiday with officials preoccupied with IFFI fiesta.
IFFI has only been a bonanza for workers of the political party in power and not advantageous to Goa. The ground reality is what is enacted is the International Fraud Festival of India! Time to bid it farewell to it and free Goa from this unnecessary extravaganza.
— Aires Rodrigues, Ribandar

MOVE CASINOS FIRST
First things first, as promised casinos have to be moved out of the Mandovi. There are allegations, which may be credible that casinos have evaded taxes worth 6,500 crore and that the 40 MLAs are quiet about it. Can we infer that casino owners bribed concerned MLAs in order to amass wealth? It is well-documented that the illegal mining business that had ground to a halt had evaded taxes to the State and Central exchequers to the tune of35,000 crore as was found out by the M B Shah Commission report and no action has been forthcoming as yet. Like mining, illegalities by casinos have to be probed and action taken. To give an example, it may be noted that in `Fools Die’ by Mario Puzo, though the book was a work of fiction, the central character in the plot was a successful gambler and made plenty of money. However, at last he commits suicide. There are elements of truth in this work of fiction which may be true in real life gambling also. Gambling is a vice that corrupts the mind, it would be better if Goan youth resort to a work culture which will lead to a strong society.
Hard-earned money is being squandered in gambling vices from matka, casinos as well as in the stock market, where many lose large part of their wealth through injudicious investments. Even mutual fund investors are incurring heavy losses since the markets at the moment are depressed. Youth should not fall prey to the lure of easy gambling money but should concentrate on working hard for their living. Compactness and hard work lead to sound heath and happiness.
— Elvidio Miranda, Panaji

KASHMIRI OPINION POLL
The ruling Narendra Modi led BJP government at the centre arrogantly bifurcated J&K into three Union Territories i.e. Jammu and Kashmir, and Ladakh, without even holding any discussions or consultations with leaders of opposition rival political parties. Who knows, tomorrow the same BJP government might also turn other states too (including Goa to finally merge it with neighbouring Maharashtra) into Union Territories giving its own silly excuses/justifications and without even taking the people of these states into confidence.
Today, the poor Kashmiris are forced to live like prisoners in their own land in complete fear with no much freedom at all as the security forces are not allowing them to go out or move around freely. Though, the network services are reportedly being partially restored and schools reopened, parents are still not sending and refusing to send their children in schools due to security reasons. Of course, the Narendra Modi led BJP government is shamelessly trying to bluff the whole world by showing that “All is well” in the Kashmir region using its own paid media but is practically still seen not just refusing entry for opposition leaders but even not allowing journalists of genuine media houses from recording or showing any clippings of the actual inside ground situation or the suffering/plight of the Kashmiris.
Well, I personally believe that the issue of Kashmir in particular historically has, and will always remain a disputed one (whether some ignorant blind stubborn pseudo-nationalists’ supporters like it or not) and it needs to be resolved taking the help of a third party mediator because this part or region was indeed annexed by India without taking the Kashmiris into confidence and without even resolving many issues of great importance. I think that our Indian leaders should give the Kashmiris alone the right to decide their own fate by holding an open opinion poll over the Kashmir issue keeping religion aside instead of distracting the world by forever blaming the Pakistani leaders to honestly show their seriousness in solving this vexed issue once and for all. Are Indian leaders ready to take up such a daring challenge? Or will they forever keep using and kicking Kashmir like a football from one end to the other to play dirty communal politics for their own political benefits/gains? Time alone will tell….
— Jerry Fernandes, Saligao