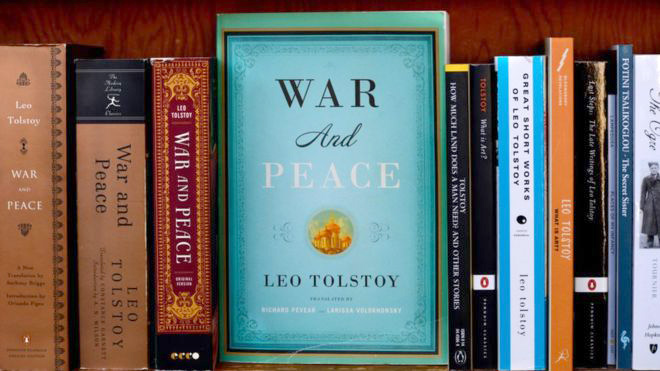 WAR & PEACE: Justice Kotwal criticised the media for reporting that he had asked Bhima Koregaon case-accused Vernon Gonsalves to explain why he possessed “objectionable material” such as 19th-century classic War and Peace by Leo Tolstoy, claiming that he knew War and Peace was a classic and that his comment was not referring to Tolstoy’s book

Leo Tolstoy’s classic novel about Russia during Napoleonic wars became a point of contention during the August 29 hearing against activist Vernon Gonsalves after the Pune Police claimed that the book was part of the “highly incriminating evidence” it had seized from his house in Mumbai during raids conducted a year ago.
The Bombay HC on Wednesday asked Elgar Parishad-Bhima Koregaon case accused Vernon Gonsalves to explain why he kept “objectionable material” like a copy of Leo Tolstoy’s War and Peace and some CDs at his home.
A single-judge Bench of Justice Sarang Kotwal hearing the bail plea of Gonsalves and others also said that “such books” and CDs prima facie indicated they contained some material against the State.
Pune Police also read out the titles of several other books and CDs allegedly recovered from Gonsalves’ house, which included CDs titled Rajya Daman Virodhi released by Kabir Kala Manch, Marxist Archives and Jai Bhima Comrade; books War and Peace, Understanding Maoists and RCP Review, and copies of a circular issued by the National Study Circle.
“The title of the CD Rajya Daman Virodhi itself suggests it has something against the State while War and Peace is about a war in another country. Why did you (Mr. Gonsalves) keep objectionable material such as books like War and Peace, books and CDs at home? You will have to explain this to the court,” said Justice Kotwal.
Gonsalves was arrested by the Pune police under the Unlawful Activities (Prevention) Act after raids at residences and offices of several activists in connection with the Elgar Parishad case.
The police had claimed provocative speeches made at the Parishad on December 31, 2017 were responsible for the caste violence around Bhima-Koregaon village in Pune district the next day during an event to commemorate the 200th anniversary of the Battle of Bhima Koregaon. One person was killed and others were injured in the violence.
Police are probing alleged Naxal links in organising the Parishad, which was held at historic Shaniwarwada in Pune.
Other arrested accused in the case include activists and academics Shoma Sen, Rona Wilson, Sudha Bharadwaj, Arun Ferreira, and Gautam Navlakha.
Gonsalves’ counsel Mihir Desai told the High Court that Pune Police had based the entire case against him on the basis of some emails and letters recovered from the computers of other people.
“None of these letters or emails were written by Gonsalves, or were addressed to him. Therefore, in the absence of any cogent incriminating evidence against him, Gonsalves shouldn’t be denied bail,” Desai argued.
Opposing the bail application, advocate Aruna Pai, who is representing Pune Police, said while police did not find any electronic evidence against Gonsalves from the computer and hard disk recovered from his house, the raid had yielded “highly incriminating evidence” in the form of “books and CDs with objectionable titles mentioned above“.
Desai countered the prosecution argument saying “mere possession” of such books and CDs “did not make Mr. Gonsalves a terrorist, or a member of any banned Maoist group.”
Agreeing with defence that mere possession of such material does not make anyone a terrorist, Justice Kotwal, however, said Gonsalves would have to explain why he kept such material at his home.
The judge also said Pune Police too have to do “much explaining” to convince the court that the material found on such CDs and in the books is incriminatory against Gonsalves.
“So far, the police have failed to provide details of what was on the CDs or in the books and pamphlets recovered that linked Gonsalves to the case. Merely stating that they have objectionable titles is not enough. Have you tested these CDs? What if they turn out to be blank inside?” the judge asked.
“If you (prosecution) do not place on record the content and details of such material, the court will have to ignore them,” said Justice Kotwal.
The Bench also directed police to provide details of the source of the emails and letters, and their authors and recipients.
In response Desai submitted on Thursday that none of the books seized are banned under Section 95 of Criminal Procedure Code (CrPC), and are not sufficient to incriminate the accused. He pointed out that most of the books are available on Amazon and other platforms, saying, “The State has not taken any step to get those books banned in the last one year.”
Justice Kotwal, who was said to have made the comment on Wednesday, later said he knew War and Peace was a classic and that his comment was not referring to Tolstoy’s book.

The judge’s question quickly made news and War and Peace was soon trending on Twitter. The tweets ranged from jokes to shock over the state of India’s judiciary.

The judge should leave his Pride and Prejudice aside, and try use his Sense and Sensibility, and then he’d realise that the matter of reading War and Peace is not about Crime and Punishment, but about Power and Glory, lest his tenure will be a time for Laughter and Forgetting. https://t.co/LUkvxpez5P
— Salil Tripathi (@saliltripathi) August 29, 2019

Most people have War and Peace in their homes because they have been trying to finish it for 10 years + #books #truestory
— Advaita Kala (@AdvaitaKala) August 29, 2019

Astounding! HC judge asks an activist alleged to be a Maoist, “Why have you kept (Tolstoy’s classic novel) War & Peace in your house?”! What kind of HC judge would ask such a question?! What have we done to the judiciary?!https://t.co/X6qfcT35fC
— Prashant Bhushan (@pbhushan1) August 29, 2019

“War and Peace is about a war in another country,” Justice Sarang Kotwal said. “Why were you having these books and CDs at home? You will have to explain this to the court.” India. Today. https://t.co/YOEkg2gZqq
— naresh fernandes (@tajmahalfoxtrot) August 28, 2019

Others wondered how they would fare in a courtroom given what’s on their bookshelf, and some have issued a call out asking people to share books from their own “subversive” collection.

Realized that my chances of getting bail are slim in today’s India. Have have much ‘worse’ literature on my bookshelf than #WarAndPeace. Manto, Doniger, Rushdie, EVEN A BOOK ON JINNAH pic.twitter.com/ERLKyDWRFA
— Akash Banerjee (@TheDeshBhakt) August 29, 2019