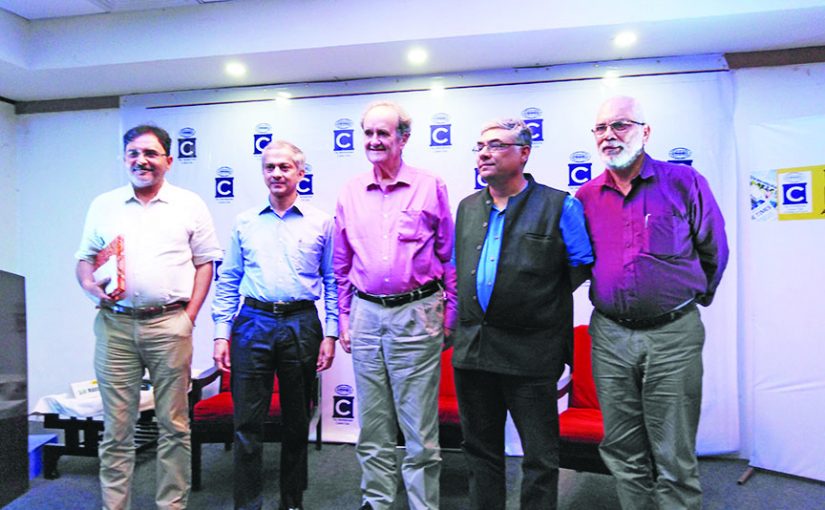 In a nutshell that’s what much feted `Indian’ journalist and broadcaster of BBC fame Sir Mark Tully told a jam-packed audience which turned up to listen to him in the Patrakar series of The International Centre on September 19, 2019. The much-respected and loved Kolkata-born journalist became a familiar face across India while reporting news stories for BBC over 30 years. Frail looking but beaming with smiles the 84-year-old Mark Tully replied gently to a query about his fitness, “It’s all good-luck and God’s grace!” Earlier interacting with senior journalist Sujay Gupta and ICG director Dr Pushkar over a gamut of issues he reiterated that the old British colonial mindset of master-servant still plagues Indian administration and bureaucracy. So little moves to serve democracy! Pic shows (l to r) ICG Director Dr Pushkar, ICG President Yatin Kakodkar, Sir Mark Tully, Sujoy Gupta and ICG Trustee Dinar Bhatkar

GOA is a very cash-strapped state with the government on a monthly borrowing spree to tide up its day to day expenses. Despite this entire very grim scenario the government has the audacity to squander lakhs of rupees in displaying huge cut-outs and advertisements all over welcoming the Union Finance Minister Nirmala Sitharaman to preside over the 37th GST Council two-day met in Goa.
All this atrocious expenditure on needless fanfare should be strongly denounced. Financial discipline and monetary accountability is a must if Goa and India is to move on. With Nirmala Sitharaman herself grappling with facts and figures the future does not seem bright. Every paisa from the state exchequer must be very judiciously spent. It is particularly appalling when expenses are incurred on needless hype.
It is an irony that while the state cries over lack of funds we see very unjustified expenditure. For rationalization in government spending, strong and sincere austerity measures need to be taken with criminal waste of public funds on superfluous expenditure strictly prohibited.
Fiscal answerability and responsibility has to be an ongoing sustained process. Due to repeated government follies we have landed in this current fiscal upheaval. Now it is the bounden lawful responsibility of the authorities to work towards putting Goa back on the path of economic prosperity.
— Aires Rodrigues, Ribandar

Enough!
On September 18, a local daily reported that residents of Canacona have demanded a registry of all kidney ailment patients from Canacona. The reason: to better understand this endemic disease and find solutions. The report states that over the last couple of DECADES, there has been a high prevalence of kidney ailments in Canacona. Studies have been conducted by all Indian agencies but no solution found. From Palolem alone, 20 patients need to undergo regular dialysis.
First off, on May 21, 2019, the National Kidney Foundation in New York announced its plan to form the first National registry of patients with CKD – Chronic Kidney Disease! Wow! Villagers in Canacona coming out with this idea? Villagers, not Doctors! Goan villagers: and they can’t compete with rest of India, we are constantly reminded!
Most importantly, how have we not found out the reasons for high incidence of kidney failures in Canacona? As a local there mentioned, it is like carrying a cross for both patients and the family! It is high time the government approaches WHO to find the solution: Doctors/researchers in India have had criminally endless time to do so and failed. It is criminally negligent on the part of the government to keep these poor, helpless people hanging fire. Since the dialysis patients have to spend agonisingly long hours, a mobile based app could have been made to track all such patients. Many of the villagers keep domesticated animals like cattle and dogs: have the latter also showed similar diseases?
We note that ICAR Goa have sent their people to tackle the palm pests in a Gulf country: now we need experts from other countries! In the mean time, Canacona CKD patients need to be given preference and medical help for kidney transplants. The report mentioned that the dialysis housed at the Health Centre there is run by a private doctor who is ‘doing a wonderful job’. Surely, he should have been mentioned in the report! We recall, last year, the government tried to hound out a private doctor providing dialysis at a very reasonable cost, in favour of the ‘big players’. The reporter would have done well to ‘investigate’ the same!
— R Fernandes, Margao

OPEN LETTER TO SANJIT RODRIGUES
Welcome to the CCP. CONGRATULATIONS!
I’m glad that you have once again taken up the reins of our Panjim Municipality which is now in a deplorable condition after everybody in the CCP, whether Commissioners or Mayors, have made a mess of it. Being a Panjimite I feel ashamed of the state of Panjim and can only wonder and pray that it will be back in a sound and original condition. It needs a lot of effort which only you can do.
Your best efforts will be needed to repair the damage roads all over, including the several pot holes even in front of your CCP building. Garbage and sewage are two other huge problems for you to tackle and I am sure if you can get help from our Chief Minister Dr Pramod Sawant and Panjim MLA Babush Monserrate you will surely succeed to bring Panjim back to its original grace.
You must also put into action steps to clean up the St Inez creek. It is the lifeline of the city.
Apart from the above, which are large scale projects, there are some very specific tasks you must urgently take up.
Get rid of casinos in the river Mandovi and as a first step, stop the building coming up at the Captain of Ports jetty.
PWD must be given a lift instead of the GSIDC. The GSIDC is also going from bad to worse because of bad elements in the department, including the earlier MLA Sidharth. He was responsible for the city reaching in this bad condition.
Whenever you need help from Panjimites, we are always there to give you helping hand but remember we will be the first to bring illegalities, if any, to your attention.
Can you investigate and stop a 8-storey building which is coming up at Bay View colony, Dona Paula, near my house? This building has on the surface all the approvals received from TCP, CCP, Health Department, and Fire Brigade and was supported by the earlier Taleigao Sarpanch despite several complaints and reminders. But perusal of plans available in the file of NGPDA inspected by me shows that the width of this road where this construction is going on shows 10 metres whereas the existing road in reality is approximately just 4 to 5 metres wide — allowing only two vehicles to move with great difficulty.
The CCP had given permission despite this construction being in Taleigao jurisdiction which is in line with mine. I and all my neighbours pay house taxes for Taleigao, why did only this building continue to pay house tax to CCP? The boundary road between CCP and Taleigao Panchayat falls exactly in front of this illegal building.
Babush has promised to look into this 8-floor illegal building. It is supposed to have a swimming pool in its 500 sq mtres area and the owner is a a Sadarji who is involved with the casino people. An 8-storey building on such a small residential lane will be devastating. The lane was not built for heavy traffic.
This investigation needs to be taken up on war footing. All the residents are suffering.
— Stephen Dias, Dona Paula