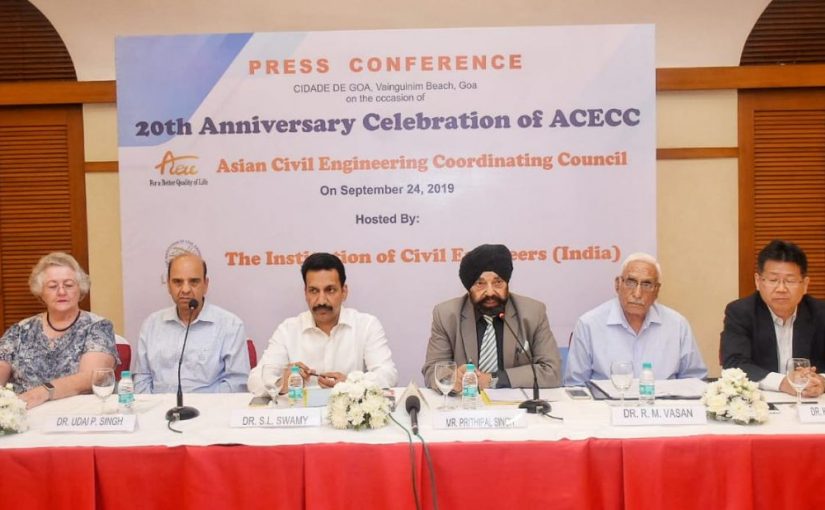 CIVIL Engineers from 14 countries are celebrating the 20th anniversary of The Asian Civil Engineering Co-Ordinating Council (ACECC) in Goa this year on September 27, 2019. Do you know there is an Institution of Civil Engineers (India) and it is a degree level recognized institution? It is run by The Institution of Civil Engineers Society registered under the Societies Registration Act of 1860 and offers programs in civil and architecture engineering at degree and diploma levels to students, with the aim of strengthening resources in civil and architectural engineering. ICE (I) is hosting the ongoing 37th Executive Committee Meeting of ACECC as well as deliberating future challenges coming up for the civil engineers fraternity in the world.
Speaking to media people on the eve of the ACECC’s 20th anniversary celebrations ICE (I) chairman Dr S L Swamy said that it was rare occasion when so many members of the engineering fraternity come together to meet with take stock of where the profession of civil engineering is heading. This is one occasion when seniors in the profession interact with an emerging group of younger engineers; plus, he added Goa with its beauty of beaches and churches offers an ideal place to exchange knowledge.
Others who spoke included chairperson of the meet Prithipal Singh, Prof R M Vasan, Dr Kenichi Horikoshi, Dr Udai P Singh and others who including Megan Maughan who was a very senior person of the ACECC. Interestingly, she said the USA has the oldest engineering organization in the world, followed by Britain. The engineering fraternity is something like 165 years old in the USA, she said the idea of their international meets was to share information and technology which may not quite fit all countries, but it may be adapted for better results.
For instance, she recounted meeting a young engineer from Bangladesh who had come up with an ingenious way to re-build an entire village washed away in a cyclone. Engineering technology must meet the needs of terrain and climate change and even the USA they will have to deal with such issues as global climatic change and the rise of sea water in coastal belts.
For whatever is built they have a code and standard available and ACECC conferences are also to come up with new ideas and options on how to proceed with climatic changes on a global scale. Meeting the needs of climatic changes and building accordingly will pose as a problem in the whole world, “Because climate change is more visible in some areas and it is said that all ports will be under water in another 50 years! In the USA we think Miami will be the first to disappear under water. It is a big issue and they must find a way to deal with it…perhaps the future will see floating cities the world over.”
She said adaptation and mitigation are the keys to finding solutions to climatic changes the world over and it’s a different goal for every country, “We need answers for everybody. It is the young engineers who will play an important role tomorrow showing us the way…”
The ACECC was established on September 27, 1999, in Tokyo with five civil engineering societies and its membership has now risen to 14 countries, namely the American Society of Civil Engineers, Chinese Institute of Civil and Hydraulic Engineering, Engineers Australia, Indonesian Society of Civil and Structural Engineers, the Institution of Civil Engineers (India), the Institution of Engineers (Bangladesh), Institution of Engineers (Pakistan), Japan Society of Civil Engineers, Korean Society of Civil Engineers, Mongolian Association of Civil Engineers, Nepal Engineers’ Association, Philippine Institute of Civil Engineers, Vietnam Federation of Civil Engineering Association, Federation of Myanmar Engineering Societies.
Amongst the deliberations of this ACECC meet two seminars were slated for Sept 27 titled “Improvements to engineering governance through common ethics standards” and “Applications of geo-synthetics for various civil engineering disciplines” with international and national-level engineers giving their presentations. It is expected that the engineering fraternity and Young Engineers based in Goa will attend the seminar by way of significant learning. The ICE (I) is planning to host CECAR9 (Civil Engineering Conference in Asian Region) in Goa again in September 2022 which will bring 1,000 delegates from the world over. Presumably, the world will be in need of engineers more than ever given the growing conflicts with global climate.