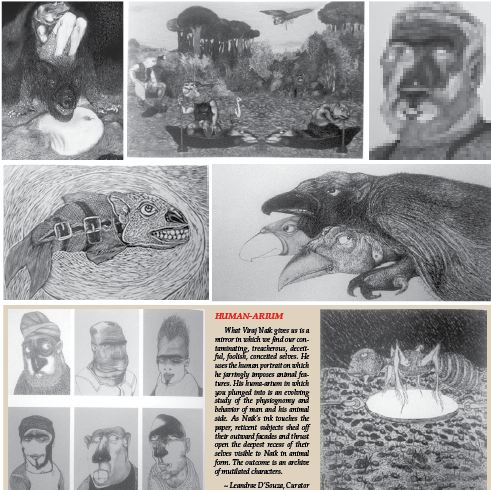 VIRAJ NAIK is an extraordinary artist with a keen eye for the animal instincts rooting or brooding within each one of us benignly or malignantly. His collection of “manimal” as he calls them, hybrid drawings, etchings, pictographs were on show for over a month at the Sunaparanta Centre for the Arts Goa till September 16, 2016.
Really, one may not have to look closely to see in his drawings wild animals and creatures familiar and unfamiliar – be lion or tiger or leopard, elephant, horse, goat, or frog, mosquito, fly, barracuda, eagle, rare unicorn, many more creatures of the uncivilized natural world real and unreal. This artist offers sharp, acute, satirical, sartorial insight into the complex jungle of the human mind which may be popularly perceived today in the age of kalayug – the artist’s vision may remind many of us of an old saying and that is ‘Vinaasha Kaale Vipareetha Buddhi’! One art-lover doing the rounds of the gallery with me had this moment of epiphany and exclaimed, “Oh, this artist’s drawings are giving me a headache!’ To which I could only comment, oh well, maybe some headaches are good if they make one think and perchance help control or tame the wild beast lurking within all of us?
Goan Observer offers you glimpses of this prolific artist’s recent solo show aptly titled `Ordinary Superheroes: Tales from the Ani-man Kingdom’…make what you will of them. A most thought-provoking artist who has truly arrived up there where it matters or down there where it does not, or does it? The show was hosted by Dipti and Dattaraj V Salgaocar who are founder-patrons of the Sunaparanta Goa Centre for the Arts and curated by Leandre D’Souza.

Hybrids are one of the oldest, commonest and most fascinating subjects in storytelling. The lack of a strong divide between humans and animals in traditional and ancient cultures has provided the underlying historical context for the popularity of tales where both have mingling relationships, where one turns into the other or where a mixed creature goes on a fantastical journey. My work takes this narrative twist as a way of understanding our existence marked by ink lines, soft graphite and sharp needle pierced into metal.
I have been preoccupied with study of interspecies relations, inspired by ancient Egyptian depictions, Indian spirituality, Greek mythology. It has been written that representations of human-animal hybrids had their origins in religion and later changed in meaning while still retaining their spiritual root. My drawings and sculptures are a manifestation of the double beastly standards present in our social, cultural, political and administrative environments.
As I draw, it is as if the skeleton that has been hiding inside the individual, can finally be seen clearly. The textures, lines and patterns that have smeared the body visible, becoming a kind of investigation into the human or animal figure. The space separating man, animal, nature intermingle. In this ambiguity, a sub-conscious revelation is made. It’s like the undercurrents of our psyche to life as irrational strokes of free-flowing lines commingle.
My obsession to translate impossible ideas onto paper has resulted in the chimera drawings. These represent an imagined, future world where characters become superheroes. But not all possess good qualities. Some turn grotesque, assuming the role of the satyr social and democratic governance. They look inward within Goa and then outward finding connections with the present political realities and their own implications of the grotesque of those in power. It sterns from the notion of farnily — our own private governments — that nurture and dictate the way we think, behave and function on a micro and macro level.
Most hybrid portraits will stare directly at the viewer, reversing the gaze and heightening the tension between the two. This makes the viewer uneasy, as he is fearful that the portrait he sees before him will reveal a deep, dark secret of himself
The mind embodies the surface — textures and forms bring sombre acceptance to pitch dark tones. The gravitational force is evident as is our relationship with the earth. Reptiles, carnivorous animals, herbivorous beings, air-borne and aquatic creatures — are all characters that exist in an imposed reality, arousing curiosity. Thus, the cycle of life moves on and on…