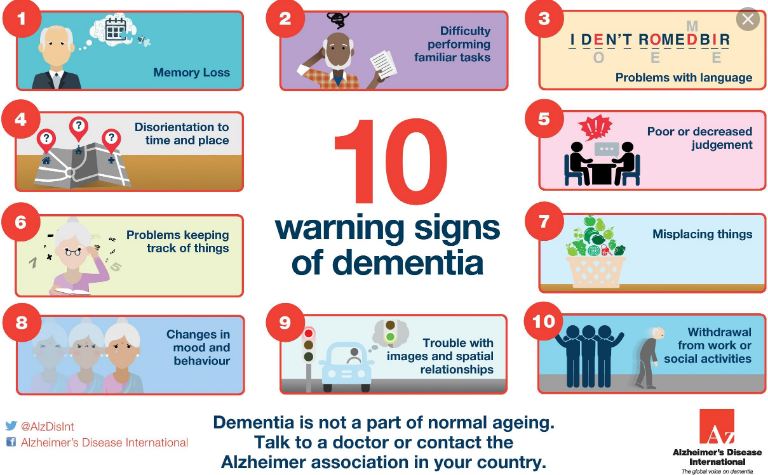 ‘We are what we eat’ a statement made by Father of Medicine Hippocrates, more than 2,500 years ago, still holds good today. On the occasion of World Alzheimer’s day, September 21, Dr Amit Dias provides food for thought on the role of nutrition in Alzheimer’s disease. The theme for World Alzheimer’s Day this year is ‘Dementia: Let’s Talk’

With one new cases of dementia every three seconds, there is a need for collective action at all levels on a war footing to deal with the growing burden of dementia.

From womb to the tomb

It is now known that micronutrients and fat accumulated while the baby is still in the mother’s womb play a vital role in the maturation of the brain and the nervous system, which in turn influences the risk of cognitive impairment and dementia in late life. Better antenatal and perinatal care is vital to ensure optimal health.
Studies have revealed that signs of early nutrition deficiency such as low birth weight (ie weight of the newborn less than 2.5 kgs) and stunting in early childhood have been independently associated with lower cognitive abilities in adulthood.
On the other hand, normal and higher weight may be associated with better cognitive capacity. But this association in not as simple. Overweight and obesity are known to be harmful and can potentially lead to neurodegeneration and cardiovascular diseases.
The impact of nutrition on memory and cognitive health is very complex due to multiple risk factors that are now known to contribute to memory loss in late life.

antioxidants:
The primary pathology that causes dementia and cell death is neuronal inflammation and oxidative damage.
Oxidative stress is known to be associated with a number of non communicable diseases. Antioxidants such as Vitamin A, Vitamin C, Vitamin E and flavonoids are known to fight oxidative stress and prevent cell death and preserving brain function.

The B Complex Vitamins:
Vitamin B6, Vitamin B9 , Vitamin B12 have been shown to play a role in cognition. They are required for cell metabolism. A deficiency of folate and Vitamin B12 can lead to the rise in Homocysteine which is known to be associated with cognitive decline.
Omega 3 fatty acids:
Over 20% of the cerebral cortex and white matter is made up of phospholipids. The function of neuronal cell membranes is modulated by the fatty acid composition. Omega 3 from the diet helps in synapse formation and neuronal growth and is essential for maintaining cognition.

Mediterranean Diet:
There are several studies that report the benefits of the Mediterranean diet in the prevention of dementia. It seems to do so through its effect on the cardiovascular system. A randomised controlled trial — PREDIMED-Navarra — compared the effect of Mediterranean diet (MD) with extra Virgin Olive Oil (EVOO) and Mixed Nuts with a low fat control. The intervention lasted for six and half years and revealed that the ones on the MD+EVOO plan had better cognitive outcomes.

However research on nutrition should be taken with a pinch of salt. We can only report what has been studied, there is a need for large number of studies on various other dietary practices to get a better idea what is best for us. Our bodies are designed to digest and absorb the nutrients from our staple diet and this is generally the best for our system. The Goan xitt-kodi for example, with a non-fried fish option and a generous helping of local vegetables could also help in boosting our memory.
The general rule is to eat in moderation, eat fresh fruits and vegetables, avoid fried items, reduce the number of times you eat from restaurants, avoid energy dense foods, avoid sweets, stay hydrated all day, maintain your weight and get involved in physical exercise. Have a dedicated meal time and avoid all kids of distractions such as mobiles, television, conflict resolution while you are eating, eat together with your family, learn to deal with stress and ensure you have a social life outside your family and workplace.

Rising at the rate of one new case every three seconds, dementia is rising as one of the major public health problems in the world.
According to ‘Dementia India Report’, there are an estimated 4 million people with dementia in India alone. According to the latest report of Alzheimer’s Disease International, there are an estimated 50 million people with dementia worldwide. This number will increase to an estimated 150 million in 2050. Let us do our bit to take care of our brains and encourage others to adopt a health brain lifestyle in order to prevent dementia.
Prevention of dementia is certainly possible and one must inculcate brain healthy habits early in life.

What is dementia?
Dementia is the umbrella term for a group of progressive, degenerative brain syndromes that result in memory loss, difficulty in thinking behaviour and emotion. It’s is not normal part of aging. Alzheimer’s disease is the most common form of dementia.

What are the warning signs of dementia ?
Everyone should be aware of the 10 warning signs of dementia. Memory problems and confusion in the elderly could be a sign of a disease and one must seek help from a physician.
Our ultimate aim is to form a dementia friendly community, and the first step in this direction is to raise awareness on this condition.
Recent memory loss
Disorientation in time and place
Problems in language
Difficulty in performing familiar tasks
Poor or decreased judgement
Misplacing things
Problems keeping track of things
Changes in mood and behaviour
Trouble with images
Withdrawal from social activities

(Dr Amit Dias, lecturer at the Department of Preventive & Social Medicine at Goa Medical Collage, had the honour of being part of the Guideline Development Group for the World Health Organisation to look at the evidence on prevention of Alzheimer’s disease and dementia. )