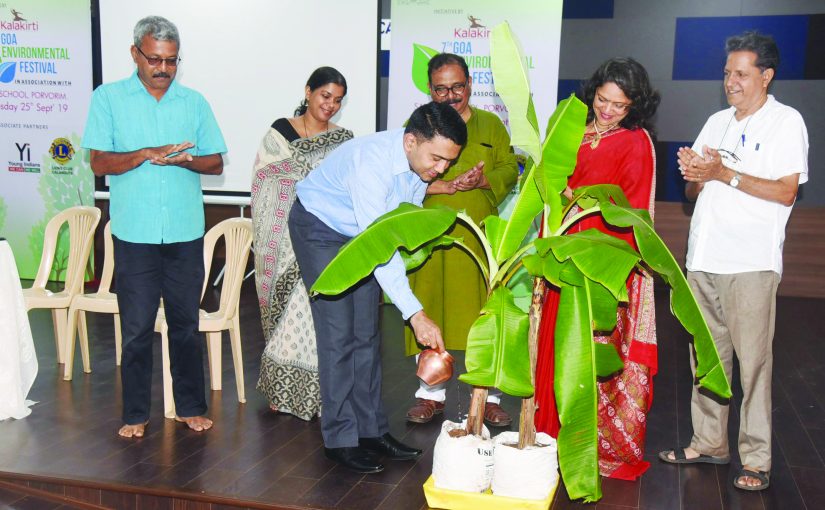 CHIEF Minister Pramod Sawant needs to apologize to the people with folded hands for having falsely certified on Aug 31 earlier this year that Goa is now officially open defecation free (ODF). The very disgusting and appalling ground reality is there for all to see with people urinating and defecating in the open just about anywhere, fields, along hills, along riversides.
Even at the very doorstep of the Goa Secretariat at Porvorim on the slope hordes of labourers continue to merrily relieve themselves at the seat of power. It is not unusual to see tourists on arrival at the bus terminal or railway station urinating close by because of lack of properly maintained toilet facilities.
This is the sorry state of affairs even at most of our government offices. Having miserably failed to deliver on any of its promises from effective garbage management to safe, smooth roads and adequate medical facilities, to name but a few, this very incompetent government must hang its head in shame. Nothing more needs to be said on its failed promises to the long-suffering people of Goa that all roads will be free of potholes post-Ganesh Chaturthi and now the CM is asking us to further suffer for another few months. A shame.
The bottom line is that for Goa to be ODF it would have to first liberate itself from the current rampant corruption engulfing us. It is high time our powerless CM realized that the astute people of Goa are not fools to be hoodwinked by false facts and figures deviously released by his government.
— Aires Rodrigues, Ribandar

JUST FOR YOU
Just so that you know and may do something about it. How long do things take to decompose?
Here an estimation: Paper towel – 2-4 weeks; banana peel – 3-4 weeks; paper bag – 1 month; newspaper – 1.5 months; apple core – 2 months; cardboard – 2 months; cotton glove – 3 months; orange peels – 6 months; plywood – 1-3 years; wool socks – 1-5 years; milk cartons – 1-5 years; cigarette butts – 10-12 years; leather shoes – 25-40 years; foamed plastic cups – 50 years; rubber boot sole – 50-80 years; aluminium can – 200-500 years; plastic bottles – 450 years; disposable diapers – 550 years; mono filament fishing line – 600 years; plastic bags – 200-1,000 years.
Share the information widely and urge people to shun plastics, one of the major causes of the global greenhouse effect. Support green environment today!
— Shared over social media
Banking on Banks
In Goa the RBI imposed restrictions on the Mapusa Urban Co-Op. Bank (MUCB), last September. This was because the cash reserve ratio was found to be in the negative.
13 directors resigned overnight leaving staff in a tizzy after promising support through rough waters.
Today exactly one year later we find out that over 200 Goa Co-Op Banks & Societies are looking at about Rs 800 crore losses in the tiny state of Goa.
This month the RBI imposed restrictions on the Punjab Maharashtra Co-Op Bank (PMC) ahead of a proposed merger of these two Banks — (PMC) & (MUCB).
What happens to the common people and their money? Some have collected savings to have a family member get married and are in a fix, others are trying to live off pensions and at 70 plus losing access to their money. People with family in hospitals need access to funds and their ATM card gets declined. Fathers cannot feed their families due to these restrictions which are no fault of the good, honest, tax paying, working class citizens. Why do they deserve this? Are there no security measures in place to prevent such disruption of lives? Is this pain and suffering necessary? Is the common man always doomed by shady and corrupt practises of the few?
Board members of Banks misuse their positions to ignore persons with merit and employ kin. In some cases more than required staff was employed! (TOI) 26/9/2019.
This abuse is rampant across systems BUT allowing this to happen within the banking industry only goes to prove the level of arrogance and sheer disrespect for people and their investments.
How can we be sure that our Banks are not cooking the books? How can we be sure our hard earned money really safe? Will the Government step in and protect our interests? If yes, then how?
The Government just took 10.7 Lac Crore from LIC (a trusted government insurance company that most Indian common man has a basic investment in) and put it in a bunch of failing Banks?! (IDBI, PNB, Corporation Bank, Allahabad Bank and State Bank of India that have reported losses every year over the last three years, on average?)
What will help us regain our trust in the system? How can we be sure that our elected government will take care of the common man who wakes up each morning, goes to work to feed his family? Are we as citizens not paying enough? Is there more we can do as aam aadmi to ensure our families are secure?
We are doomed if we keep money at home and probably doomed if we keep money in the banks too! Best to Invest in the Automobile industry.
— Kenneth Goes, Goa

SENTINALS SAVE LIVES?
Data over the last 5 yrs suggests that 102/108, and state of art cardiac centres started in Govt and pvt sector, could not decrease death rates due to cardiac issues while the simple traffic sentinel scheme has saved the lives of 75 young healthy people without any significant money spent by the government! Anything which saves lives has to be welcomed despite some hitches which can be rectified as saving lives is the ultimate goal! I can break all rules and regulations to save a life as once dead, nobody can bring a person back to life!
— Dr Shekhar Salkar, Panaji

Youth Power
Sweden’s 16 year old sensation, Greta Thunberg, has struck an emotional and concordant chord with the young brigade all over the world on the issue of global warming and climate change.
To be able to achieve consistent results on governments across the globe, youth must now exert relentless pressure globally on all measures that will exacerbate warming of the earth through the use of fossil fuels and create awareness of the dangers of climate change on a case to case basis and on a counting to counting basis.
The future of the younger generation is at risk due to unfettered rise in temperatures around the world as a direct consequence of burning of fossil fuels, deforestation and thus melting of the ice caps and rise in the sea levels resulting in submergence of land masses as well as the implications on health of the peoples of the world. As far as India and Australia is concerned the youth of Australia have to oppose the deal that the Carmichael coal mines will be selling coal to India vis a multi billion dollar pact with the Adanis. Closer home youth could also resolutely oppose the cutting of 54,676 trees for the construction of the Mopa airport.
Goan students should also galvanize support so as to oppose Mopa plateau from being turned into an airport due to wanton felling of trees and thus destruction of a hot- spot of biodiversity rich in exotic flora and fauna, as well as saving the 46 crystal clear springs of water in this extension of the western ghats as well as a United Nation Conservation area.
The essence of any credible success is the ability to be relevant and effective.
— Stephen Dias, Dona Paula