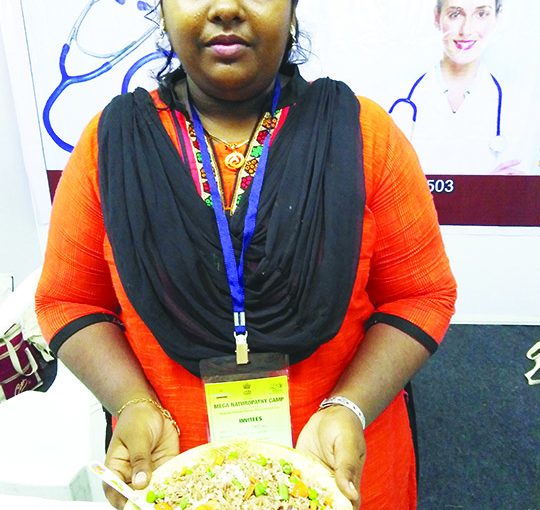 Elsewhere at the impromptu all-purpose tent where breakfast, lunch and dinner was prepared by the NIN kitchen staff — dalia-peanut chutney for breakfast, pulao-dal for lunch… simply scrumptious!

WITH the three-day Mega Naturopathy Camp in town and me being a nature’s child at heart and soul naturally I couldn’t resist going back again and again for feedback of the fruitful kind. From Naturopathy to Allopathy is a  long, long way to come for civilization and to think it all basically started with the natural wisdom of drinking and eating right to be happy. Even my friend Mahatma Gandhi was obsessed by the politics of food and how we should eat as close to the bosom and womb of Mother Earth as possible for our good…alas, instead of imbibing the earth’s wisdom modern India has just strayed down the path of perdition.

The National Institute of Naturopathy in Pune is doing much to change the present scenario of ignorant drinking and eating. (Sigh) I’ve been to Pune several times but never to the famous NIN which was once popularly known as “Bapu’s Ghar” or “Bapu’s Bhavan” on Tadiwala Road (now Matoshree Ramabai Ambedkar Road) which served as home away from home for Mahatma Gandhi once upon a time courtesy his friendship with Dr Dinshaw K Mehta — so much so the kind-hearted philanthropist turned his mansion in Pune into a Nature Cure Clinic & Sanatorium at Gandhi’s behest and the All India Nature Cure Foundation Trust was established with Gandhiji as its chairperson live long.

The story is that he spent 156 days here on various occasion consulting Dr Mehta as also conducting his various naturopathy experiments with eating a predominantly raw diet and fasting which you must know even today is considered as the best healing therapy of them all!

The great leaders of the freedom movement visited Gandhiji here often and from here he orchestrated many of his plans to persuade the British Empire to go home. Hey, there’s a lot of historical anecdote out at NIN and one of these days I’ll catch up with it, but for the time being I’ll skip it and just tell you that after independence the old Nature Cure Clinic & Sanitorium was handed over to government of India by Dr Mehta on March  17, 1975, and the today’s National Institute of Naturopathy was registered as a trust in New Delhi and it is governed by governing body headed by Union Minister of AYUSH Shripad Naik. The  institute is the place to go if you seeking healing courtesy naturopathy. It conducts yoga classes, runs a modern naturopathy clinic, has a free acupressure clinic, has a health shop, a library, and offers various courses in Naturopathy (also known as Nature Cure), assistant training courses and conducts educational activities. Amongst other things it offers a special rejuvenating massage progam for restoration of vitality to the general public.

I understand a team of some 80 NIN staffers came down to Panaji for the mega naturopathy camp and their nutrition department is led by Dr Praveen and Dr Shubhangi. They supervised breakfast, lunch, dinner, snacks for something like 600 visitors to the camp daily, half of them from out of Goa as delegates to groom themselves as better naturopaths in personal life.

One lunch I stood in the queue to be ushered into a large tented space, the meal was of vegetable pulao topped with salad raita — absolutely delicious. Not too well organized but I can understand how difficult it must be to handle such large-scale cooking in less than perfect conditions. One of the volunteers apologized profusely at the queue standing in the hot sun and many walked away for it was almost 2 pm…but once the service started it was alright.

The tented space apparently also doubled as training ground for yoga competition students and the first day the NIN team had put up a fantastic vegetable and fruit carving competition, also food competition…a pity visiting Governor Mridula Sinha did not get to see the prizewinning recipes and taste them. It threatened to rain and the viewing was more or less botched up, those who prepared the dishes deserved better and I tried to get some of the recipes but failed miserably! I had also got the timing of the food competition wrong and missed the talk on the rigged up stage.

There’s nothing to cooking au natural really, it’s more like fixing a meal imaginatively. Retaining nutritional values is of the essence and NIN has a cookbook boringly titled titled `Naturopathy Food Concepts’ (softcover, `250) but very useful to acquire if you want to learn how to cook to live rather than get sick and die! Cooking and overcooking and spicing up food to the gills can be terribly injurious to health, my dears. Plus, the act of cooking itself ensures that valuable enzymes and some vitamins like vitamin C are lost…the NIN cookbook offers a lot of insight actually and Prof (Dr) K Satya Lakshmi (director, NIN) notes in her Preface: “The pre-industrial Indian society viewed food as giving nourishment physically, intellectually, culturally and spiritually. While the post-industrial era and ethos speaks a language of food in terms of calories, proteins, carbohydrates, fats, trans-fats, vitamins, minerals, antioxidants, soluble and insoluble fibre, the Indian society and its people find to their utter dismay that these terms are not fitting well into their cultural and social settings. There is a deep sense of anguish and conflict as the dietary habits and the food itself is undergoing rapid changes in time and space…once highly evolved food culture has now reached a dead end and facing extreme turbulence as it negotiates a path riddled with conflicting needs, fads and market forces…”

TODAY’S  naturopathy eating recommends you give up mainstream commercialized wheat and rice in favour of the country’s more honest fibre-rich millets! Hey, I also  picked up a book on millets of the country titled “Siridhanyalu, Food  That Heals” detailing the efforts made by Dr Khadar Vali (Phd, famous scientist and expert on the subject of health and food, also popularly “father of jungle farming” in Karnataka). Haven’t read this slim booklet closely enough yet, but it’s eye-opening on how diabetics could do better eating millets instead of refined cereals — be it barnyard, foxtail, browntop, kodo or little millet. There’s a terrific revival of millet farming down south India in Karnataka and Andhra Pradesh.

From the sound of it Dr Khadar Vali is quite a household name in Karnataka today and his booklet compiled by Panthangi Rambabu is quite a treat, somewhere Dr Vali says, “Eat only when hungry. Don’t eat when not hungry. After the advent of the British we picked up the habit of eating thrice a day. It is not necessary. One can eat only when hungry. One should not eat when not hungry.”  Also, when hungry, eat “siridhanyala dishes” (that is, millet dishes instead of acidic cereals which are farmed to death with chemicals).

Well, need I say more about how naturopathy can revolutionise our modern urban drinking and eating lifestyles to die rather than stay alive and kicking? Just do it my dears, join the naturopathy revolution under way in Narendra Modi’s new India! I don’t particularly like him or his pals but I approve of naturopathy’s brief for better health and the fact that Gandhiji said naturopathy can be practiced in the poorest of homes…one of these days I’m going to the National Institute of Naturopathy to learn how to cook, okay.