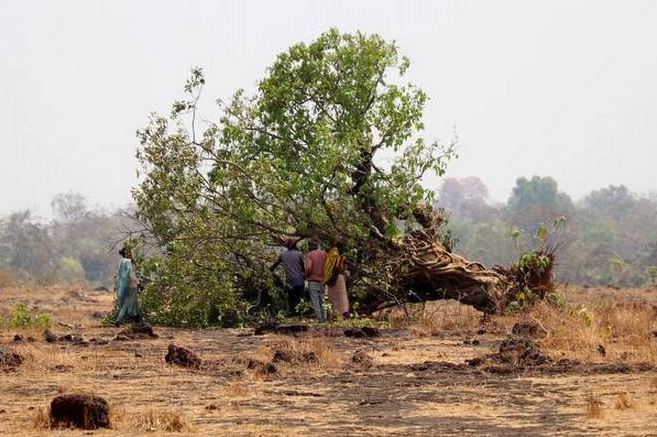 DESTRUCTION: A 2018 photo of a tree that was cut for constructing the Mopa airport in Pernem, 40 kms off Panaji. (Photo Credit: Atish Pomburfekar)

ELVIDIO MIRANDA reminds us of why its worth fighting against Mopa. A project that will make the rich richer while doing untold damage to the ecology and unique flora and fauna of the region. As it stands today A consistent stand by the Supreme Court will mean the scrapping of the Mopa airport project…

First and foremost, apprehending black flag demonstrations, the foundation stone for the Mopa airport was laid 40 kilometres away to prevent the embarrassment of the wrath of the peasants of Mopa by none other than the prime minister of India. This goes on to prove the lack of transparency of the motive of the inauguration of the project as well as accountability and norms of decency.

The issue of felling of trees which number 54,676 gains precedence over other reasons, since this is a main bone of contention which is supposed to be addressed by the Supreme Court after October 18, when the trial in the Ram Janbhoomi-Babri Masjid case ends and the Mopa verdict will be pronounced. It is known that the entire Mopa plateau is dotted with mango, cashew, jack fruit amongst other fruit bearing plants and the number of trees facing the axe is unprecedented for any other project in the history of Goa. The Goa government and the GMR have already tried to mislead the Supreme Court by denying the existence of trees but by portraying that there were only bushes. In fact most of the trees are adult trees which take years to grow. The Supreme Court has also already ruled that all the trees have to be transplanted which is almost an impossibility and thus impractical.

Another major issue is that in the case relating to private forests, recently the Supreme Court has ruled that not a single tree should be cut in Goa and thus it is fairly clear that the same yardstick should apply to trees in the Mopa plateau, which are mind boggling.  The Supreme Court seem to be very clear that trees cannot be felled be it for private parties and thus also for the government. Besides, cutting of so many trees is very greatly going to alter severely the eco-system of the entire 2,133 acres of land which is going to be affected. It would be pertinent to emphasize here that there are also a number of medicinal plants growing in the Mopa plateau.

As far as the exotic fauna of the Mopa plateau is concerned, it is documented that the area is home to the bison, civet cats, porcupines, wild boar, tigers, pangolins, peacocks and macaque among other varieties such as varied birds, squirrels and butterflies. Endangered species such as these have to be protected from extinction.

The compensation paid to the peasants of Mopa is a measly `300 per square meter while the market value of the land is at least `6,000 per square meter and the government is trying to cheat the poor peasants of Mopa by bullying them of their precious land which they can till for agriculture and conduct their occupation of cattle rearing which is a permanent occupation.

It may be noted here that more than half the peasants of Mopa have still not accepted the meagre compensation being thrust upon them. Land is not being made any more and therefore it is the bounden duty of the government to prudently preserve especially pristine forest land since global warming and climate change are issues that need to be tackled to save the earth for posterity. Moreover, if the Mopa airport comes up land prices may skyrocket to `50,000 to `75,000 per square metre and it will be only the land sharks and speculators who will benefit, while the peasant land owners will bear the brunt because their meagre compensation will mean that they will not be able to survive in the area due to rise in the standard of living in the region.

Goa is facing a major shortage of potable drinking water despite this year having seen more than 150 inches of rain and in this context destruction of the 46 crystal clear water springs of Mopa which have also medicinal therapeutic properties would be a catastrophe as also subjecting the entire area to man-made disaster while failing to protect natural eco-system.

It may be recalled that the government built 14 2BHK houses at Casarvarnem in Pernem for displaced Dhangar families at a whopping cost of `25 crore and that the plaster of the ceiling and the wall began to disintegrate and crumble days after they inhabited these houses and that they shifted back their residences to the cow sheds. Also, these houses should not have cost more than `50,00,000 each meaning that the 14 2BHK houses built should have at the most cost `7 crore and thus large scale corruption seems to be involved in the construction which definitely is of substandard quality.

The imposition of the Official Secrets Act is another attempt of the government of Goa to clandestinely fast track the construction of this civilian airport. Official Secrets Act should not have been invoked except if the airport was for military purposes. This clearly exposes the sleight of hand of the authorities.

Another issue was the enacting of the Mopa Airport Development Authority Bill, 2018 that prevented the peasants of Mopa from opposing this project by demonstration. This measure clearly exposes the sinister designs of the government and is a measure that is not acceptable in a democracy.

As far as jobs are concerned, the cream of the jobs like air traffic controllers, ground engineers, pilots, air-hostesses will not be given to the Goans and hence it is clear that the airport should be shifted to any other arid location in neighbouring Maharashtra or Karnataka. Goans are not going to be benefitted by this project.

The issue of destruction of the eco-system and the environmental degradation of the Mopa plateau have to be highlighted since construction of the Mopa airport will lead to air, water as well as noise pollution in the entire Mopa and its surroundings. Mopa should be preserved as a pristine rustic abode.

The entire of Mopa plateau will be commercialized by selling land around it to speculators for sheer lure of the lucre and thus the hardest hit will be the 8,000 odd peasants of Mopa who will lose their precious land forever.

Also the government is aiding and abetting the depraved culture of gambling by saying that they will shift the off-shore casinos to Mopa, thus destroying the fabric of Goan society and encouraging fast money from gambling activities.

Another important aspect is that tourist footfalls are decreasing in Goa and thus Dabolim airport in Goa could cope up with the air traffic density at least for another 20 years. Also tourists come to Goa for its greenery and scenic beauty such as the beaches, churches and temples and therefore it would be not prudent to destroy the exotic flora and fauna of Mopa which is an extension of the western ghats and an United Nations conservation area that needs to be preserved.

As the equation stands today, the Supreme Court’s assessment is loaded heavily against the Environment Clearance being given to the Mopa project as severe lapses have been observed on the part of the Goa government, GMR and the Ministry of Environment, Forests and Climate Change (MoEF&CC). The Environment Impact Assessment has been questioned by the Apex court as well as the Expert Appraisal Committee (EAC) of the MoEF&CC has been subject to censure by the Apex court with regards to the Environment Clearance. A consistent stand by the Supreme Court will mean the scrapping of the Mopa airport project.

Credit should be given in particular to the Federation of Rainbow Warriors, the Mopa Vimantal Pidit Xetkari Samiti as well as the Goa For Dabolim Only (GFDO) and certain individuals for having resisted the attempts made to fast track the Mopa airport project on affected stakeholders.