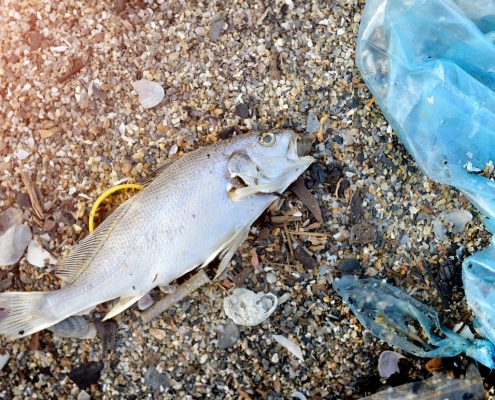 The tones of plastic waste left behind on beaches, ranging from plastic liquor bottles to wafer covers, end up in the stomachs of marine life causing severe gastro-intestinal problem

Plastic products play an essential role in people’s lives around the globe. Plastics are useful because they are durable and light weight. However, the durability of plastic and its ability to float on the water can endanger marine life., Taking a stroll along the beach paints a clear picture of our staggering addiction to the use of plastics. Moreover, the adverse impacts of plastic on marine life can be seen in the animal carcasses lying along the beaches. According to a Plymouth University study, plastic pollution affects 700 different marine species. Other estimates have suggested a death toll of at least 100 million marine animals annually, due to plastic pollution.

A staggering number of animals die as a result of plastic pollution in the marine environment. The list is so long that we cannot exhaust it in one article. What follows is a brief discussion of impacts on some of the most affected marine creatures

Plastic pollution negatively impacts almost every living organism in the world’s oceans. Because we are the source of plastic pollution, human beings must take action to improve the quality of life for marine animals. We should minimize the use of plastics in our daily lives and recycle the waste as much as possible. When visiting the shore, we need to make sure that plastics are properly disposed of. Even those living in landlocked areas need to be aware that balloons and plastic bags can blow for miles—creating risk for all aquatic creatures and should be safely disposed.
Plastic pollution in marine life is just one of the many issues our planet faces. At Pegasus Foundation, our number one concern is preserving our beautiful Earth and all its species. One way we do this is by helping non-profit organisations create partnerships and work to educate the public as we join forces to build a more conscientious world. Contact us to find out how you can help!

Different plastics spread throughout the ocean. As Styrofoam breaks into smaller parts, polystyrene components in it sink lower in the ocean, so that the pollutant spreads throughout the sea column.
In fact, not only do the toxins in plastic affect the ocean, but acting like sponges, they soak up other toxins from outside sources before entering the ocean. As these chemicals are ingested by animals in the ocean, this is not good for humans. We as humans ingest contaminated fish and mammals.
There are different types of ways that plastic is dangerous for humans. Direct toxicity from plastics comes from lead, cadmium, and mercury. These toxins have also been found in many fish in the ocean, which is very dangerous for humans. Diethylhexyl phthalate (DEHP) contained in some plastics, is a toxic carcinogen. Other toxins in plastics are directly linked to cancers, birth defects, immune system problems, and childhood developmental issues. To learn more on effects of plastics on humans visit the https://ecologycenter.org/plastics.
Other types of toxic plastics are BPA or health-bisphenol-A, along with phthalates (mentioned above). Both of these are of great concern to human health. BPA is used in many things including plastic bottles and food packaging materials. Over time the polymer chains of BPA break down, and can enter the human body in many ways from drinking contaminated water to eating a fish that is exposed to the broken down toxins. Specifically, BPA is a known chemical that interferes with human hormonal function.
Rolf Halden, associate professor in the School of Sustainable Engineering and Arizona State University has studied plastics adverse effects on humans and has thus far concluded that and exact outline of health effects of plastics on humans is almost impossible to determine. This is due to the fact that the problem of plastic contamination in humans is globally spread; there are almost no unexposed subjects. That being said, it is evident that the chemicals are not healthy for humans. To learn more about the impact on humans see Plastic Pollution Affects Human Health in Unseen Ways on page 14 and Impact of plastics, a note on Halden’s studies on plastic at Arizona State University on page 15.