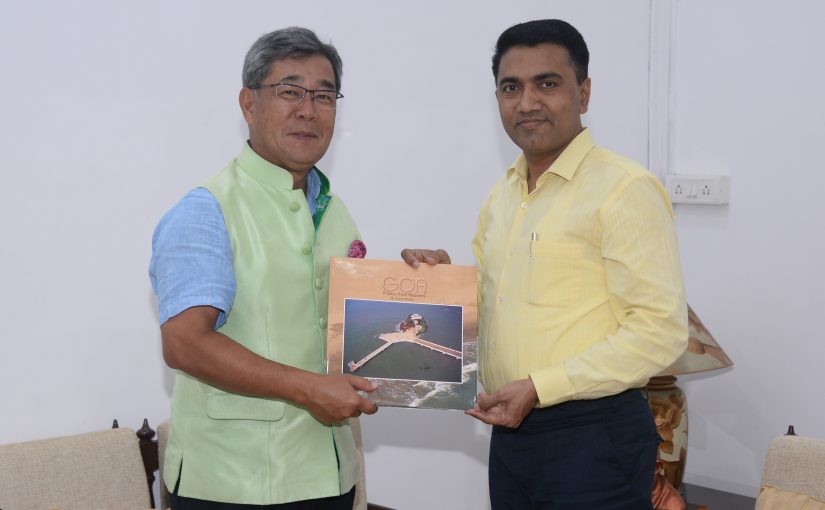 CHIEF Minister Pramod Sawant has been carrying on the legacy of his predecessor Manohar Parrikar by governing cash strapped Goa very autocratically, with no transparency and accountability whatsoever. The now launched Vibrant Goa Foundation is the latest of this government’s many scams and a sheer act of utter bad governance. In the name of promoting business avenues in Goa, this private venture has been arbitrarily handpicked and assigned the task without any laid criteria or parameters whatsoever.
The selection shoujd have been by an open tender and not a very close door BJP choice. This unnecessary, questionable and very high-handed drain on the State exchequer is bound to figure prominently in the next report of the Comptroller Auditor General (CAG). It is high time the Chief Minister Sawant realizes that government’s agenda and schemes should be people- centric and not to accommodate party cadres. Why couldn’t the government have entrusted this task of promoting industries and business ventures to the very experienced and knowledgeable besides reputed Goa Chamber of Commerce & Industry which possesses all the expertise and knowledge in the field?
Pramod Swant would have to account for how he has recklessly and in mala fide way doled out two crore of taxpayer’s money to Vibrant Goa without any rationale whatsoever. Besides government corporations who are financially already bankrupt have also been asked to chip into this Vibrant Goa loot and plunder. Does the chief minister need to be told that government needs to be cautious and careful while spending every paisa from the State coffers?
Manohar Parrikar left Goa in dire straits and if Pramod Sawant does not take cogent corrective measures, an already sinking Goa is going to land into a further disastrous and irreversible state of administrative chaos. Mr Chief Minister, Goa will never be vibrant as long as your motley government is always vibrating!
— Aires Rodrigues, Ribandar

FEELING SORRY
WHAT made Zuari Agro Chemicals stop production is still not clear. Economic slowdown, cash crunch, rupee devaluation, less stretch on agriculture, movement against chemical fertilizers and Marwari brain, can be one of the reasons or combination of all. But may be new Nobelite Banerji can “Blame it on Modi” and can sell Zuari (rich people) and give Rs 72,000 per year to Goans (poor people).
In ‘70s Zuari was the best option for employment, better than banks, government, Ciba and MRF. Besides mines, there were hardly any jobs available. People used to work for Dempos, Chowgules, Timblos and Salgaonkars for years without much benefits and ZACL changed the situation and dreams and bright future were on the horizon for Goan youth.
I am saddened by the closure of Zuari because it taught me hard work, industry culture, discipline and petrochemical functioning power. It helped me to get jobs in IPCL (Baroda, which I didn’t accept), BAFCO oil refinery (Bahrain), Gasco NGL plant (Abu Dhabi) which I accepted and prospered. Zuari is still in my heart and I am grateful for opening the door for jobs abroad.
— Vishwas Mahambrey, Goa (courtesy Facebook post)

BJP POTHOLES
NEVER have the streets of capital city Panaji been so terrible. On my two-wheeler I find myself taking longer routes to avoid back-breaking potholes. Babush Monserrate may be patting himself on the back for his historical coup de tour in opening up the “chicken neck” constriction near Hotel International on way to Caranzalen, but it’s a job so shoddily and unevenly done that few Ponjekars dare to take this short cut route after 7pm.
Plus, it’s a story of ineffective street lighting all over and after 7pm Panaji is reduced to being a horrible ghostly dim-lit town of impoverishment. What progress is the BJP government talking about? The copious PRgiri may be digital India full steam ahead, Swachh Bharat full steam ahead, open defecation free Goa full steam ahead…what a lot of hollow and empty drumbeats for a country high on grand slogans, but with very little to see at ground level by way of quality of public life in one-time lovely riverside town Panaji!
And yet there seems to be public money around for grandstanding red-carpet events and celebrations of a pretentious royal kind. After 70 years aam aadmi is still waiting for decent public roads, streets, pavements, gutter system, sewage system, lighting…to be on par with the developed countries – where our politicians are only too happy to go junketing every now and again at taxpayers’ cost.
— Pankajbala R Patel, Tonca

STRICT BANKING NORMS REQUIRED
To prevent depositors in Banks losing their money it would be recommended that very strict banking regulations should enacted.
For example, an alarm should be sounded when any bank has reached the level of 80% of the total depositors’ aggregate. When the level goes down to 75% another louder alarm has to be sounded and final alarm when level reaches 70% so that at least 70% of all bank deposits are made available to all those depositors who have invested their hard earned money.
In fact, if a bank is incapable of making profits over long to medium period of time, that particular bank should put in their papers and call it a day. The particular bank, public or private, should be given guarantees by its Board of Directors, the Reserve Bank of India as well as the government who have to assume proportionate responsibility for the downfall of a bank.
As it is, the banking fixed deposit interest rates as well as savings bank accounts rate have reduced drastically and therefore any management incapable of making profits should not be allowed to function. Notwithstanding non performing assets, it is the duty of every bank to work and accrue profits of least 10% to 15% per annum in the most testing of times. It would be a tragedy if wealth creators become well losers and so that this does not happen banking as to be very strictly controlled.
In favourable regimens like those prevailing now profitability has to become the responsibility of the particular bank, the RBI and the goverment.
If the government levies high GST rates on businesses, why should they not be able to prop up the banking system?!
— Stephen Dias, Dona Paula

SALIGAONKARS FIGHTING
The Taleigao strongman/MLA of Panjim, Shri Babush Monserrate after threatening the villagers of Saligao with retaliation for stopping many leachate flowing/stinking/uncovered garbage trucks on Sunday heading to the plant from different parts of Goa (which includes trucks from Panaji and Taleigao) has now reportedly sent back 22 loaded sewage tankers on Wednesday which had arrived from the same plant at Tonca from Baga-Candolim-Saligao belt with the help of CCP Mayor, Uday Madkaikar in a ‘tit for tat’ type of action-replay and knee-jerk reaction. Looks like Mr Monserrate wants to treat Saligao village like a complete separate rogue country like Pakistan without understanding the ground reality by portraying all its villagers as misguided, uneducated roadside-goons, if not big villains to somehow force them to allow villagers of North Goa and other parts of Goa to transport filthy/leachate flowing/stinking garbage trucks through their village to the plant in the same unhygienic manner to turn their beautiful village into a permanent full-fledged “Garbage-Gaon”.
Well, whether Minister for Waste Management Michael Lobo wants to misuse the sanctioned money of Rs 82.15 crores for the expansion of the plant or Saligao MLA, Jayesh Salgaonkar had approved the same expansion as a Cabinet minister during a meeting held on Feb 18, 2019 or is currently trying to rejuvenate his sagging political career raising this issue (as per some local media reports), we the people of Saligao are least bothered. The reason why we are still fighting against the expansion of this nuisance-creating plant is to save the deteriorating environment of the village. An important promise was made at the time of setting-up of this plant by the late Manohar Parrikar, former BJP MLA Dilip Parulekar of treating garbage only from Saligao and Calangute. However other parts of Goa were also allowed to slowly bring in their stinking garbage at the plant for the so-called ‘treatment’ by backstabbing us and buying a few prominent individuals from our own village with hard cash.
The ongoing movement should be led by villagers from Saligao who really love their village. Many unsung Saligaonkars have rightly fought silently against the setting-up of the plant on the Saligao/Calangute plateau in the past and will keep fighting even in the near future as the same is (as was anticipated from the start) slowly destroying Saligao. Let the ongoing fight remain a fight against all political liars and against the un-kept promises of all our self-centered corrupt cheats/known backstabbers of our own village of Saligao forever… Long live the unity of our Saligao Foxes….
— Jerry Fernandes, Saligao