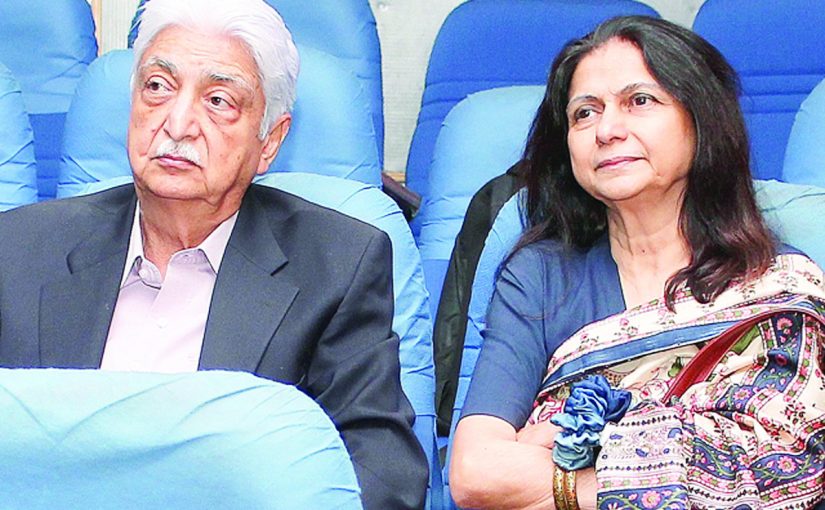 GIVE BACK: A classic example of corporate social responsibility is the invitation to Azim Premji’s son’s wedding which requested that any gifts be given as funds for building schools for the girl child

Philanthropy is not charity. Any charity should be aimed at making the beneficiary independent. The classic example is the help extended for water harvesting by the Infosys foundation

There is much to celebrate in Indian philanthropy at present. News headlines and informed opinion concur that religious and secular charitable giving, and philanthropy by businesses, foundations, and wealthy individuals are growing apace. Newer forms of social investment such as venture philanthropy and social impact bonds, mandatory corporate philanthropy, a thriving social enterprise sector, and every conceivable variety of “retail” fundraising—including crowdfunding platforms, giving circles, and telethons—are springing up across a rapidly changing landscape. And Indian philanthropy is slowly diversifying; independent media and scientific research, among other themes, are drawing greater interest from donors. Bill Gates described the phenomenon as “a miracle of domestic resources coming out of the lower middle-income countries like India.”
Nonetheless, despite efforts by Bain & Company, Dasra and others, strong, reliable data about philanthropy in India has remained elusive. A recent Philanthropy for Social Justice and Peace (PSJP) paper by Caroline Hartnell, however, offers some new insights into the current state of the field. The paper examines the diverse range of voices and activities that characterize India’s philanthropic landscape, and posits some hard questions about philanthropy’s role in a country with such deep social and economic divisions.

As elsewhere around the world, wealth is concentrating, and inequality is growing in India. And inter-religious violence and hate speech are growing as a result of fake news and increasingly majoritarian politics.
But while students, farmers, and marginalized communities across India are mobilizing against unjust or failing policies, the most rapidly growing philanthropic activities lean away from, rather than into, these causes or the entrenched effects of patriarchy, caste, and feudalism more generally. Education—especially top-down, technocratic interventions—and direct service delivery in nutrition, health, and sanitation still account for the bulk of philanthropic spending.

As international aid agencies have withdrawn from India and international donors come under greater scrutiny and constraints, India’s social sector finds itself increasingly dependent on business and donor wealth generated through business. This heightens the preference for short-term, easily measured, photogenic forms of charity over complex, community-led movements for change that seek to address the root causes of injustice, exclusion, and exploitation.
While a new appetite among nonprofits for cross-sector collaboration—in pursuit of impact at scale—is heartening, a social sector almost wholly dependent on business and government for its existence will doubtless be wary of expressing criticism of either.
This means, for instance, that prosperous states such as Maharashtra, where many large Indian businesses are headquartered, receive much greater contributions from business (as mandated by the 2013 Companies Act) compared to less-developed states, which often lack basic services. And predictably, almost no funding goes to communities or issues perceived to carry any risk of causing political offence.

The current surge in giving is also throwing into sharper relief the underdevelopment of India’s philanthropic ecosystem. While my organization—the Centre for Social Impact and Philanthropy (CSIP) at Ashoka University—and others are working to close some of the critical information gaps, philanthropic support for research, convening, organizational investments, capacity building, and other important services remains paltry.
A lack of knowledge and networks continues to hamper the effectiveness, efficiency, and credibility of the philanthropic sector, leaving critical decision-making and public discourse vulnerable to whims and ideology. It also results in a near absence of norms beyond government mandates, and there are virtually no mandates related to donors compared to recipients. Absent, for instance, are standards for nonprofit CEO compensation or codes of ethics for fundraising. Likewise, there are no transparency requirements akin to the United States’ Form 990 or Glasspockets initiative, or coherent definitions of board roles and responsibilities. And while the need to raise resources or comply with donor reporting requirements provides some incentives for nonprofits to become more accountable, there is, as yet, no similar pressure on philanthropies. In addition, nurturing talent through philanthropy has only recently gained interest, as both grant-makers and grantees find their impact limited by the availability of human resources. And most significantly, the lack of infrastructure makes it difficult for the sector to fashion a coherent narrative of its role and value to Indian society. This leaves it voiceless in shaping the policy environment on which it depends for survival—not to mention scale and sustainability of impact.
Ultimately, there is a timidity of Indian philanthropy in the main — demonstrated by its lack of support for politically contentious causes and activists. It must surely be clear that defending core democratic freedoms and the space for civil society to freely operate have intrinsic value beyond their more pragmatic consequences for rule of law, governance, and accountability. Even as news headlines highlight growing assaults on minorities, rationalists, defenders of human rights, the environment, and accountability, support for these groups in India is limited to a few friends and allies. What will it take to multiply and amplify philanthropic champions of these complex and deeply rooted issues?

To start, India needs more independent media, more civil society voices, more platforms for civil discourse, and more education in citizenship. The country sorely lacks the kinds of philanthropic and civil society networks and platforms needed to mitigate the political risks individual organizations believe they are unable to bear. One point of light is the vast phenomenon of grassroots giving that sustains thriving movements that guard the frontlines of Indian democracy—far beyond crowd-funding platforms and corporate social responsibility summits. The formal nonprofit sector could learn a lot from largely self-funded movements such as the Right to Information, right to food and work, or net neutrality, for instance.
Collaboration among like-minded groups can do much to transcend silos. Examples include our own Ashoka University, which brings together more than 100 donors to create a world-class, nonprofit, liberal arts university; an initiative to improve access to justice created by Dasra, Tata Trusts, and Daksh Foundation; and philanthropic collaboration that created the Independent and Public Spirited Media Trust, which seeks to support journalism for social impact and a diverse media ecosystem.
We also need to repair the deep, wide, and dangerous schism in India’s social sector—between community-led movements fighting for basic rights and survival (with the political clout to make change happen and to make it stick), and the technocratic, apolitical models that attract the vast majority of the financial resources. To accomplish that, philanthropy and civil society will need to go much further in reaching across divides of ideology, language, and trust to find common purpose.