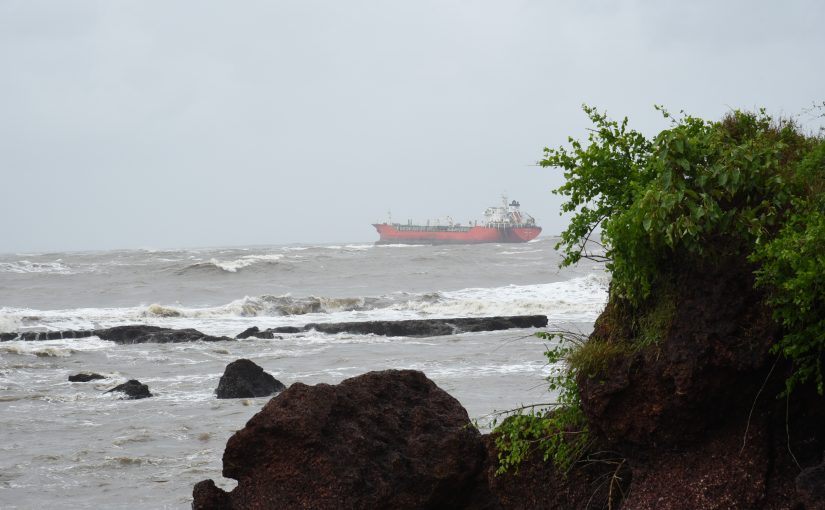 TICKING TIME BOMB: Its current perilous position is nothing new to the Nu-Shi Nalini. Last June an explosion in the engine room claimed one life and the crew had to be evacuated because of the danger of naphtha leakage. More than a year later the danger has been moved from Kochi to Goa thanks to our criminally incompetent and short-sighted decision makers

Goa seems to have become the junk yard of choice for unwanted and dangerous waste. How else can we explain how a naphtha-laden, abandoned ship, that had already claimed the life of one person in an explosion, and that authorities in Kochi considered hazardous, was moved all the way to Goa while those responsible for it were wrangling over who should bear the cost of making it safe?

Goans will easily recall the sordid saga of the River Princess, stranded off the Goa coast not too far away from Taj Aguada at Sinquerim. It took a decade and more to get this vessel out by actually cutting it, more than 10 years after it was grounded. She was finally cut into pieces at a cost of crores of rupees paid by the government but obviously from money that came out of public pockets.
Dr Joe D’Souza and I studied the impact this ship had on Goan ecology and the ecosystem around Candolim and showed that the oil leaks had damaged the marine diversity, on North Goa beaches.
Now, is the turn of the “Nu-Shi Nalini “ owned by Aryan Charterers Pvt Ltd, Mumbai carrying naphtha cargo shipped by BYCO Petroleum Pakistan from Karachi Port to Budge Port in West Bengal. Nalini has crashed on to the rocks near the Raj Bhavan. The worst part of this story is that this disaster has been a year in the making and was foreseen by administrators in other states. Why were we taken unawares?!

WHO IS TO BLAME?

The vessel, under the ownership of Arya Ship Charterers Pvt Ltd was floating off the Kochi coast since June 13, 2018, after an explosion in the engine room killed one of the crew members. The ship was evacuated following the detection of naphtha leakage, which could have triggered a major explosion. After the alarming calls made by the Kerala state administration during Cyclone Gaja, the salvage operations started in January and 85% work was completed by April this year. However, the remaining work of transferring the cargo to another vessel, reportedly the riskiest part, was halted following payment issues between the salvor Lots Shipping Pvt Ltd and Mumbai-based subcontractor Reliable Marine & Logistics Pvt Limited.
Naphtha-laden Nalini remained near Cochin for eleven months and was later abandoned by the charterers. Despite being in the news as a ticking naphtha-time-bomb it was welcomed by someone in Goa and landed at Mormugao Port Trust somewhere in July this year. The silently ticking bomb, thanks to Cyclone Kyarr, let loose off the Goa coast last week and has now reached its final count down. Just as River Princess was abandoned and grounded on June 5, 2000 and remained grounded off the Sinquerim coast.
Nu-Shi Nalini is a threat to Dona Paula coast. Hopefully this vessel Nalini will say goodbye to the fisherfolk of La Marivel village who are completely dependent upon their fishing activities. The poor fishermen first faced cyclonic weather and now it is Nalini which is sitting like a queen on a rock near the shores of Marivel beach presumably with naphtha in her belly and nobody knowing when her belly will blow up.
Another vessel we had was the (un)Lucky Seven which was grounded and reached the shores of Miramar Beach and created havoc for all of us. International laws were flouted and still, talks are going on for Nalini to pump out the naphtha but no proper study is done and everything is on trial and error basis.
All those responsible for this mishap whether it is Capt of Ports or MPT Chairman have given permission for her entry when all other ports in the country refused entry to unload the naphtha. Why is only Goa always available for unwanted things to enter our state? Even coal required in Karnataka is transported through Goa by the Adanis and others. Why did our MPT chairman agree to unload naphtha here? Why is the government waiting so long and not taking any action against the chairman? It looks like Goa is the only state in the country to allow any and all such vessels to enter the port regardless of the danger to its citizens.
As a former scientist from NIO having vast experience in scientific research vessels and having participated in near-shore surveys in boats I believe I can suggest steps to be taken by the government to safely retrieve this ill-fated vessel off the Dona Paula shores.

The following steps may be taken to achieve the best results:

Now I understand that the authorities decided not to use the diesel pump generator which earlier failed (it seems due to helicopter vertical oscillations). Plans are now on to mount an electronic hydropower pump to be positioned on a barge next to the ill-fated grounded vessel Nu-Shi Nalini. It is likely to start the pumping out operation by tomorrow, November 2, if weather permits. A trial run of a newly procured electronic hydropower pump on the barge must be done separately before taking it near the vessel to ascertain its safe operation for retrieving the hazardous and corrosive chemical and heavy oil from Nalini.
Chief Minister Pramod Sawant appears to be confident that after this operation she may float and tow the vessel within 15 days’ time after doing all checks of deck machinery and permissions obtained from Mercantile Marine dept (MMD), to tow the vessel safely. The collected naphtha is likely to be loaded to a mother ship on the way to United Arab Emirates ( UAE) which is yet to arrive. This is a high-risk operation and every step taken must be executed with caution.
Meanwhile, in another cause of concern, the Indian Meteorological Department (IMD) has issued a yellow alert warning across the state that there will be a possibility of heavy rains and wind with speed about 50 km per hour or more in the first week of November.

Marivel fishermen say their livelihood has already been affected due to bad weather and now it is the grounded Nalini which is creating hindrance in their fishing activities. However, finally desperate to resume their livelihood they have now managed to go out.
A number of rounds are being taken by naval helicopters which are encircling around the vessel and conducting aerial surveys to check if there is any risk of involvement or danger before the pump operation begins for any eventuality.
I have been visiting this site at La Marivel colony every day to check the status of this ill fate vessel Nalini and upon my inquiries from the fishermen, I was told that nothing has been done to achieve best results, but that the local MLA Jennifer Monserrate keeps on coming to check on any progress.
During my visits I noticed a high-level building just in the vicinity near the beach — like a watchtower. The deputy collector has instructed his personnel to keep a watch on this vessel for any eventualities and report to him.
I interviewed these watechers and found persons like a forest guard, fire brigade personnel and security staff and police stationed at this tower. They are not happy about staying for a longer duration as there are no toilet facilities, and safety gear like masks, oxygen cylinders, fire extinguishers, and other safety gear have not been provided. They said even walkie-talkies have not been provided to them. They are forced to use their personal mobiles to contact their superiors. A lady inspector is likely to join them on the 1st or 2nd and they expressed concern about the lack of a toilet for the lady.
If there is any fire or fumes or a naphtha leak these brave men can only pray that God will help them. All the Raj Bhavan families, including the Lt Governor who is likely to join his duties very shortly, will be affected if there is an explosion on the ill-fated cargo vessel.
I hope my suggestions to the competent authorities may help to a certain extent to tackle this issue to retrieve this vessel at the earliest possible time. And long term I hope there is introspection on how such a state of affairs came to pass — how an abandoned tanker, clearly a threat to life and the environment, was allowed to remain a danger while legal wrangles went on, and then was moved all the way to our beautiful, hospitable State. Those responsible must be punished as a deterrent. Goa is NOT a junkyard for unwanted and dangerous waste.